People of faith had good reasons to rejoice as the golden statues were handled out on Sunday, Feb. 26. Despite all the silliness over who was wearing whose gowns and the overly gushy compliments ladled out by the interviewers on the Red Carpet, what transpired inside the “Bankrupt Theater” (Billy Crystal’s remark about the dropping of “Kodak” from the name of the Theater), the 84th Oscar Awards brought some surprises and lifted up some deserving films and performances. First, the reasons for joy.

The surprise for some was the choice of a foreign film with almost no dialogue as “Best Picture.” In a recent article about the Oscar Nominations I wrote this about the film (the following capsule reviews are from my “Oscar Good News” article):

The Artist
Rated PG-13. Ecclesiastes 9:11-12; 1 Corinthians 13:4a
This blend of A Star is Born and Singing in the Rain is a delight to see, with no audible
dialogue until the end. Set in the late 20s when sound is being introduced to motion pictures, it
is the story of a fall of a silent film actor and the rise of the young actress whom he helped
break in to the profession. Themes of love, grace and the danger of pride are well developed.
The latter “preaches” well, with the pulpiteer pointing out how most of us prefer to be on the
giving end, but that at times we must become humble enough to admit that we need help, and
then to accept it.

The film earlier in the evening was given four other Oscars, Best Director, Best Actor, Best Original Score, and Best Costume.

I was especially pleased with the selection of Undefeated for “Best Documentary Feature,” having received the screener disc last week and finding so many rich scenes of a high school football coach imparting to his players life lessons of perseverance, faith, and hope. (See my review either at http://visualparables.blogspot.com/  or a version for subscribers that includes discussion questions at visualparables.net.)

Actor/Director George Clooney’s excellent The Descendents, won just a single Award, but a significant one, “Best Original Screenplay,” garnered by screenwriters, Alexander Payne, Nat Faxon, and Jim Rash. Here is my capsule review showing why people of faith should see it.

The Descendants
Rated R. Matthew 18:2; Psalm 24:1-2.
Grace, responsibility to the land, and family reconciliation—director Alexander Payne’s film, set in Hawaii has all this and more. (See an earlier blog for the “more.”) George Clooney’s character exercises such restraint at two key moments in the film that the would be a good example to use when preaching on the kenosis passage in Philippians 2, or any time one is dealing with Jesus “emptying himself.

One of my favorite films of the year won four Awards, but mainly in the technical area–Best Art Direction, Best Sound Mixing, Best Sound Editing, and Best Visual Effects. I was hoping the Martin Scorcese would get the nod for “Best Director.” My thoughts on Hugo:

Hugo
Rated PG. Psalm 82:3-4; Isaiah 11:6d
An orphaned boy secretly living above the concourse of a Parisian train station during the
1930s discovers his purpose in life—to fix a complicated automaton left by his father and,
ultimately, a broken man.

The flawed but still wonderful The Help was honored by the awarding of “Best Supporting Actress” to Octavia Spencer for playing the delightfully feisty maid Minny Jackson, who put the you know what into the pie given to her racist employer. My take on this:

The Help
Rated PG-13. Psalm 146:7b-9; Proverbs 31:8.
This civil rights era story set in Jackson Mississippi affirms the importance of sisterhood and of
the support of the church (that is, the part of the church faithful to the gospel, the black church) for the black maids and the white writer in exposing racism in the domestic workplace. Be sure to check out Lawrence Dunbar’s poem “We Wear the Mask” for use in a study session or sermon in which you deal with this film. Feminists will love the sisterhood that grows among the women.

And then there is, of course, Meryl Streep, up for what, as I recall, her 17th Oscar nomination. I also regard her as the greatest actress of our generation, and though Iron Lady is not one of my favorite films because of its subject matter, her skill and hard work at impersonating the subject of the film deserves the recognition it has received from the Academy. However, as I say below, her win also was a disappointment.

And thus let’s begin with this disappointment–that Viola Davis was passed over for the “Best Actress” award. Her performance as the quite and patient maid Aibileen Clark was one of the most memorable of a string of great performances–remember her in Doubt as the desperate and loving mother who saw a possibly pedophile priest as a life saver for her son, picked-upon because he was gay ? We can only hope that she will secure more roles that will convince Academy voters what a great actress she is.

Another disappointment was that Demian Biehir, who played the sacrificing father in A Better Life was passed over for “Best Actor.” Even though understandable in that this was his first nomination and that the film was relegated largely to the art house circuit, still I wish the voters had surprised us by choosing him, and bringing to a wider audience such a richly rewarding film about an illegal immigrant in southern California who gives up so much to give his teenaged son “a better life.” Given the bitter divide in our nation over the subject of illegal immigration, this film can remind both sides that there are human lives at stake in the outcome of the conflict.

Three films that fit into my category of the “Entirely Passed Over” are  Extremely Loud and Incredibly Close; Harry Potter and the Deathly Hallows: Part2; and Tree of Life. The first is a wonderful quest/journey film in which a grieving and guilt ridden boy is trying to connect with his father who perished in one of the Twin Towers:

Extremely Loud and Incredibly Close
Rated PG-13. Running time: 1 hour 35 min.  Isaiah. 66:13, Matthew 5:4
This powerful post 9/11 story about grieving 11 year-old Oskar begins on the day when the planes brought the Twin Towers down. The boy does not answer the phone when his father, trapped high up in one of the Towers, calls home, so there is a measure of guilt in Oskar’s obsessive search later to find what a key he finds in his father’s closet might fit. A year later his search takes him to all the boroughs of Manhattan where he meets an assortment of people with their own needs. He soon is accompanied by the mute old man living across the street in a room he rents from the boy’s Grandmother. The boy, who might be on the edge of Asperity’s, is portrayed by newcomer Thomas Horn who even overshadows the great cast of veterans—Tom Hanks, Sandra Bullock, and Max von Sydow. An extremely good and close to the heart movie!

The Harry Potter film is perhaps the best of the series, one suffused with themes from Christian theology, interestingly enough summed up by the villain when he and Harry finally meet face to face, “Harry Potter, the boy who lived… come to die.” I wish it could have won at least one of the technical awards. However, I am consoled not only by the fact that so many fans have already seen it, but that many of these folk will be returning to it again and again through the years.

This probably will not be so for Terrence Malik’s wonderful film, the least seen of the nine films nominated for “Best Picture” because his non-narrative style is difficult for many film goers to fathom. However, as the most theological of all of last year’s films, I wish it could have received more than just a nomination. Those of us who did appreciate this complex, theological film will just have to keep trying to convince our friends that they need to see it.

The Tree of Life
Rated PG-13. Job 38:4-7; Matthew 5:45b
Terence Malick’s film can be seen as a visual meditation on the Job passage, the text of which
we see on the screen at the beginning of the film. Departing from the usual narrative structure,
the film includes scenes of a family living in Texas in the Fifties, with the themes of law and
grace of great beauty. The director even inserts the creation of the universe from the Big Bang
through the dinosaurs, and a family reunion beyond this life. The mother as “grace” and the
father “as law” lend themselves to a discussion of some of the themes of Paul in Galatians and
Romans.

How did you feel at the end of the Awards broadcast–besides sleepy, that is? Perhaps like myself, you felt a mixture of joy and disappointment. Those of you who are preachers, teachers, and youth leaders will find rich treasures in all of the above films. And now, begins the Oscar watch for 2012. Will the delightful, currently showing, Big Miracle be noticed by members of the Academy–and by people of faith. 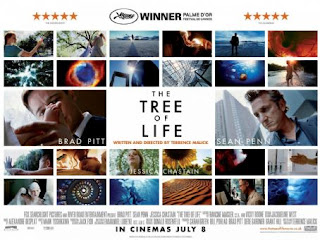