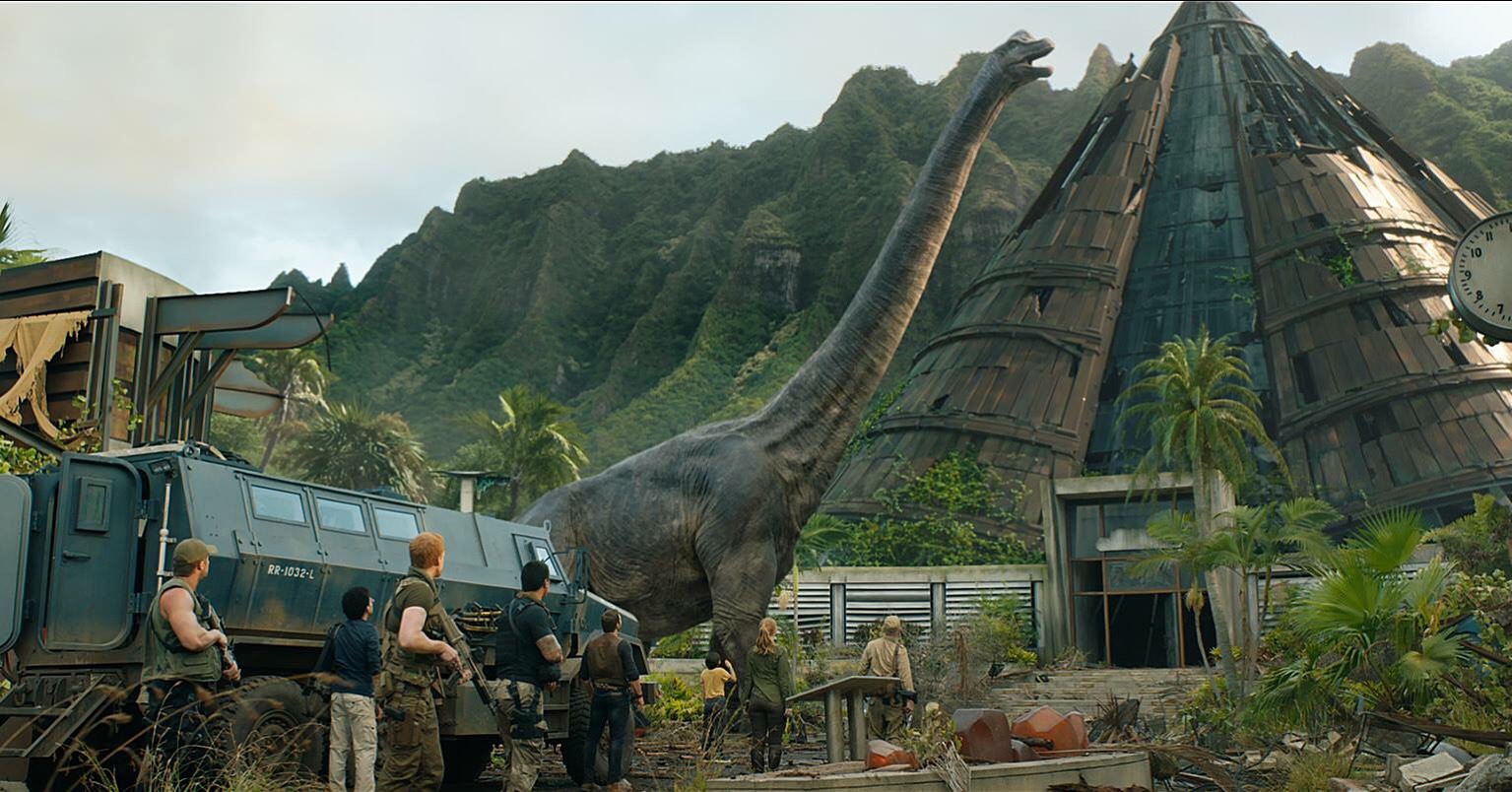 Then they said, “Come, let us build ourselves a city, and a tower with its top in the heavens, and let us make a name for ourselves

Yes, we have been down this dinosaur-crowded road before, but the public fascination with the huge “thunder lizards” is so great that the Universal honchos could not resist the box office lure—and they’ve proved to be right by the figures reported on the IMDB website, a world-wide take of over ¾ billion dollars!

The story this time, unfolding three years after the park has been abandoned, is a race against time to save the creatures on Isla Nubar before its tall, erupting volcano destroys all life on the verdant island. The government has nixed any rescue attempt because of the danger of the dangerous creatures breaking loose somewhere, but at the beginning of the film the Mosasaurus, a giant sea creature has already escaped from the island’s lagoon.

Back is former Park Manager Claire Dearing (Bryce Dallas Howard), Velociraptor trainer Owen Grady (Chris Pratt), working for Benjamin Lockwood (James Cromwell), the super-rich Northern Californian who had been JP’s founder John Hammond’s partner. There are villains aplenty seeking riches by auctioning off the valuable animals for millions to unscrupulous men from around the world. A new breed of animal called the Indoraptor has been developed for possible use as a weapon for some dictator’s army, much as Hannibal employed elephants in his war against the Romans.

Once the animals and humans make it off the doomed island (barely) the action shifts to Lockwood’s towering mansion. We also meet another new character, middle-school-aged Massie, supposedly Lockwood’s granddaughter, who will add to those needing to be rescued numerous times, as well as complicating the backstory of Lockwood’s past relationship with Hammond. She does something crucial, reversing a decision by the adults.

I haven’t mentioned yet Blue, the Velociraptor raised and trained by Owen, but of course it is back and will prove crucial in a long chase and fight sequence atop the storm swept roof of the mansion. Also back from previous films is Jeff Goldblum as Dr. Ian Malcolm, this time only as a witness before a Senate investigating committee and not entering into the action itself. His role is to comment on the situation, at the first hearing agreeing that the government should not try to save the dinosaurs from extinction, that Nature might be correcting the mistake made by John Hammond when he cloned the dinosaurs. At the end of the film, at a new Senate hearing Dr. Malcolm says that now humans will have to learn to live with the dinosaurs.

The film’s rapid pace does not leave much time for character or relationship development, but there is one scene that does touch the heart. It involves a dinosaur, not a human. As the ship pulls away from the lava and fire-ravaged, a lone Brontosaurus runs onto the cock, pursued by smoke and lava. It wails plaintively as it gazes after the retreating boat, the smoke at times obscuring its head. The scene is probably only a couple of minutes, but long enough to rouse our sympathy for the doomed gentle giant.

As before, the filmmakers raise up an example of Tower of Babel builders “making a name for themselves,” assuming what some believe is the role of God, an attempt bound to bring disaster—but also guaranteed to bring in profits at the box office.

In the new Jurassic World our heroes return to the island to save the dinosaurs fro being destroyed by the eruption of its volcano--what could go wrong?
Editor Rating ★★★★★3.5 out of 5
More Details