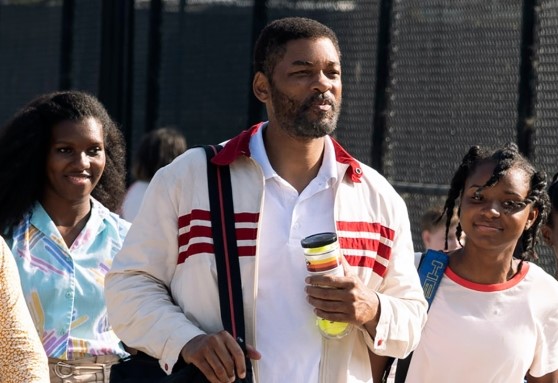 Before destruction one’s heart is haughty,
but humility goes before honor.


When Jesus saw the vast crowds he went up the hill-side and after he had sat down his disciples came to him. Then he began his teaching by saying to them, “How happy are the humble-minded, for the kingdom of Heaven is theirs!


Fathers, don’t over-correct your children or make it difficult for them to obey the commandment. Bring them up with Christian teaching in Christian discipline.

Director Reinaldo Marcus Green’s inspirational sports film is unconventional in that it ends with the climactic game, but not at all in the usual way. (The only film similar that I can think of is Rocky.) Those who expect this to be a bio film about the two great tennis champions, Venus and Serena Williams, might be a bit disappointed, as they are actually supporting characters in the drama. Scriptwriter Zach Baylin focuses upon the father, a force of nature such that nothing could persuade him to deviate from his goal. (Indeed, we are told that before the girls were born, their father had written out a 76-page plan for their lives!) The title is an accurate description of the role that he perceives is his in the life of his family. As we will see, this has many good points, but also some not so good.

The film deals with just a three-year period, beginning in Compton California around 1991 and concludes with Venus’ professional debut in 1994. At the beginning we see Richard Williams (Will Smith) collecting tennis balls and hustling a couple of well-off white men by showing them a business brochure he has prepared touting the tennis prowess of his daughters Venus (Saniyya Sidney) and Serena (Demi Singleton). He is trying to get them to invest in them, but they brush him off.

At a rundown court in Hampton, Richard shows his fierce determination to protect his girls when he calls out a gang leader who has been flirting with Venus. The thug, backed by his homies, beats up Richard for his impertinence, with the five daughters looking on. Back in the car with the upset daughters, Richard regains his composure and dignity, assuring the girls that they would earn the respect of everyone. He voices the same concern for the girls’ welfare when he and his wife Brandi (Aunjanue Ellis) confront a social worker and the police who have been called by a neighbor with a grudge against him (and also concerned that he is making the girls practice in a downpour), charging him with being too strict. He tells them they are strict because they do not want their girls loose in the streets and getting into trouble.

As the story progresses, Richard proves to be a persistent hustler, constantly seeking money and the time of prominent coaches. One coach turns him down, saying, “It’s like asking someone to believe you have the next two Mozarts living in your house.” Richard keeps trying, at last succeeding with famous coach Paul Cohen (Tony Goldwyn) and then, when the girls have been raised to a higher level, tennis impresario/trainer Rick Macci (Jon Bernthal).

Even while signing on with professional coaches, Richard lives up to the film’s title, his commands often over-ruling those of the pros, much to their exasperation. He watches the practices, offering criticism and advice about Venus’s stance. The coaches are displeased, because this counters their advice. He might seem at first like one of those tennis parents whom he despises. But unlike such parents, he is concerned far more with the game and winning—he is concerned for the character of the girls.

At one point when all five daughters are in the back of the family VW bus basking in the glory of a win by Venus, their father orders them to stop talking about tennis, to stop bragging, “to be humble.” He even tries to punish them but is overruled by Brandi.

When the family has moved to Florida and Venus is under the tutelage of Macci, Richard appalls the trainer by refusing permission for Venus to play in the junior tournament matches. The junior circuit has enabled every player before to enter the professional ranks, Macci points out. Richard tells him that he wants his girls to have a normal high school experience, which would be impossible were Venus to join the demanding junior circuit. Richard sees what the pressures of the game has done to one of Macci’s most promising protégés, Jennifer Capriati, the player first introduced to Venus when they first arrived at Macci’s tennis establishment. While away the athlete who broke many “youngest-ever” records is arrested in a Florida hotel room and charged with marijuana possession. This is a fate Richard intends to make sure never overtakes Venus.

Richard sees tennis as a means of escaping the poverty of Compton, but not as the be-all and end-all of life. More than once we hear him tell the girls before a match, “Have fun.” He also knows that there is life after tennis, so he has seen that they acquire a good education—No straight A’s, no tennis has been a family rule.

Now, before you think I believe the film should be called “Saint Richard,” let me point out that there are plenty of scenes in which his quick temper and insistence on his way reveal his faults. Brandi at one point stands up against him, calling him out, revealing she too has a fierce will. When he has to tell Serena that he must concentrate on Venus, Brandi steps in and starts training Serena herself, putting her through the same grueling exercises to strengthen her muscles and quicken her reflexes that Venus is undergoing.

Richard has had a difficult past, which he shares with his daughters. He recalls when his father had been humiliated in front of him by white racists. I think it might have been to whites that Richard had said that he picked tennis to train his girls to master because it was still virtually a white man’s game. Brandi too is well aware of their racist environment. While the family is watching the L.A. white cops kicking and beating Rodney King with their clubs, she says, “At least they got them on tape this time.”

This is a film that ought to serve as a prequel to the equally interesting story that follows. Once launched by their father, how do the two sisters relate to each other? How does Serena process living in the shadow of her sister for so many years? This film does touch on the latter, with Richard almost apologizing to Serena but predicting that she will later be regarded as the greatest tennis player who ever played. I hope to see that film, but the meantime am more than pleased with this one. Will Smith is at his best, supported by an equally talented set of actresses portraying his wife and two oldest daughters.

Although social justice issues are referenced in the film, this is a family film about how two parents shape, protect, and promote their two gifted daughters. (I love the scene in which Rick Macci first watches Venus and Serena play, and exclaims, “I think you just might have the next Michael Jordan,” to which Richard replies, “No, brother, I got the next two Michael Jordans.” The role of religious faith in a family is not emphasized, but neither is it totally neglected. We see family meals beginning with a table grace. Perhaps faith has kept Richard from being the angry, bitter Black man.  Certainly it has infused him with a father’s sense of responsibility for the daughters, as we see in his concern that they stay humble in the midst of victory.

I especially encourage those with daughters to watch and discuss.” Few families have such talented members as Venus and Serena, but all have issues of relationships with parents who seek to influence their lives and ihat their future is a good one.

This review is in the November issue of VP along with a set of 10 questions for reflection and/or discussion. If you have found reviews on this site helpful, please consider purchasing a subscription or individual issue in The Store.

The story of how Richard Williams beat the odds by persisting in training & getting daughters Venus & Serna accepted on the tennis circuit.
Editor Rating ★★★★★5 out of 5
More Details