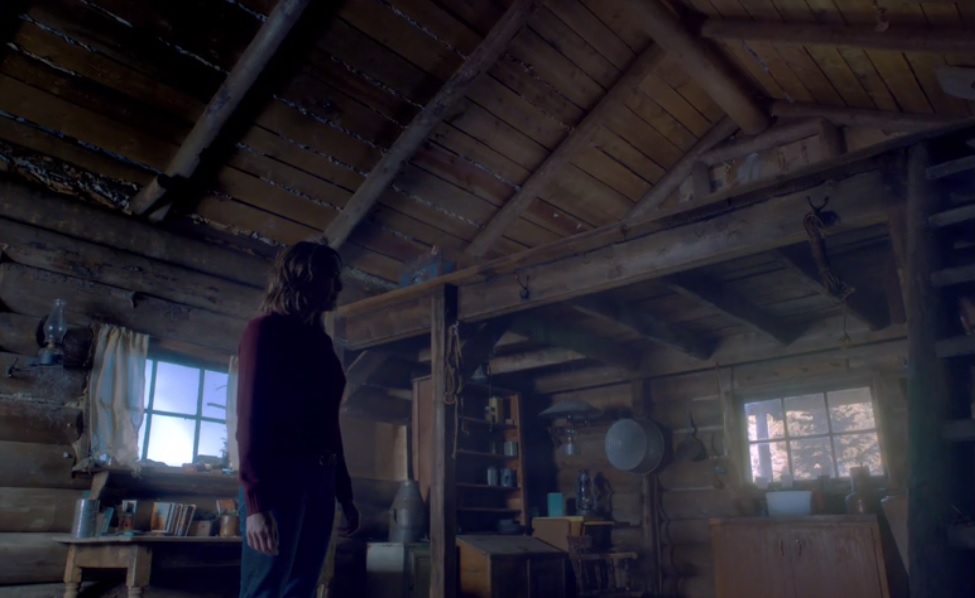 The Lord God said, “It is not good for the man to be alone.


My eye has grown dim from grief, and all my members are like a shadow.

Actress Robin Wright  made a wise decision in choosing screenwriters Jesse Chatham and Erin Dignam to write the script for her directorial debut. Her story of a grieving women seeking escape in the solitary wilderness of the mountains, only to discover the need for community is one of the best films I have seen for reigniting hope during this time of pandemic.

In the cold opening Edee (Robin Wright) sits opposite a therapist who asks her about her feelings. If there is an answer, we do not hear it, because we see her on a city street. There is ominous sounding music on the soundtrack. We are not told why she is so depressed, though clues will soon be offered.

Following the front credits there is an abrupt switch of location, Edee buying hardware and canned goods, then talking with her realtor who tells her that he will lead her to the cabin because it is so isolated. Note carefully what she tosses into a sidewalk wastebasket on her way to her trailer-pulling car. As if this were not enough of a clue to her plan to cut off all human contact, at the cabin she asks the realtor if someone can come and pick up the rental car and trailer. Despite his mild warning about not having any means of transportation out in the wilderness, she persists.

Edee finds living in the wilderness is more difficult than she imagined. She is not adept at chopping wood and getting water from a distant stream in gallon plastic jugs is not an easy task. The night-time howls of coyotes and other sounds of prowlers outside her cabin are spooky, but the daytime marauding of a large bear that walks into her cabin on her second day while she helplessly looks on from the nearby privy is devastating. Besides leaving the cabin’s interior a shamble, he eats much of her stash of food. There are flashbacks in her mind—she and her sister in conflict; a man and a child, the child hugging her

It is so cold and starting and then keeping a fire going in the little potbelly stove is so difficult that she tears pages from one of her precious books in a futile attempt to stay warm. She eats from one of her last cans of food and then takes out the rifle she had seen in a shed but fails to hit a deer. In frustration she says and repeats, “This isn’t working!” Placing her chin over the muzzle of the rife, her finger ready to squeeze the trigger. Flashback to her sister Emma ((Kim Dickens) pleading with her, Don’t hurt yourself! For me!” She relaxes.

A heavy snow storm rages outside. Her body bundled with clothing, Edee lies barely conscious on the floor of the cold cabin. There is a knocking at the door. Two figures enter, Miguel (Demian Bichir) and Alawa Crow (Sarah Dawn Pledge). The latter is a nurse who urges Edee that she needs to be treated for her hyperthermia at a hospital, but Edee refuses. Telling his companion that they need to honor her wish, Miguel volunteers to stay behind when Alawa returns to town the next day.

Over the next few days Miguel nurses Edee back to health, even at first feeding her because her trembling hands cannot hold a spoon steady enough to eat her broth. Edee makes it plain that she does not want any people around, but Miguel, while consenting, suggests that he be allowed to come later to teach her some survival skills, and then “You won’t see me anymore.” She agrees, and there follows scenes of them setting traps, picking berries, planting vegetables in a small fenced plot, fishing, and hunting with their rifles. This time she hits the deer, and he instructs her how to gut and skin the carcass,

They converse, with Miguel bearing most of the talking. The cabin’s only chair, a captain’s chair, he moves to the small porch while Edee sits on the step. He explains how he came to investigate her cabin, and what he does with his life—that out of concern for the nearby tribe’s lack of water, he helps with such matters as digging wells. He reveals that he had a family once but lost his wife and daughter in a car accident eight years earlier.

When asked about her background, Edee resists, and he backs off. She asks why he had helped her, his answer is simple, “Because you crossed my path.” Edee does respond when he asks about her goal. She says that she did have a family, and that “I want to notice more, notice everything about me.”

As Miguel comes and goes he is accompanied by a beautiful dog, who takes an immediate liking to Edee. They talk and sing around a campfire, Edee joining him in a slightly off-key rendition of Tears For Fears’ song “Everybody Wants to Rule the World.”  He talks about his niece and one day gives her a picture the girl has drawn with her crayons of the mountains and Edee’s cabin. The romantically inclined viewer might see the usual budding of a romance here, but the makers of this film have other concerns. One day, after assuring her that now she can survive, Miguel takes his leave of Edee. He says he is not certain when he can return and asks if she will care for his dog while he is gone. She does, and the two settle into an easy companionship as she peruses her family pictures. She had earlier placed pages with large letters spelling out the name of her sister—E­-M-M-A­­—on the wall of her cabin. Now she tacks up her family photos. Days pass into weeks, and no Miguel, until she says, He’s never been gone this long.” This is not the observation of a grieving woman who once wanted no contact with people. It is more of the complaint of a person who misses the comfort and support of companionship.

Taking a leash with her, Edee and the dog start the long hike into town, where she locates the house where Miguel is staying. What she discovers and their moving, haunting conversation I will leave for you to discover. We learn that the man who had brought healing and wilderness competence to her is himself a wounded healer, and that in helping in her healing, he himself had been healed, at least in his soul. It is one of the most moving climactic scenes to be found in any film, including the very last shot in which she uses Miguel’s cellphone to make a long distance call.

Not since Rabbit Hole and The Sweet Hereafter (Feb 98 VP) have I seen grief dealt with so sensitively. In this exquisite film Edee learns the hard lesson, one that comes close to costing her her life, that one cannot run away from grief or conquer it alone, that one needs another person, as the author of Genesis wrote in his second Creation story. She owes not just her physical life to Miguel and his observance about her chimney smoke, but her inner, her spiritual life to this man who like the Samaritan traveler in one of Jesus’ parables crossed the path of a needy person. He would no doubt have offered a very different answer to God’s question to Cain about his brother Abel. And Miguel discovers that in helping others he himself finds healing for guilt and pain. Edie’s telling him “You give, give, give…” reminds me of the line from the prayer attributed to Francis of Assisi, “For it is in giving that we receive.”

This is certainly one of the films that will be on this year’s Top Ten Films list. And let me say before ending that if you feel closed in by quarantines, the mountain vistas and the yellow aspens captured  by cinematographer Bobby Bukowski will soothe your soul. The scenery is as beautiful as the story, tunefully enhanced by the elegiac music of Ben Solle and the Time For Three. Of course, all this is capped by Robin Wright’s captivating portrayal of a woman whose spirit is crippled by grief and then slowly responded to tender care and instruction that restores her sense of self-sufficiency. Her superb performance is matched by Demian Bichir who is on the road to his own healing by reaching out to others. The chemistry between the two leads could easily lead us to accept that the two could become soul mates, but we can be glad that the writers took a path less trodden. It is hard to believe that the is Ms. Wright’s maiden directorial stint, and then we should remember that she directed 10 episodes of House of Cards, so she is not a novice by any means. Let us hope she will find other projects as worthy as this one!

Due out on February 12, it is, as indicated at the beginning of this review, just the film that will raise your hopes during this difficult time!

A grieving woman buys a wilderness cabin, trying to break all contact with people, even her sister, but discovers through a compassionate hunter that healing is a communal affair.
Editor Rating ★★★★★5 out of 5
More Details