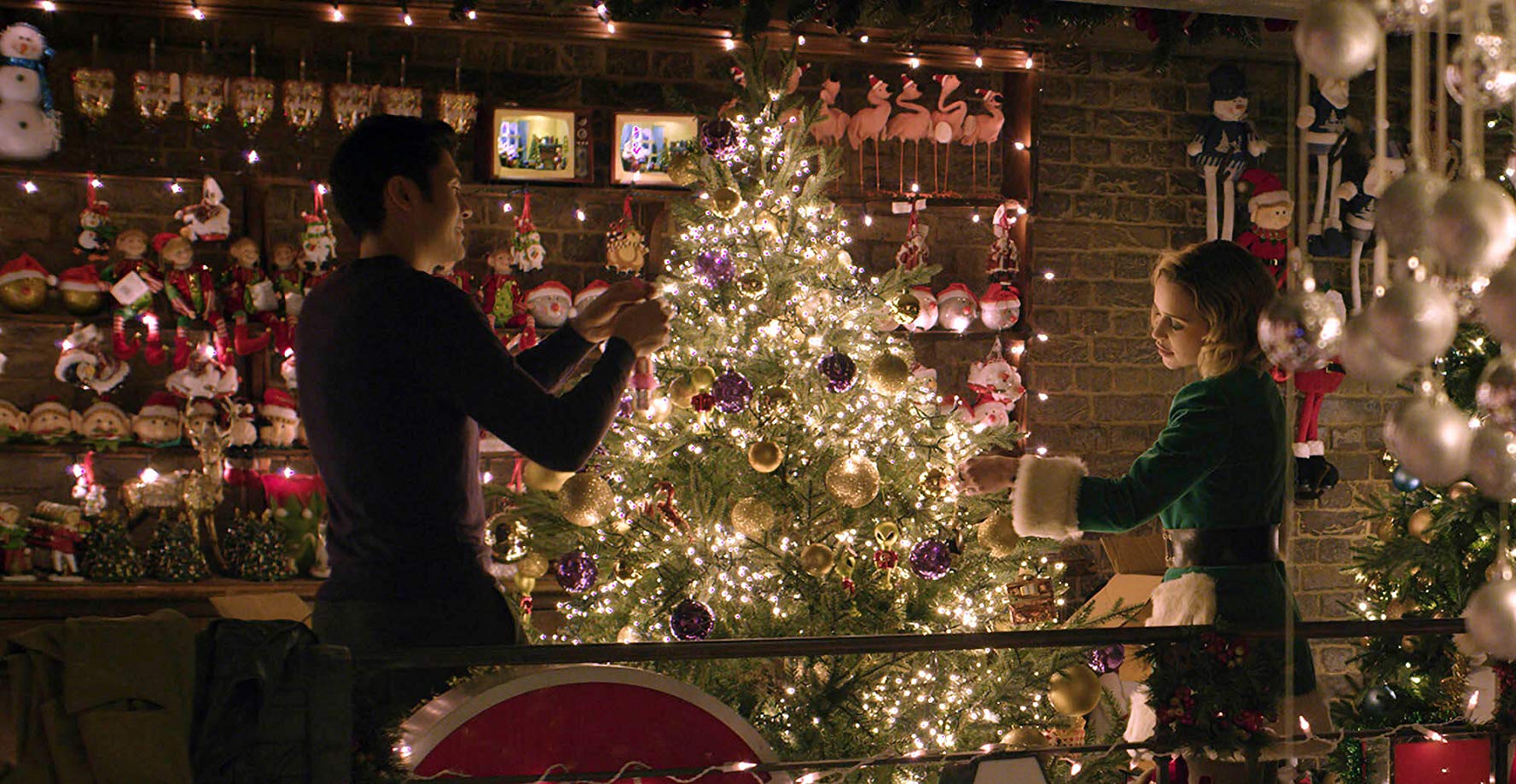 Christmas is probably the blame for the infestation of more mediocre (and many downright awful) movies than any other season. Understandable, in that the season of merriment and goodwill induces the kind of sentimental feelings that Hollywood loves to promote. Director Paul Feig’s Last Christmas rises above the mediocre, but not much, and like most such films, his is related to Christmas mainly because the story unfolds during the season and is set in a year-round Christmas shop. No angels or shepherds, except what are sold in that Christmas shop.

Co-written by Emma Thompson and Bryony Kimmings, the film states in the opening credits that it is “inspired by” the opening lines of a Wham! song, “Last Christmas/I gave you my heart/But the very next day you gave it away.” We eventually learn that the line is taken literally in that the heroine, Kate (Emilia Clarke), who clerks at the Covent Garden shop “Yuletide Wonderful,” bears a large scar on her chest from a heart transplant operation one year earlier. She is the daughter of immigrants from the former Yugoslavia, Petra (Emma Thompson) and Ivan (Boris Isakovic), but is not on good terms with them, or her sister Marta (Lydia Leonard), so she sleeps around on the couches or spare beds of friends.

Kate’s “hero’s journey” is similar to that of Scrooge’s. Actually, in regard to character, she is worse than the old humbugger. She drinks too much and indulges in one-night sexual trysts with about any man she meets in a pub. She even snitches on Marta to her parents that her sister is a lesbian living with Alba (Jade Anouka). Dressed in a Santa’s helper costume, Kate is a lousy employee at Yuletide Wonderful, but owner Santa (Michelle Yeoh) sees her potential, and so gives her second chances. It is right outside her workplace that she meets the handsome Tom Webster (Henry Golding) in a not so cute way. His motto is “Look Up,” and when she does so, a pigeon unloads onto her upturned face.

She keeps seeing him around the city, eventually entering into a relationship with him that never results in sex, as with her previous encounters with males. He remains largely a mystery in that he does not speak to anyone but her, and he comes and goes without any explanation of where or why he leaves her. Tom’s influence on her is positive. She goes to the large homeless shelter at which he volunteers, and soon is pressed into service herself. She has been trying to break into show business without success, but when she stands outside the shelter and sings Christmas songs, she collects a steadily increasing amount of money for the facility. It is not spoiling things to report that there is a family reconciliation, and for lovers of romance, even a subplot in which Kate connects her boss with a customer who is obviously attracted to her. There is a major plot development that showed that I would not make a good detective. Unlike several critics, the revelation about Tom Webster came as a surprise to me.

To its credit, the film recognizes that it is a cruel world beyond the lovers’ bubble. It might be Christmas, but the spirit of Scrooge still infects society. The film raises the immigrant issue, Britain’s Brexit similar in some ways to the anti-immigrant policy of our own government. The TV news report shows a Brexit demonstration, and there is a heart-warming scene on a bus when, after a bigot disses a Yugoslavian couple, Kate addresses them in their common language, saying that they are welcome in England.

The inclusion of a serious social issue made me enjoy the film more than the critics, so if you go to the Metacritics section of IMDb, don’t let their relatively low scores discourage you from seeing the film. It may be, as the first critic says,” escapist comfort-food cinema,” and certainly not in the same class as It’s a Wonderful Life or A Christmas Carol but is still better than the majority of this year’s romantic comedies. The Kate whom we leave at the end of the film has traveled a long spiritual journey, arriving at the point at which the apostle Paul hoped his friends in Philippi were heading. You will leave the theater feeling a little better about the state of the world.

During Christmas time a selfish London woman with a transplanted heart falls in love with a mysterious man and is changed for the better.
Editor Rating ★★★★★4 out of 5
More Details