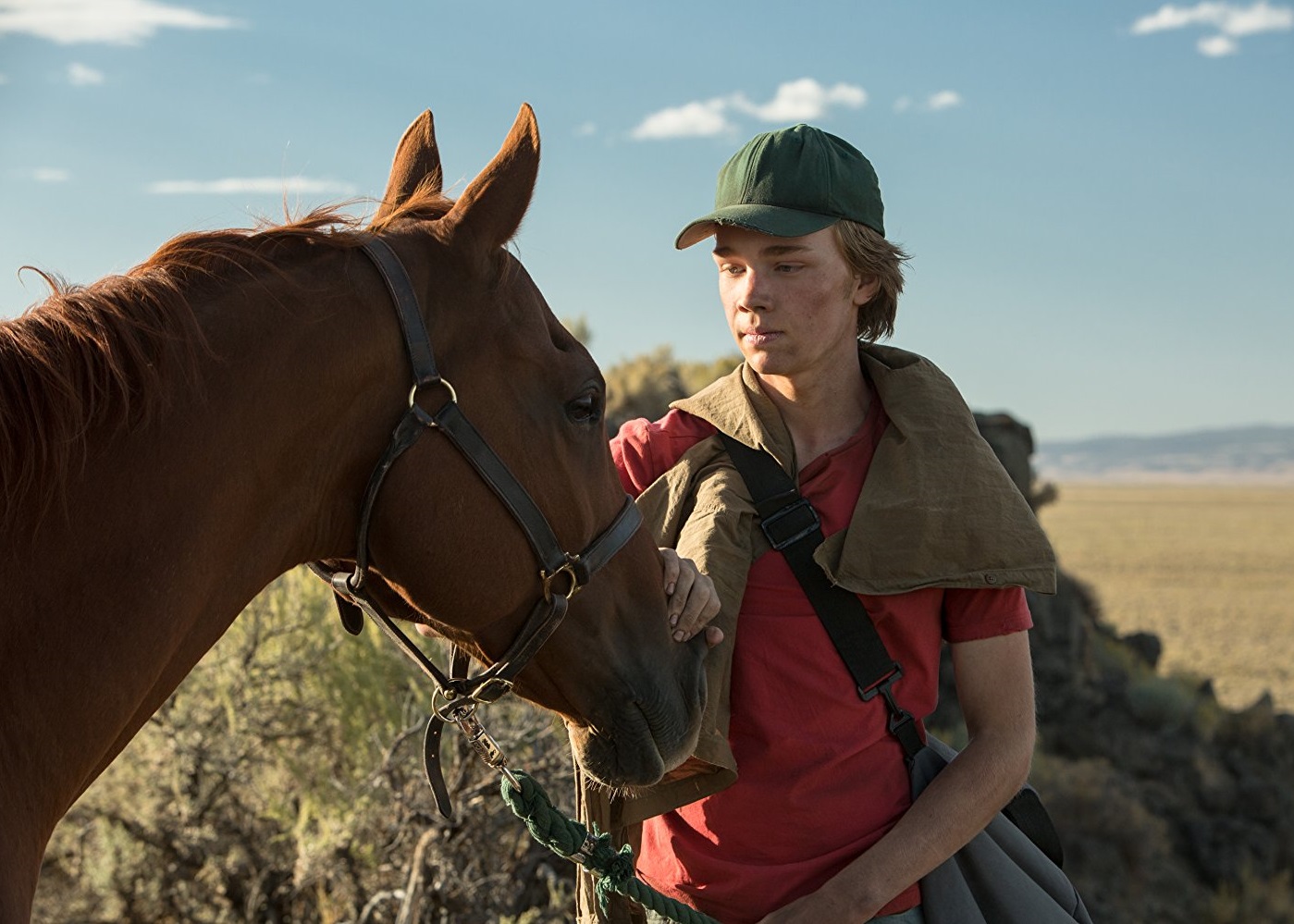 A boy bonds with a winless race horse & when his father dies sets off across country with the horse to find his aunt & prevent the horse from being put down.

For the Lord your God is God of gods and Lord of lords, the great God, mighty and awesome, who is not partial and takes no bribe, who executes justice for the orphan and the widow, and who loves the strangers, providing them food and clothing.

Director/writer Andrew Haigh’s film, adapted from Willy Vlautin’s novel, becomes at its midpoint a road trip tale—only much of the trip is on foot, not by car, or even on horseback, even though it is the horse that is the cause for the trip. Although the horse in question gives its name to the film, this is really about the long journey that a lonely but determined teenage boy makes in his search for happiness, the emotional/spiritual journey being as long as the boy’s physical one, from Portland, Oregon to Laramie, Wyoming.

The film is divided into two parts, the first introducing us to Charley (Charley Plummer) and supporting characters as the boy meets and bonds with a five-year-old horse, and the second which consists of Charley and Lean on Pete’s taking to the road to search for his long-lost Aunt Margy (Alison Elliott, who played Percy Talbott in The Spitfire Grill).

Charley and his single-parent father, Ray (Travis Fimmel), have moved from Spokane, Washington, to a small house in Portland. Ray has a good relationship with his dad, but the latter is no more grown up than the son, drifting from job to job and chasing virtually every waitress that catches his eye. One morning Ray’s current conquest cooks the two an egg breakfast before Charley starts out on his daily jog, and the boy asks if this could last. However, she is married, and so this fling will result in terrible consequences for Ray and his son.

As he jogs along, Charley comes upon Del (Steve Buscemi), needing help with a flat tire on his trailer-pulling pickup truck. After paying the boy $10 to fix it, he offers the boy $25 a day to help him at the Portland Meadows race track to which he had been heading with his horse. Pete likes both the horse and the work, performing so well that the impressed Del pays him far more than the agreed upon price. Over the next few days Charley bonds with Pete and befriends female Jockey Bonnie (Chloe Sevigny). Del occasionally wins with his second horse, but not with Pete, so he talks about sending Pete “to Mexico.” Charlie is disturbed by this euphemism, but Bonnie warns him against getting too attached to the horse: “You can’t think of them as pets. They lose too much, they get fired.” During a trip to a circuit of small race tracks Charlie grows all the more closer to the horse, especially after the tragic event that orphans him.

Lean on Pete continues to lose races (often two or three-horse affairs), so when Del decides to “send the horse to Mexico,” Charley rashly takes off with the truck in the direction of Wyoming. Throughout the film we see him trying to find via telephone operators the whereabouts of his aunt. Along the way the penniless boy encounters various people—some helpful and sympathetic, another friendly, until the boy acquires some money. Charley’s impulsive flight with lean on Pete without any real thought as to how the two would survive does not turn out as he had hoped. However, despite the dark events, the film ends on a hopeful note that the young man seeking stability in his life—he yearns to be able to play on a high school football team again—has found it. There are few better scenes of welcoming compassion than the tender one that concludes this film!

Andrew Haigh’s tale is no My Friend Flicka. It is completely unsentimental, Lean on Pete always depicted as just a horse, rather than the super intelligent animal depicted in so many horse and young owner films of the past, able to contribute to the resolution of the plot. This makes this character study even more believable, and the ending in Laramie leaves us with the belief that Charley is a survivor who will grow into a fine young man despite his past—or probably, because of it. The film maker chose the perfect song for the soundtrack, Bonnie Prince’s version of the R. Kelly hit “The World’s Greatest,” with the following words that, in describing Charley, are by no means an empty boast:

Charley is the kind of outsider very much like those championed by the Lord God throughout the Hebrew and Christian Scriptures.

You can hear this anthem on You Tube. https://video.search.yahoo.com/yhs/search?fr=yhs-pty-pty_packages&hsimp=yhs-pty_packages&hspart=pty&p=You+Tube+R.+Kelly+hit+%22The+World%27s+Greatest%22#id=3&vid=b55469095e45f0f42dcd8f2bb18cfd16&action=click

A boy bonds with a winless race horse & when his father dies sets off across country with the horse to find his aunt & prevent the horse from being put down.