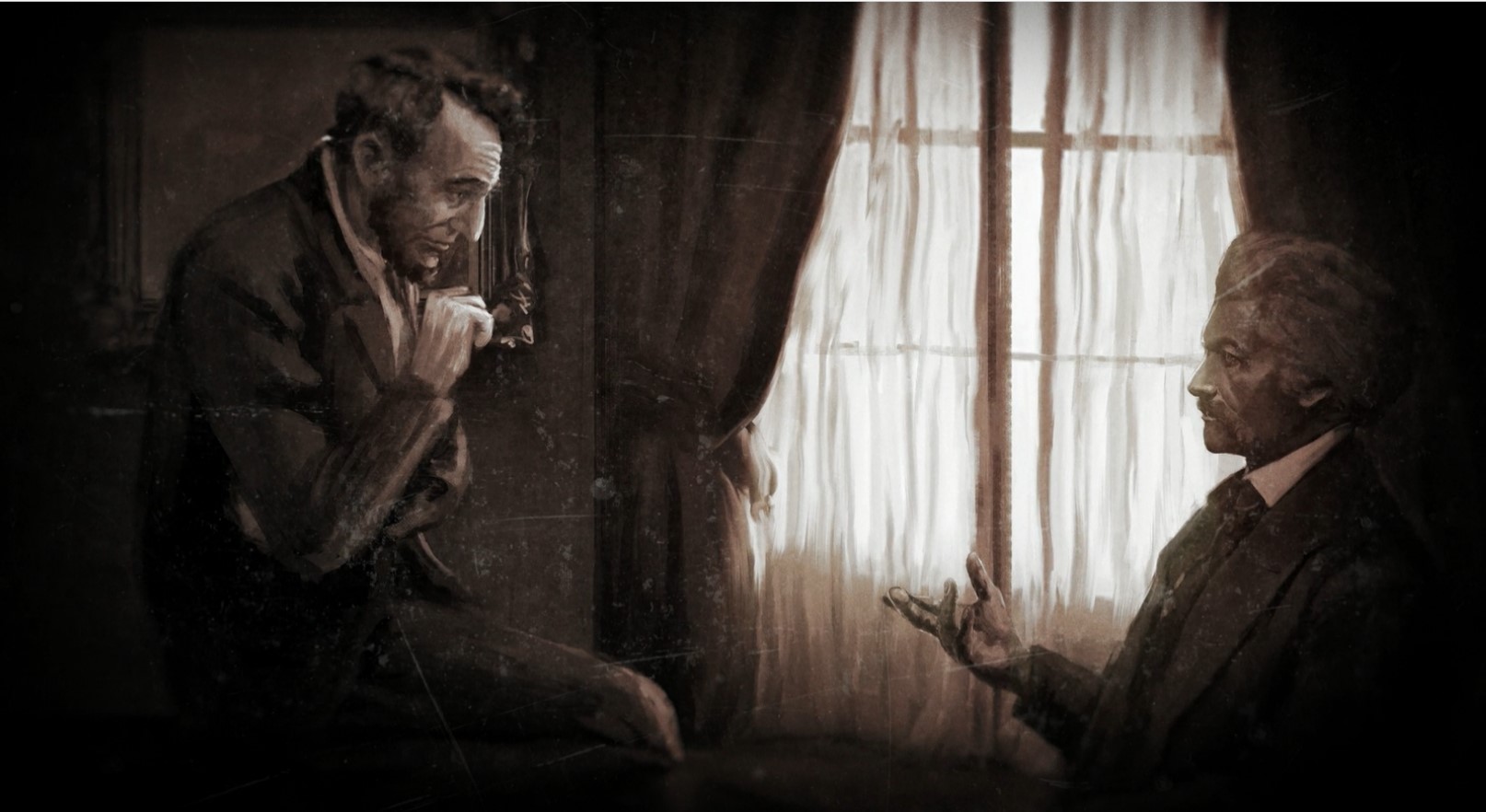 This superb 4-part miniseries will dispel a number of misconceptions about the US president, often called “The Great Emancipator.” It is based on the book by David S. Reynolds ABE: Lincoln in His Times. Through archive photographs, old prints and drawings, and simple animation for numerous dramatic stories, the film brings to life an exciting era that still impacts our own The film might have been named Lincoln’s Dilemma and Douglas’s Push-Back because the great Black abolitionist Frederick Douglas had a tremendous influence on the President. One of the historians declares that Douglas was very much Lincoln’s equal.

The film is narrated by Jeffrey Wright, with Bill Camp reading the words of Abraham Lincoln, and Leslie Odom, Jr. the voice of Frederick Douglass. A number of historians and activists add helpful details and comments. The only one of these that I recognized was Bryan Stevenson, founder of the Equal Justice Initiative (and whose story dramatized in the movie Just Mercy we reviewed in these pages), but all were very knowledgeable and able to express themselves in an attention-keeping manner.

The 4 parts of the series are entitled “The Anti-slavery Candidate;” “So You See the Man Moves;” A New Birth of Freedom;” and “A Sacred Effort.”

Beginning with his leaving his home in Springfield and forced to sneak in Washington in disguise because of the plot against his life that his Pinkerton protectors had discovered, Lincoln had to deal with the messy details of politics as well as ethics and morals. As one historian puts it, Lincoln did not start his presidency to be “The Great Emancipator…Lincoln’s No. 1 agenda is unification. It is not the abolition of slavery.” This can clearly be seen in his public statements at the Lincoln Douglas Debates years before he became President.

It was in his interaction with others, and especially Frederick Douglas that Lincoln broadened his views, and indeed, in one respect, made a U-turn. He believed that whites and Blacks could not mix socially, so he espoused the popular cause of Colonization, of sending freed Blacks to Liberia—until Douglas convinced him it was a bad idea. This is but one of several instances in which the great Abolitionist helped Lincoln grow to be a great president. Another was that Lincoln agreed with many whites that Blacks ought not to be accepted into the Army. It’s hard to believe that Blacks were at first rejected, but the majority of whites in the North shared the view of the Confederates that Blacks were inferior, lazy and cowardly. Lincoln also opposed the practice of declaring slaves who fled their masters to be free, but soon changed his mind on this for numerous reasons. But one of his concerns, someone points out, is political—he does not want to do anything that might cause the three slave states that remained loyal to the Union to drop out.

Each of the four parts contains fascinating stories of Blacks, slave catchers, and the war—these are usually animated to flesh out the narration. There is the story of northern Blacks successfully defeating a party of slave catchers who had tracked a runaway to their home. And what a delight is the tale of how southern slave Robert Small managed to steal a steam boat and navigate with his cargo of fellow escapees right by the Confederate cannons that could have blasted their dreams of freedom to smithereens! I’d love to see Will Smith in a movie about this man whose story (deliberately) became lost when the Southerners rewrote history based on the myth of The Lost Cause. (The film doesn’t go into the details of his later service in the war but it too was exciting.)

I gained new insight into the Gettysburg Address from which Part 3 takes its name, “A New Birth of Freedom.” (The entire Address is read, and there is a nice story about a boy waiting beneath the platform to hear the speakers.)

There is far more information about the role of the Blacks in the fighting, once they were allowed to enlist, than I have seen in other documentaries. Almost 180,000 fought for their freedom, which is what Douglas wanted. He did not believe that freedom should be handed to his people. Those brave men fought under the threat of execution if captured. The story of one such massacre in Tennessee will make you shudder at such inhumanity. There are so many good stories and details of the politics of the time in this film that I look forward to watching it again.

I will close with the wonderful anecdote from which Part 4 gained its name. Lincoln knew that Douglas was in the audience when he delivered his 2nd Inaugural Address (much attention is given to the text of that great address). At the White House Party that night word reached the President that Douglas had been barred from entering because of his race. The President countermanded the order, and when the two had a moment to chat, he asked his guest what he thought of the speech. Douglas replied that it was “a sacred effort.”

In 1860 Douglas, like most Abolitionists, had thought little of Lincoln and his mild anti-slavery views, just as Lincoln was opposed to what he thought were the radical views of Abolitionists. Both changed greatly during the interval between Lincoln’s first electoral victory and his second one. Indeed, this is one of the takeaways from this series, that Lincoln was a complex man living in complex times. He was more open to change when confronted with facts than any other person of his time.

The above barely begins to do justice to the vivid stories and the multitude of facts about this important period– and from its description of the aftermath of Lincoln’s murder, we see how relevant those times are to our own era of divisive conflict. This is a must-see series when it debuts Feb. 18 on Apple TV+!