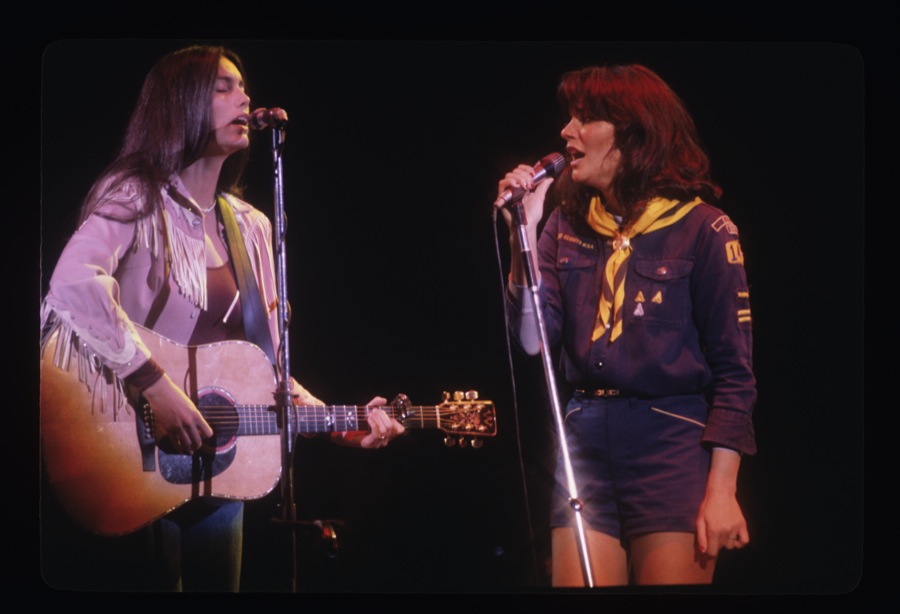 Linda Ronstadt, right, and Emmylou Harris, as seen in the documentary "Linda Ronstadt: The Sound of My Voice."

Let me sing for my beloved

my love-song concerning his vineyard:
My beloved had a vineyard
on a very fertile hill.

Those who have enjoyed Ken Burns exquisite PBS series Country Music will love Rob Epstein and Jeffrey Friedman’s rousing tribute to a great singer. Along with clips from great songs, Burns included segments on the personal and professional lives of the major singers, fascinating glimpses into the music-makers’ backgrounds, but understandably limited to just a few minutes. The eclectic Linda Ronstadt was included, and now, instead of just a few minutes, we have a little over an hour and a half of song clips and biographical details about her!

We see that she grew up in Tucson amidst a Mexican American family whose home was suffused with music. Her father had a fine baritone voice—we are treated to a clip of his singing late in the film—and she sang with her older sister and brother for a while. They went into other professions, leaving Linda as the one “born to sing.”

Through a rich montage of song clips, interviews of such stars as Dolly Parton, Emmylou Harris, Bonnie Raitt, Ry Cooder, Jackson Browne, Don Henley, record company presidents David Geffen and Joe Smith, and others (including Linda herself), Ronstadt’s personal life and professional life are explored, from her days in Hollywood with the Stone Poneys through her retirement due to Parkinson disease. Many of them mention her nagging self-doubts and her constant striving for perfection, she herself saying, “I’m never really satisfied with what I do.”

This refusal to be satisfied with what she was doing has benefitted us all, leading her to sing country, rock, pop, and even Gilbert and Sullivan in New York, virtually always against the advice of the naysayers who feared she would ruin her popularity if she failed. In the clip from the production of G&S’s Pirates of Penzance we see that this was no stretch for her, her bell canto voice soaring over stage and audience. (Kevin Kline played the pirate king in this production.)

She even dares to enter Frank Sinatra territory, singing old standards of love and betrayal. Can you imagine what the song from Isaiah, in which God is the lover betrayed by his lover Israel, might sound like in a tune sung by Ronstadt?

Near the end we learn that she fulfilled her long-standing intention of recording an album of the traditional Mexican folk songs she had learned as a child in Tucson. Again, her voice soars as she belts out the Spanish lyrics. This makes the final scene all the more poignant when, seated between her musician nephew and cousin, her voice now ravaged by the disease, she quietly joins them in singing one of those songs from her Mexican heritage. If you were not a Linda Ronstadt fan at the beginning of this film, the dozens of emotion-inducing songs will probably win you over by its conclusion.

Linda Ronstadt's glorious career, from days of her musical family in Tucson through the many song genres she mastered, until Parkinson's disease forced her to retire.
Editor Rating ★★★★★5 out of 5