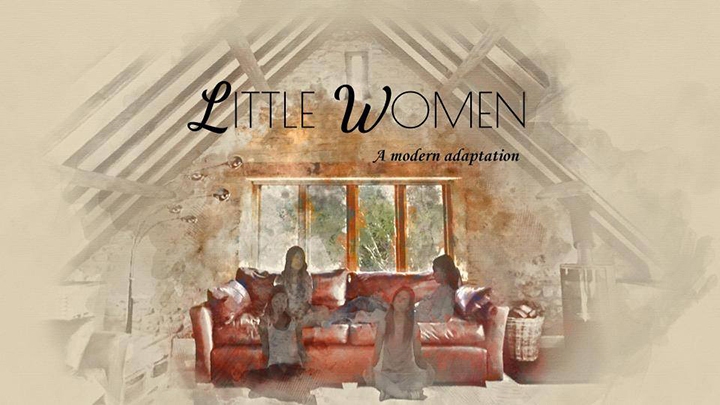 Above all, maintain constant love for one another, for love covers a multitude of sins.  Be hospitable to one another without complaining. Like good stewards of the manifold grace of God, serve one another with whatever gift each of you has received.

The new Little Women is more of an “inspired by” version of Louisa May Alcott’s classic than the many previous film adaptations. Directed by Clare Niederpruem, who also is co-scriptwriter with Kristi Shimek, the film is set in the 21st century and unfolds over a much longer period—at least 16 years. Papa March (Bart Johnson) is a soldier far away in the Middle East, communicating, not through letters, but by Skype. Lea Thompson’s Marmee is not as central, or forceful, as Susan Sarandon’s mother in the 1995 version. Jo (Sarah Davenport) is the dominant character now, although the other four sisters, sometimes at war with one another, each have their moments to shine.

Their story is told in a series of flashbacks, going back to their  Boston childhood. Jo now lives in New York City where she feels old age is pressing in on her because she has not become the successful writer she has long dreamt she would become. A panel of Columbia University professors turns her down when she reads a portion of the fantasy that I presume she has handed in as her thesis. She persuades one of them, Freddy (Ian Bohen), to read her entire work, thus beginning a series of consultations with him. He is harsh in his criticism, but also supportive, assuring her that she is indeed a writer. At one point he tells her after reading one more of her derivative stories, “I liked it a lot, actually. But then, I’ve always been a fan of A Wrinkle in Time.” Ouch!

What we see in the earlier flashbacks is Jo’s infatuation with fairy tales and fantasy which she and her sisters act out in their imaginatively decorated attic. In one flashback each girl has a wooden castle, presumably made for them by their father, into which they store their dreams for the future. Orchestrated by Jo, the four March sisters enthusiastically act out her stories, and in one sequence, with soldier helmets adorning their heads, act like a squad carrying out the mock orders given by their father in ta recent Skype exchange. (This called to mind a similar scene in The Great Santini in which Robert Duvall as a Marine airplane squadron leader treats his four children as if they were members of his crew. On their first day at a new home he lines them up, addresses them as “sports fans,” and barks orders to them as to how they will behave at their new school in a way that brooks no interference – from them or his wife Lillian.)

Many of the novel’s incidents–the sharing of food with less fortunate on Christmas Day; the suiter Laurie (Lucas Grabeel); the bustling and occasionally disapproving Aunt March (Barta Heiner);  Amy’s vengeful burning of Jo’s notebook; and the lonely Mr. Lawrence (Michael Flynn)’s gift of his piano—are included but so truncated that they make less of an impression here. Some will be satisfied that at least Jo’s slow blossoming romance with her mentor Freddy receives full treatment so that it dominates the film.

Although not as winsome as the earlier, period-set films, Louisa May Alcott’s great story of the Marsh girls’ love and coming of age still inspires, regardless of its time frame. The distributor must have had similar qualms—instead of booking it into cinemaplexes, they sent it to art house theaters. Thus, fans of the book will have to search for this film, one that is better than most critics are willing to admit. One could have fun rounding up DVDs of the older versions—check your local library—and comparing them with the new release.

This adaptation of the classic novel is set in the 21st century, the focus mainly on Jo's struggle to become a writer & her slow realization of that her mentor loves her.
Editor Rating ★★★★★4 out of 5
More Details