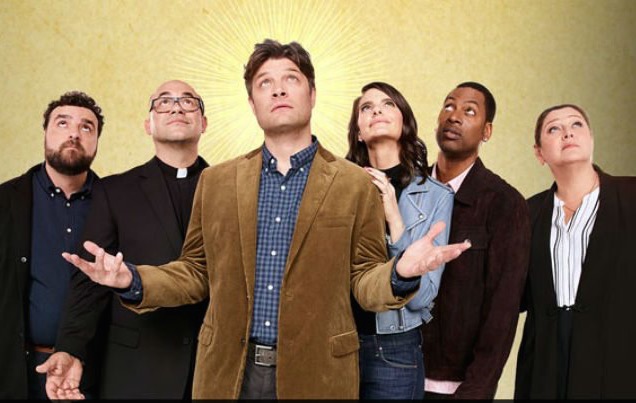 Indeed, the word of God is living and active, sharper than any two-edged sword,

piercing until it divides soul from spirit, joints from marrow;

it is able to judge the thoughts and intentions of the heart. 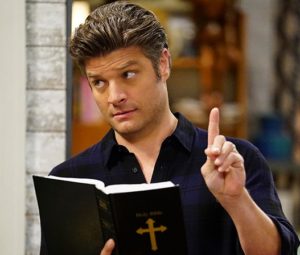 The fictionalized TV series is based on Esquire Magazine writer A.J. Jacobs’ bestselling book about the impact of the Bible, The Year of Living Biblically. The series follows the misadventures of Chip Curry (Jay R. Ferguson), a critic at a New York City publication. He is married to Leslie, a pregnant medical technician.

Following a series of setbacks that includes the death of his best friend, Chip decides to set his life straight. Part of this decision is occasioned by the dead friend’s mother after the funeral telling Chip and his wife Leslie (Lindsey Kraft) that her wayward son is not in “a better place,” that because he stopped going to church, “his area code is 666”—and, when Chip says he too no longer attends, she says she is sure he (Chip) will see him again. This launches Chip into a funk, from which he is extracted when his wife returns from the medical clinic where she works to tell him she needs him now more than ever—she is pregnant. He promises her he will improve so he will become a worthy father. At a book store he adds to his tall stack of self-improvement books a Bible that he has pulled from the shelves. He almost puts it back but decides to buy it anyway—a decision that will change his life.

The next day Leslie is somewhat surprised by his announcement that after reading in the Bible the previous night, he has decided to live its commandments literally for the 9 months of her pregnancy. The daughter of a flaming atheistic mother, she raises some mild objections, but agrees, as long as it does not spoil her fun. He assures her that it will improve their marriage.

The following questions can be used in a group discussion, or a clergyman or teacher might find them as helpful in identifying incidents or issues for use in a sermon or lesson:

Note: My intention was to post similar guides for all 12 of the episodes for groups to discuss them and/or for leaders to use as illustrative material, but CBS would not grant access to the programs.

When a husband's best friend dies &his wife becomes pregnant, a writer decides to change his life by living by the Bible, with drastic results.
Editor Rating ★★★★★4.5 out of 5
More Details