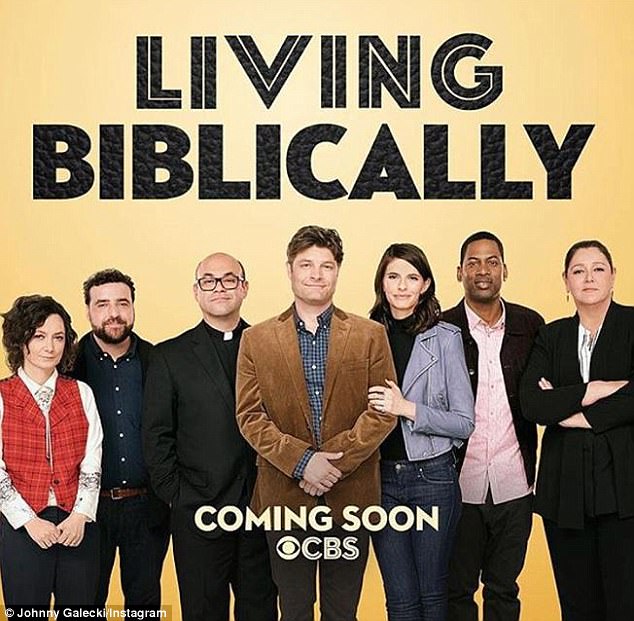 All scripture is inspired by God and is useful for teaching, for reproof, for correction, and for training in righteousness 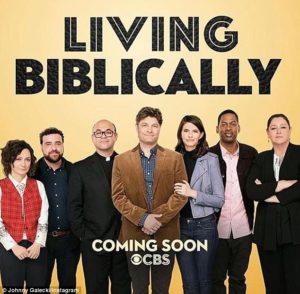 The new CBS series Living Biblically, premiering Monday, Feb. 26 (9:30-10:00PM, ET/PT), shows great promise, judging by the three episodes I have seen. Combining humorous rifts with the serious theme of taking the ancient Bible seriously in the 21st Century is a bold move, but so was the non-fiction book which inspired series creator Patrick Walsh–A.J. Jacobs’ New York Times best seller The Year of Living Biblically.

The fictionalized TV series follows the misadventures of Chip Curry (Jay R. Ferguson), a critic at a New York newspaper married to a pregnant medical technician. Book author A.J. Jacobs is a writer at Esquire Magazine, and also married to a woman who becomes pregnant during the writing of his book. Beyond these similarities (and no doubt some amusing incidents from the book), the two story arcs follow their own patterns.

In the pilot episode, following a series of setbacks that includes the death of his best friend, Chip decides to set his life straight. Part of this decision is occasioned by the dead friend’s mother after the funeral telling Chip and his wife Leslie (Lindsey Kraft) that her wayward son is not in “a better place,” that because he stopped going to church, “his area code is 666”—and, when Chip says he too no longer attends, she says she is sure he (Chip) will see him again. This launches Chip into a funk, from which he is extracted when his wife returns from the medical clinic where she works to tell him she needs him now more than ever—she is pregnant. He promises her he will improve so as to become a worthy father. At a book store he adds to his tall stack of self-improvement books a Bible that he has pulled from the shelves. He almost puts it back but decides to buy it anyway—a decision that will change his life.

The next day Leslie is somewhat surprised by his announcement that after reading in the Bible the previous night, he has decided to live it literally for the 9 months of her pregnancy. The daughter of a flaming atheistic mother, she raises some mild objections, but agrees, as long as it does not spoil her fun. He assures her that it will improve their marriage.

In the confessional booth of the local Roman Catholic church we know right away that Chip has sought out the right priest for counsel. Father Gene (Ian Gomez) answers Chip’s knock and query, “Hey, man, are you open?” with, “We’re always open, like a 7 to 11.” After confessing a few minor sins, Chip reveals that he wants to live out the Bible literally. Fr. Gene breaks into a long belly laugh. He tells Chip that it is not possible, such acts as stoning would land him in trouble today—and he has already broken a commandment by wearing clothing made of two different fabrics. Using the letters comprising the word “Bible,” the priest calls the holy book “Basic Instructions Before Leaving Earth.” Chip is not discouraged.

The next day Chip shows up in his office dressed all in white cotton fabric to the astonishment of his friend Vince (Tony Rock). Accused earlier by co-worker Cheryl of always eating the last donut but never bringing any, he holds forth two boxes of the goodies. He even refuses to join his friend in running down the obnoxious co-worker Gary, whom they both despise, because this would violate Biblical commandments. (I love it that in A.J. Jacob’s delightful book, which as of now I am half through, counts down the number of days he is in his program, each day beginning with one of the 600+ Biblical commandments.)

Later, Chip talks with the priest at the bar of the restaurant where he is to meet Leslie and is introduced to the priests bearded friend who reveals that he is not just Gil, but Rabbi Gil (David Krumholtz), who turns out to be every bit as wisecracking as Fr. Gene. When Leslie shows up and is introduced to the clergymen, she dubs them “The God Squad.” Later, as husband and wife finish their dinner, Chip shoves over to her side a big piece of chocolate cake, saying he is resisting the sin of gluttony. Then Gary, Chip’s insufferable co-worker, walks into the dining room with a younger woman in a dress two sizes too small. Leslie, a good friend of Gary’s wife, is so incensed that she gets up and stalks over to their table, Chip anxiously following close behind her. He becomes upset by Gary’s awkward attempt to claim the mistress is his assistant, so he picks up a stone from the nearby potted plant and enforces Deuteronomy 20:10 in the funniest manner every filmed. The next day at the office, where his attempt to live Biblically has been the talk of everyone, his rash act of the night before bears unexpected fruit—with both Gary and their hard as nails boss Ms. Meadows (Camryn Manheim), sort of a female Lou Grant reacting to Chip in unexpected ways.

Some of the acting of minor characters is a bit broad at times, though the principals, Jay R. Ferguson and Lindsey Kraft, work well together, and if the series catches on, should become another of our favorite TV couples. I was at  first bothered by the laugh track, until I learned from series creator Patrick Wash (my interview with him will soon be up on my blog) that it was not phony; the episodes were all filmed before live audiences. In the two following episodes that I watched, “Episode 4, False Idols” and “Episode 7, Let Us Pray,” the issues of our obsessions that constitute idols; prayer and miracles; and science and religion are dealt with in a humorous but meaningful way.

In “False Idols”, after Chip accuses Leslie of idolizing the singer Beyoncé’, the clergy point out that Chip’s preoccupation with his cell phone is his idol, which he at first tries to deny. When he looks around the bar/restaurant, he quickly notices that almost every patron is involved with their mobile phones.

In “Let Us Pray” the issue of praying and miracles are lightly treated when Chip and others are trapped in a stalled elevator and they are rescued after he prays—coincidence or miracle? Handled even better is the science vs. religion debate when Leslie’s flaming atheist mother visits them and accuses Chip of giving up on science. Chip retorts that he still believes in a 4 billion-year-old Earth, and not a 6000 year or so old one, that science and faith are not enemies. The two go back and forth, neither “winning,” but coming away with a mutual respect for the other’s position, instead of their negative prejudgment held before.

I found myself astonished that so much good material was packed into each, seemingly brief, 22-minute episode. Creator Patrick Wash told me that a later episode will hit close to Chip’s home, the title revealing the subject, “Submit to Thy Husband.” Other topics will include stealing, honoring our father, loyalty, giving and receiving, and a series closer with the intriguing title of “David and Goliath.” I can hardly wait to see these. Along with amusement and laughter, the series offers religious leaders a great opportunity to induce their people to watch by promising to comment upon them in their sermons or classes. This is a series worth supporting, so watch my blog in February for updates and comments.

This review with a set of discussion questions will be in the February issue of Visual Parables. If you find this review helpful, please help us out by ordering an issue or a year’s subscription at The Store section of this site.

When a married man decides to improve his life by living his life according to the commands of the Bible, his life changes radically.
More Details