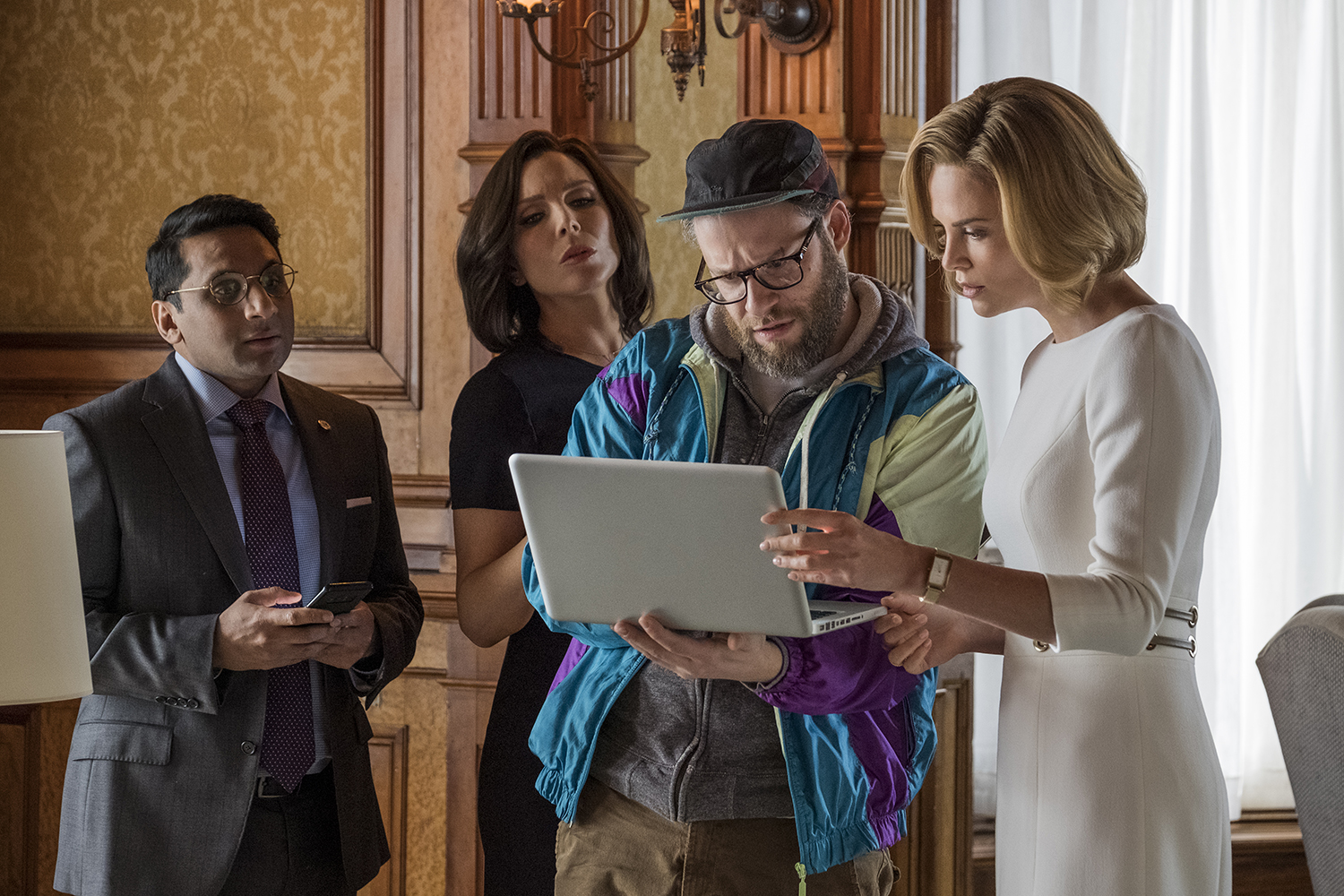 he Lord judges the peoples;    judge me, O Lord, according to my righteousness    and according to the integrity that is in me.

Director  Jonathan Levine’s light-hearted comedy is a step or two above most films lamely attempting to make us laugh. It might seem a bit difficult to accept Charlize Theron’s Charlotte Field as a Secretary of State or serious contender for the U.S. Presidency, but reality today is so bizarre that this proves to be no major obstacle. That the gorgeous Charlotte would be attracted to a slovenly schlep like Seth Rogen’s Fred Flarsky seems equally far-fetched, but the chemistry the two exhibit together quickly dispels this too.

Flarsky is an investigative journalist whose writings land him in trouble at times, as do his impulses. The latter we see when he quits his newspaper job because arch-conservative media mogul Parker Wembley (Andy Serkis) has bought the paper. The other is when he spies Wembley at a charity party and rushes over and rails at him because of his Fox-like news channel spreading its vicious propaganda. Fred had just met Charlotte and the two had remembered that they had been high school classmates. Indeed, being a few years older, she had babysat for him! That brief encounter had ended in disaster when Fred turns, trips, and speeds down the stairs like a bobsledder minus his sled.

Despite Fred’s public gaffes, Charlotte, who is getting ready to run for the presidency, decides to hire him as a speech writer because she has been told she is perceived as too serious and needs some humor to lighten her speeches. She admires his ethics, and he is drawn by her public stance on issues important to him. Thus begins a series of fish out of water events for Fred, and, of course, the two, despite being so different, begin to develop more than a professional relationship.

But with her long-time aide Maggie ((June Diane Raphael) regarding Fred as a hindrance to her boss’s political aspirations, can this match last, not to speak of can such a slouch spruce himself up enough to fit in with Charlotte’s high level of society and diplomacy?

Bob Odenkirk is hilarious TV-Star-turned-President, who has told Charlotte that he will not return for a second term. His ambition to something bigger than the Presidency of the USA? An opportunity to become a movie star. What a delightful take on our celebrity-turn-politician culture! Andy Serkis also does a good turn caricaturing the Steve Bannon-like a media mogul. Kudos also to June Diane Raphael and Ravi Patel as Charlotte’s worried aides.

At a little over two hours, this might seem a bit long for a Rom-com, but the time passes very quickly. This is an enjoyable little movie that has some political barbs, but not so that the romance is eclipsed by the satire. One of those “barbs” just came to mind, so let me end by describing it—The President tells Charlotte that he will endorse her candidacy for President, supposedly complimenting her by saying, “You have been a good secretary.” She quickly adds “of State.” His omission stems from centuries of patriarchy!

In this satirical Rom-com a sloppy but sharp journalist becomes a speech writer for a female candidate for US President.
Editor Rating ★★★★★4 out of 5
More Details