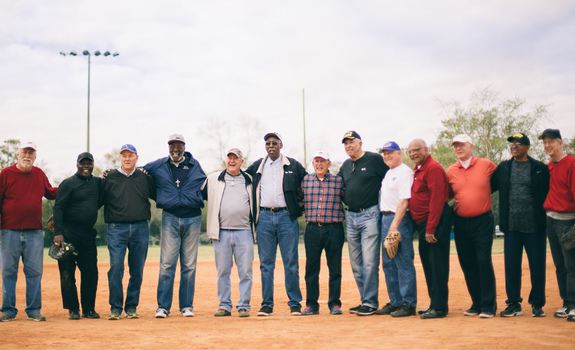 Happy are those who observe justice, who do righteousness at all times.

Documentarian Jon Strong takes us back to 1955 when segregation still prevailed in most baseball venues, including Little league Baseball, despite Jackie Robinson’s breakthrough eight years earlier. The Pensacola Jaycees All-Stars was the first entirely African-American team of its kind in Florida, and they were winners, partly due to the refusal of other district winners, who were white, being willing to play them, and thereby forfeiting the game. However, the 12-year-old members of the Orlando Kiwanis team and their coach went against the tide and agreed to play them. Sixty years later strong managed to bring together the two team captains and some of the players to talk about their experience.

Team captains Will Preyer (Pensacola) and Stewart Hall (Orlando) embrace and fondly recall the events of that day, as do numerous of the players. The Jaycees recall how other all-white teams refused to play them and tried to maneuver around the rules. They were thwarted by the national LL leaders who insisted that the rule of forfeiture was to be invoked if a team declined to play a rival, regardless of the reason. That all Florida teams but the Orlando Kiwanis did so demonstrates the depth of racism that gripped the South in the 50s. It was akin to the decisions of so many municipalities that closed down swimming pools and schools rather than integrating them.

Something similar was playing out in Charleston, South Carolina. The Cannon Street YMCA All-Stars, also composed of African-American boys, won the state championship after 61 all-White teams forfeited. They were entitled to go to Rome, Georgia for the regionals. However, Pete McGovern, the executive director of Little League, declared they could not go. This was partly due to a rule that a team winning the state through forfeitures could not go beyond the state level, and also because so many threats had been made against the boys lives that there was genuine fear for the boys’ safety.

The reminisces of the Pensacola and Orlando men differ greatly, the Blacks telling of the scourge of racial discrimination and the Whites talking of how great it was growing up in the South. The Whites claim they had little contact and thus didn’t think much about Blacks. The latter speak of the horrendous fate of Emmitt Till, the Chicago teenager tortured and murdered in Mississippi for allegedly whistling at a white woman. Visually their dark memories are enhanced by a collage of scenes of Civil Rights events. As I listened to some of the White comment on current events, I wondered if they had really progressed. A couple seem to have done so, but It is evident that some still live in their bubble of White privilege, which the filmmakers in their eagerness to celebrate progress in interracial affairs, could be accused of glossing over.

Along interviews with surviving members of the two Florida teams,  director Strong includes personal conversations with Major League Baseball players and Civil Rights leaders Hank Aaron, Cal Ripken, Jr., Gary Sheffield, Davey Johnson and Ambassador Andrew Young. Although they gave nothing to add to the Florida ball game, they speak of the struggles of Blacks and how baseball contributed to their fight for dignity and recognition. No doubt, too, their names attached o this worthy film will prove helpful in drawing attention to it. That forgotten game played back in 1955 deserves to be remembered, and this is just the film, despite my qualms, that can do so, satisfying both sports fans and devotees of racial justice (well partially the latter). I don’t know if the filmmakers are consciously evoking Sam Cooke’s great CR song when they chose the film’s title, but because that unusual game (for the times) between Black and white boys took place so long ago, it is certainly appropriate. And as the two films about Jackie Robinson breaking the color barrier in the major leagues show, it was sports that brought Blacks and whites together. They are far more integrated than those who have long sung “In Christ there is no East or West/In him no North or South..” but do so in separate churches.

Members of 2 Little League who played the South's first BB game in 1955 meet * reflect on that game & the race situation then and now.
Editor Rating ★★★★★4 out of 5
More Details