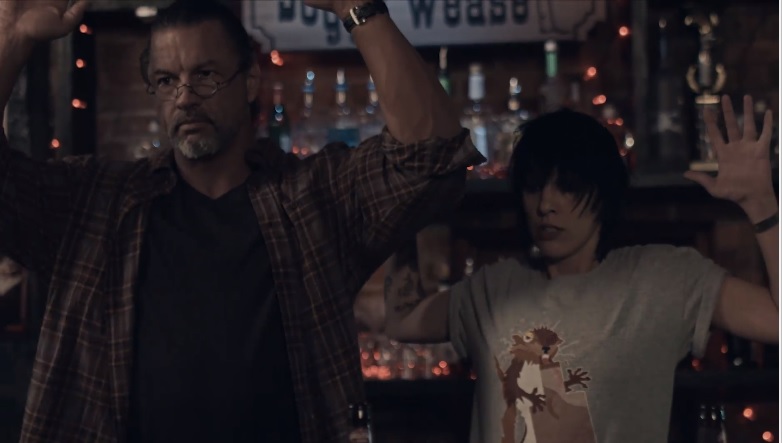 Adventure lovers will enjoy this independent film about a daughter and her father caught up in a corporate espionage caper, directed by Brian Cunningham and Matt Niehoff. Nik (Abisha Uhl) is working as a bartender at her father’s bar “The Soggy Weasel.” Their relationship is strained a little because she has bigger plans for her life, and because she prefers girls to men. Nonetheless Murphy (Al Snow) loves his scrappy daughter.

One day Brooke (Lauren Albert) shows up at the bar, just as Nik is answering  LeighAnne’s (Katie Stewart) question about what would constitute her dream girl. Nik and the newcomer lock eyes, and the former is so smitten that she drops her glass. The feeling might be mutual, but the two have little time to exchange any feeling, Brooke whispering to Nik that she has no idea what is happening in the bar.

It is true. A stranger has arrived who engages in sex with the tavern’s waitress in a toilet stall, and then a gang of thugs barges in. The leader is the cold-blooded Boland (John Wells) who soon shoots-up the place. When the intruders at last confront father and daughter they demand to know the whereabouts of the thumb drive that the stranger had brought in . It seems that the now dead stranger had hacked some trade secrets from a major manufacturer of toothpaste and such, and a rival CEO will pay millions for it.

Of course, our plucky heroine knows where it is, but will she survive the ordeal? Brooke turns out to be more than just a pretty face. A trained corporate assassin, she can shoot and fight the guys in high-kicking encounters. There follows a series of violent battles and chases, with the body count mounting ever higher. As is the usual case in such films, the goons cannot shoot straight.

The characters are all likable, and Boland proves to be as brutal and unfeeling as any Russian spy, even though he is working for an American corporation. Business-oriented viewers thus probably will write this off as another anti-business work, but those wanting a bit of escapist entertainment with a father/daughter theme might find this as good as any of the big budget studio productions.

Note: In case the film doesn’t come to your area, check it out at #LossPreventionMovie on iTunes, Google Play and Amazon.

The review will be in the Dec. 2018 issue of VP, but no discussion questions.

A young lesbian tending bar for her father meets her dream girl but might not survive, dreamgirl being a hired gun for a corporation seeking a thumbdrive of stolen corporate secrets.
Editor Rating ★★★★★3 out of 5
More Details