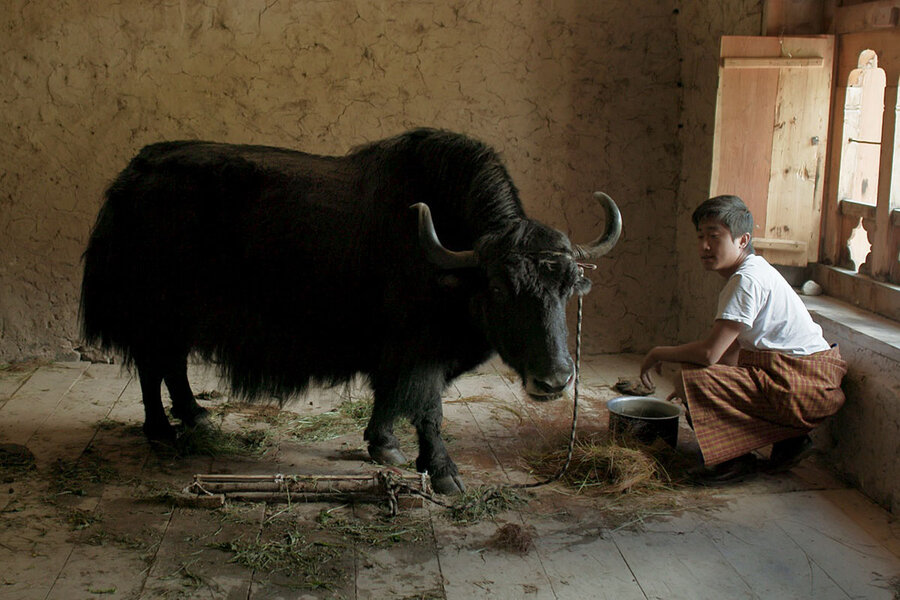 None of you should be looking out for your own interests, but for the interests of others.

There really is one of these horned animals of the title in this charming teacher film set in the Himalayan Mountains of Bhutan. Although the plot of a person hating his/her assignment and then warming to and loving the people and the difficult situation is familiar, the setting definitely is not. The mountains and fields, as photographed by Jigme Tenzing, are truly beautiful, the fields especially so when the grain comes to a head. The setting of this film is indeed exotic, but the theme of welcoming friendship and the transforming power of love and respect is universal.

The film, written and directed by Pawo Choning Dorji, centers on Ugyen Dorji, a recent university graduate who has been slack in fulfilling his teaching obligations he agreed to for his student scholarship. His disgusted supervisor accuses him of being the most unmotivated teacher she has seen. He wants to pursue a singing career in Australia, but she assigns him to teach at the most remote school in the nation, and probably in the world.

The small village of Lunana is up twice as high as the capital Thimphu (population 101,238, altitude 2,201 meters) to Lunana (population 56, altitude 4,800 meters), reachable only by a bus trip and then an arduous 7-day trek. Ugyen’s guide are the friendly Michen and Singye (Tshering Dorji). Despite Ugyen’s constant complaining, Michen manages to retain his warm, supportive attitude toward the teacher, addressing him as “Sir.” As they trek higher each day, titles in the lower left corner show the differences between what Ugyen has left and where he is bound– Thimphu (population 101,238, altitude 2,201 meters) to Lunana (population 56, altitude 4,800 meters). He communicates little with his guides, nor does he take in much of the scenery because he constantly listens to the music playing through his headphones. One luxury Michen has purchased for him is toilet paper, knowing that his Westernized charge will not want to use leaves for wiping. This portion of the film reminds me of my favorite fish out of water TV series, Northern Exposure, the protagonist of which was a doctor who wanted to be anywhere but where he was assigned, a small town in frozen Alaska.

Finally drawing near the village after their arduous trek, Ugyen is surprised to spy ahead all of the villagers who have walked for two hours to greet him. He is told of the great respect for teachers and the hope of the adults that their children will gain enough learning to rise above the status of herdsman. This has little effect on the newcomer, he telling the Village Headman Asha Jinpa (Kunzang Wangdi) that he wants to go back immediately. Asha retains his initial friendliness at such an unwelcome request by agreeing, but saying that it will have to be after two days, allowing his guides to rest. As expected, Ugyen is repelled by his crude sleeping cabin, warmed only by a crude stove that must be relit each morning. Only with the help of others does he learn how to star a fire with dried yak droppings. (At first he gathers the fresh, softer ones!) He is even more repulsed by the foul outhouse where one has to squat. He is disappointed there is no internet and the solar power frequently fails, thus requiring them to use oil lamps at night.

Ugyen is introduced to the class captain Pem Zam (playing herself), a small, captivating girl who has high hopes for him. She tells him that teachers are highly respected because they touch the future of those whom they teach. From her he learns the rudiments of building a fire with yak droppings, and when he is late getting up, serves as his alarm clock. He does agree to meet with the class, and is surprised that there is no black board. The children do not even know what a blackboard is. There are no supplies either, except for a few educational books and small amount of paper in an old suitcase left behind by a previous teacher, apparently no more motivated than he is.

Apparently the kindness of everyone and the eagerness of the children to learn affect him, because he tells the Headman that he will stay for the summer. (The term is scheduled to end just before the bitter cold of Winter begins and the snow makes travel impossible.)

Ugyen finds himself changing as the days past. He meets the lovely Saldon (Kelden Lhamo Gurung), a yak herder whose beautiful voice and song captivates him. Earlier he had refused to join Michen in singing a folk song, but as the days pass and the children love their way into his heart, he asks her to teach her song to him. Motivated now as a teacher, he creates a make-shift black board and chalk and teaches lessons in both their Dzongkha language and in English. When the meager paper supply is exhausted, he impresses the children when he takes down the large sheets of tough paper that keep the wind from blowing into his hut and tears it into small sheets for them. He also comes to respect the villagers spiritual beliefs, which he had formally disdained due to his urban cynicism.

The culture clash between Ugyen’s Western-oriented values and the so-called “primitive” values of the people of Lunana is beautifully handled, the director-writer obviously respectful of both. His is the story of a man who brings learning to the children, but is also enlightened by them and their trusting elders. As the summer recedes and Michen informs Ugyen that soon they must go, the teacher is torn between his long-held dream of leaving his native land to chase his dream of becoming a singer and the pull of a people whom he has come to respect and love. There is the hint of an attraction between him and Saldon, but to its writer’s credit, it remains just that. Whatever Ugyen decides, the filmmaker makes clear, he will be a better man for what he has learned—and been enabled to give in ways he had not imagined before. Although you will come to like and respect this surly man, I suspect the one who will really capture your heart is little Pem Zam, whose infectious smile lights up the screen whenever she appears. She no doubt has never heard of Shirley temple. “America’s Sweetheart,” but her charming smile is far more natural.

Early in the film we learn that Bhutan has an official “Gross National Happiness,” which it considers as important as other nations consider their Gross National Production. Clearly, the villagers of Lunana have embraced this goal, finding it in their music and their love of the mountains. Filmmaker Pawo Choning Dorji has embodied this beautifully in his Oscar contender, capturing also the universal spirituality of the people.  I hope we will be hearing more from this man of vision.

The film, beside showing in theaters, is also available on Amazon Prime Video, Google Play, and Apple TV+. It is in Dzongkha with English subtitles and is unrated.

This character transformation film about a teacher is set in an isolated village of yak herders in the mountains of Bhutan.
Editor Rating ★★★★★5 out of 5
More Details