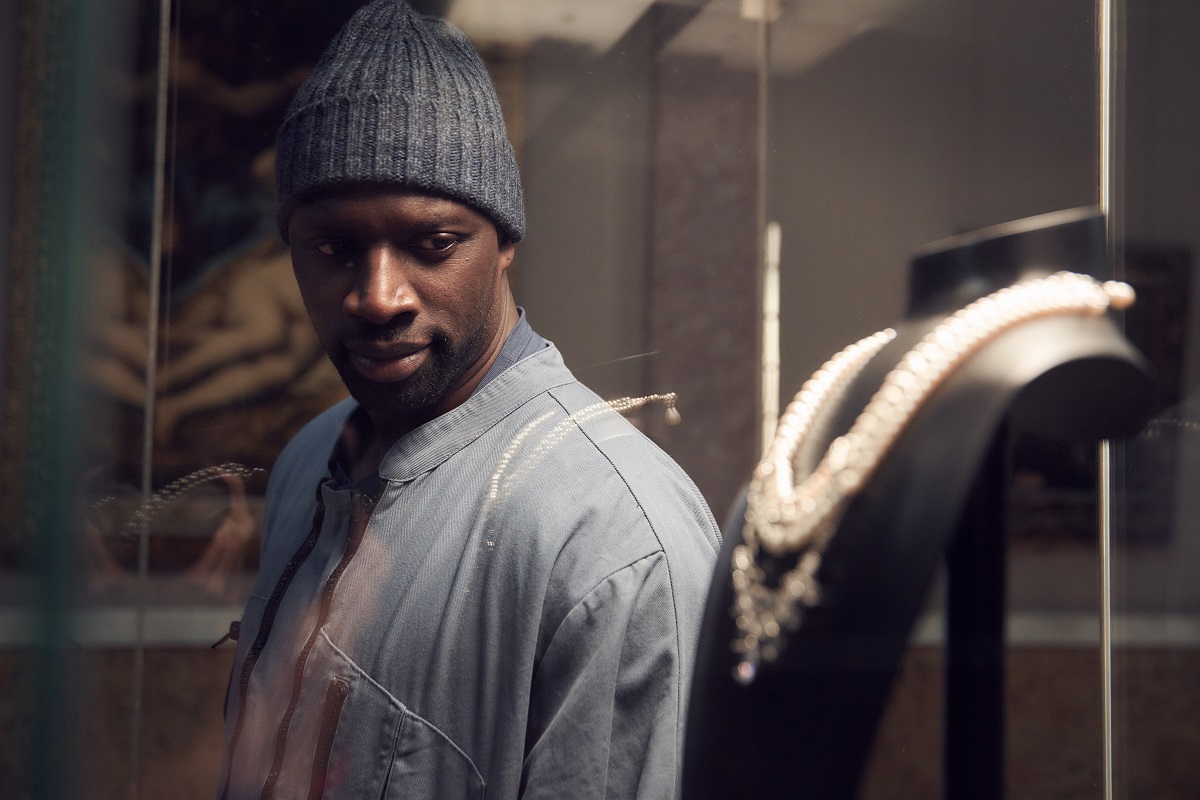 
And I will make justice the line, and righteousness the plummet; hail will sweep away the refuge of lies, and waters will overwhelm the shelter.


Thus says the Lord: Act with justice and righteousness, and deliver from the hand of the oppressor anyone who has been robbed. And do no wrong or violence to the alien, the orphan, and the widow, or shed innocent blood in this place.

The French writer George Kay has created a truly thrilling escapist adventure series with more than a touch of social commentary. He has taken a classic series of French novels revolving  around Arsène Lupin as a “Gentleman Thief,” whose thefts are committed in order to bring about justice, and transferred them to a modern day outsider, Assane Diop (Omar Sy). Assane is the son of a Senegalese father wrongfully accused of stealing a royal necklace from the wealthy Hubert Pellegrini (Hervé Pierre). The father died in disgrace in prison as a result, leaving the boy to grow up believing that his father was guilty.

It is the fictitious thief/detective that Assane patterns himself after, his alias Paul Sernine derived from Arsène Lupin. He amasses a series of costumes, props and disguises that he will use throughout the series to dodge in and out of prison, museums, mansions, apartments, and such in his quest for vengeance and justice.

The story switches back and forth from 1995 when young Assane Diop (Mamadou Haidara) was a scholarship student making friends with the two people who would become his life-long associates, to the present when the grown Assane, who has practically memorized the original Arsène Lupin novel and its almost two dozen successors, has learned that his father had been framed. He takes on the alias of  Paul Sernine so he can attend an exclusive auction at the Louvre and place a false bid on a valuable necklace once worn by Marie Antoinette. The owner of the necklace is the villainous Hubert Pellegrini (Hervé Pierre), super wealthy plutocrat and friend of cabinet ministers. This is the necklace that Assane’s father Babakar Diop (Fargass Assandé) allegedly had stolen. Solving the mystery of its disappearance and reappearance will lead Assane through a labyrinthine series of twists and turns that will keep you on the edge of your street, eagerly wondering what comes next.

In a way the story is about the legacy of an immigrant father to his son. It was from the library of Pellegrini that the father took the novel that he gave to his son to encourage the boy to read. Assane will pass this same book to his own son Raoul (Etan Simon) in the hope of weaning him away from his over-used cell phone. As the father had done, the boy becomes so captivated by the novel that he is soon consuming all of the others in the series as well. It will be from one of those books that Assane obtains by a complicated maneuver the clever means of getting put in prison to gain access to the copy his father had written clues in. Assane will find his father’s markings and—well, to call this “complicated” is an understatement. Watch and see for yourself.

Lupin rises above the norm by including so many other characters of interest, as well as the “Gentleman Thief.” There is Juliette Pellegrini, Hubert’s beautiful daughter, unaware of his nefarious dealings as she sets about launching a charitable foundation and raising money for its program of enabling poor children to experience the arts. She is attracted to Assane and will figure prominently in his incredibly Byzantine plot for justice. Once she learns of her father’s evil ways she will be torn between her love for him and for Assane. In the flashbacks she is played by Léa Bonneau, and in the present by Clotilde Hesme.

More important in Assane’s affections is Claire (Ludmilla Makowski in flashbacks and Ludivine Sagnier in the present). He had met Claire in school where she was one of two students who befriended and supported him against racist bullies. They grew so close that they became lovers, siring Raoul, until a falling out drove them apart. Nonetheless, they have remained on friendly terms out of concern for their son, as well as the embers of their once passionate affair that still smolder.

The other life-long friend from school days is Benjamin Ferel (Antoine Gouy) who now makes a living as a jeweler and dealer in antiquities. His expertise is very handy when Assane obtains the Queen’s Necklace. The latter will use the gems from that necklace as an incentive and as a reward for those he wants to use in some way.

Along with several thugs who answer to Pellegrini is Inspector Gabriel Dumont (Johann Dionnet as young Dumont and Vincent Garanger in the present). It was he who first investigated the theft of the necklace and worked to obtain a confession from Babakar. When the old man refused to sign a confession, Pellegrini got Dumont to work on Pellegrini’s’ wife Anne (Nicole Garcia ), convincing her that the guilty man would get a better deal if he cooperated. She in turn convinced Babakar would be dealt with leniently if he signed the paper. When the court dealt with him severely, she became estranged from her husband, living with a sense of guilt, especially after the father died in prison. At the present Dumont is the commissioner of the Paris police department but still under the thumb of Pellegrini, and thus able to keep the latter abreast of the investigation and pursuit of Assane.

There is a moving encounter between the fugitive and pursuer when Assane kidnaps Dumont for an intensive interrogation of the man concerning the robbery of the necklace and the treatment of his father. Dumont emerges as a concerned husband and father caught in the middle of the intrigue—so much so that the vengeance-consumed Assane will do something that we rarely see in this kind of film.

We also become acquainted with the three members of the team of police assigned to track down Assane. They are Captain Romain Laugier (Vincent Londez), Lieutenant Sofia Belkacem (Shirine Boutella), and Youssef Guedira (Soufiane Guerrab). Of these, Guedira is the most interesting because he too is a fan of the Arsène Lupin books. Early on, from observing Assane’s modus operandi, he thinks he sees a connection with those books that could be important to solving the identity of the man known as Paul Sernine, the fake buyer of the necklace at the Louvre auction. His colleagues brush him off, thinking his theory too eccentric—until… .He will later become involved with Assane in a very unexpected way.

The last character worth describing and who, despite appearing in just one episode, will probably leave a lasting impact on viewers, is the washed-up journalist Fabienne Bériot (Anne Benoît). Once well known and respected, she had investigated Hubert Pellegrini and his dirty arms dealings, even taping him talking about a terrorist attack on a French embassy in Kuala Lumpur. She had even written a book on this, but Pellegrini had been able to use his high government connections to discredit its claims and her character. Instead of his being exposed, she had been disgraced and blacklisted, forcing her into an alcoholic retirement. Although Assane finds her reluctant to enlist in his cause, he persists, so that when she yields, she feels a new surge of vitality and purpose.

Although it is the action (lots of chases and fights) and extremely clever ways that Assane gets in and out of his escapades that make this a binge evoker (I watched the 10 episodes over two nights), the occasional societal references make me especially cherish the series. Early on Assane observes that the upper class live in their own world and seldom take notice of those under them who do their bidding. Thus he is able at times to slip in under their notice—such as in the first episode he gets into the Louvre by posing as a janitor, and later into a banquet as a waiter. His Senegalese origins make him an outsider—other immigrants from Europe might eventually be able to blend into French society, but his dark skin will mark him forever. At his school several of the boys regard him as an intruder, hence their bullying him. America is not the only nation with a race problem, we see.

The photography is excellent, showing off the charming streets of Paris, often with the white dome of Sacré-Cœur Basilica gleaming in the distance during the day, and at night the search light from the Eiffel Tower sweeping across the sky. I especially loved the many shots inside the Louvre with its walls lined with famous painting. Great fun to see Assane as a janitor stopping for a moment in front of the Mona Lisa as if they were exchanging smiles or some secret known to just the two of them.

Some of Assane’s escapades might seem far-fetched, but his can-do perseverance in the pursuit of justice will both amuse and inspire you. Little wonder this series has become so popular on both sides of the Atlantic that Netflix has ordered a third series. I have joined the ranks of those eager to tag along on the next round of adventures. I also expect and look forward to seeing actor Omar Sy becoming an international star in film.

This complicated tale of the son of a wronged Senegalese immigrant seeking just through a complicated series of plots unfolds in Paris.
Editor Rating ★★★★★5 out of 5
More Details