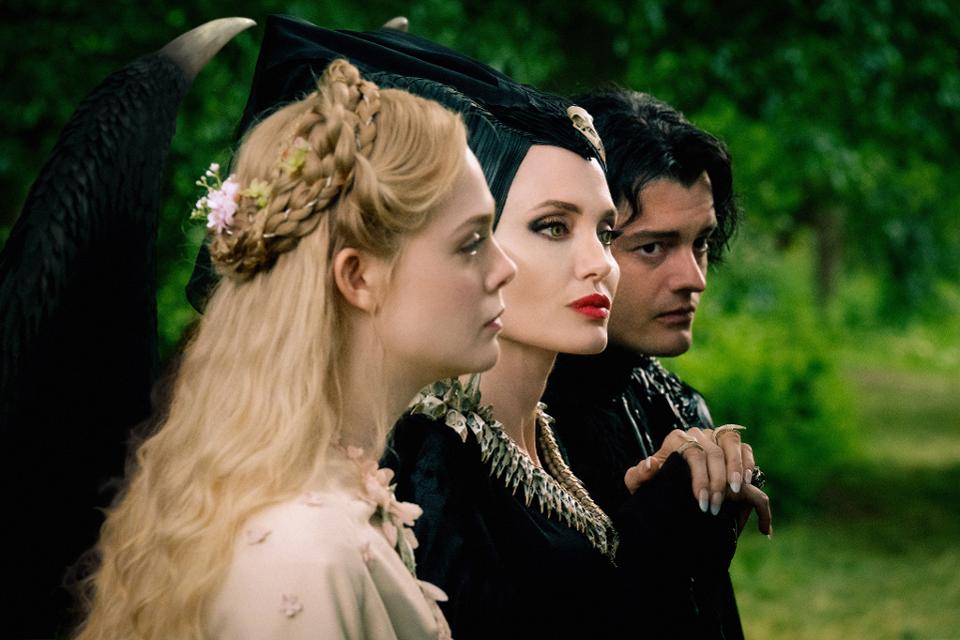 Whoever is pregnant with evil conceives trouble and gives birth to disillusionment.

In director Joachim Rønning’s film the Psalmist’s observation does not apply to the title character. If you saw the 2014 Maleficent, you know that Angelina Jolie’s character does not live up to her name. In Disney’s remolding of the Sleeping Beauty fairy tale the humans-hating Maleficent encounters Princess Aurora (the beauty in the tale) many times as the girl is growing up hidden away from her father’s castle. Seeing that the girl is kind and not at all like the man who had betrayed her, Maleficent comes to love her—and later when Aurora falls into her deep sleep from the needle prick, it is Maleficent’s kiss of true love that awakens the princess, not Prince Philip’s.

In the sequel Maleficent serves as protector of the fairyland known as the Moors and has installed her goddaughter as its queen. Aurora and Prince Philip did not marry in the first film, so it is in this second one that Philip (now played by Harris Dickinson) proposes and Aurora (Elle Fanning) accepts. Maleficent, scorning humans because she had been betrayed by one, is not pleased with the news, but she reluctantly accepts her daughter’s decision. Wanting to introduce his betrothed to his parents, King John (Robert Lindsay) and Queen Ingrith (Michelle Pfeiffer), Philip, at the instigation of his mother, invites Maleficent as well as Aurora to come to the palace to meet his parents over a banquet. Thus, we have a set-up that some critics have likened to Guess Who’s Coming to Dinner.

Maleficent even goes along with her daughter’s suggestion to wear a black shawl over her imposing horns so as to appear less intimidating. Although King John, who sees the marriage as a way to ensure peace between his kingdom of Ulstead and the Moors, his wife’s barely concealed hostility reveals she has different intentions. Everything about the banquet, including the place setting that includes iron utensils—iron is the Kryptonite for Maleficent and faeries—is meant to upset their guest. Matters explode between Ingrith and Maleficent during the dinner, with Aurora, led to believe her godmother is at fault for King John falling into a coma, siding with her potential in-laws and Maleficent seriously wounded as she flies away into the night. Ingrith’s nasty assistant Gerda (Jenn Murray) fires an iron bolt at her.

Maleficent finds sanctuary in the huge subterranean cavern where her fellow Dark Fae have fled. As she convalesces, she learns more of her background—that she is descended from the Phoenix as well as the dark Fae. She encounters two leaders representing opposing views, the hot-tempered Borra (Ed Skrein) and the thoughtful Conall (Chiwetel Ejiofor). The former is for an all-out war against the humans, whereas Conal is a counterpart to King John, seeking a peaceful relationship.

Back at the palace, while keeping Aurora in the dark as to her plans to destroy all faeries, Ingrith insists that her son and Aurora go ahead with their plans to marry. Thanks to her machinations, the film moves from Guess Who’s Coming to Dinner? into Lucretia Borgia or Games of Thrones territory. The Queen spouts her belief in using fear to extend power and play upon her subject’s xenophobia, her efforts leading to genocidal proportions when war breaks out. Adults will get the point, especially in the scenes involving the Queen’s diminutive alchemist Lickspittle (Warwick Davis), a dewinged pixie who conducts experiments on kidnapped faeries—shades of Nazi labs and Dr. Mengele! There is also the scene in which faeries are locked in a chapel where Gerda at the organ seeks to burn them up. These make this film questionable for children. Let parents beware. The film does teach tolerance between those who are different, but this message might be lost amidst the cartoonish violence of the climactic battle scene. Due to extensive CG this is almost as spectacular as those in Lord of the Rings.

The film has many beautiful special effects-enhanced scenes, such as an opening one that starts with a view high above the fairyland and then swoops down, in and out. The shapeshifting raven Sam Riley adds a sense of levity as Maleficent’s shape-shifting assistant, Diaval. Some will find Ingrith’s fate amusing as well.

All in all, there is plenty to admire and enjoy about this re-invention of the old fairytale, but also plenty to be wary of. I would urge parents to see it first before exposing their younger children to its violence and dark perspective.

This review is in the November issue of VP along with a set of questions for reflection and/or discussion. If you have found reviews on this site helpful, please consider purchasing a subscription or individual issue in The Store.

The reimagining of Sleeping Beauty continues with Maleficent warring against evil Queen Ingrith who for a while tricks Aurora into believing her godmother is an enemy.
Editor Rating ★★★★★4 out of 5
More Details