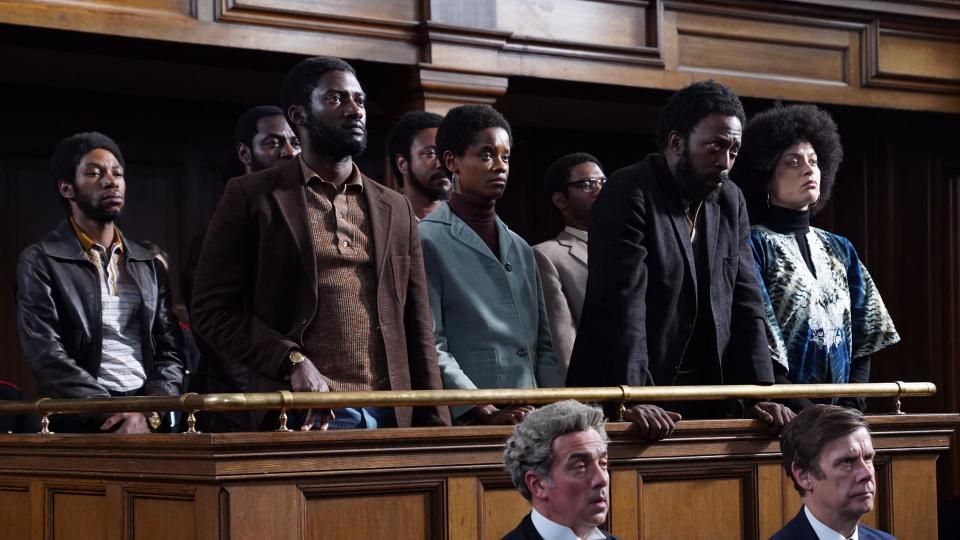 He will make your vindication shine like the light, and the justice of your cause like the noonday.


But when he saw many Pharisees and Sadducees coming for baptism, he said to them, “You brood of vipers! Who warned you to flee from the wrath to come?  Bear fruit worthy of repentance.  Do not presume to say to yourselves, ‘We have Abraham as our ancestor’; for I tell you, God is able from these stones to raise up children to Abraham.  Even now the ax is lying at the root of the trees; every tree therefore that does not bear good fruit is cut down and thrown into the fire.

Proverb–popularized by Bob Marley in his 1973 song "Small Axe".

Americans have Aaron Sorkin’s  social justice film The Trial of the Chicago 7 and now our British cousins have Steve McQueen’s masterful Mangrove, the true story of The Mangrove Nine. The British director whose 12 Years a Slave so brilliantly explored the history of slavery and racism in America reveals that hos own country also is deeply infected by the deadly social virus. Just as Selma led to the passage of major voting legislation by exposing the depth and violence of racism, so the trial of West African-Brits brought about similar exposure and passage of anti-racist legislation in the UK.

At the center of the film is Frank Crichlow (Shaun Parkes), who is attempting to leave behind a shady past by opening The Mangrove Cafe in London’s Notting Hill neighborhood. With its mouth watering Jamaican food and window sign proclaiming “Black Owned,” the place quickly becomes a gathering place for West Indian immigrants who are so often made to feel unwelcome at other establishments. Groups such as the Black Panthers use its upstairs hall for their meeting places. Customers come not just to eat, but to converse, dance, celebrate, and play table games, creating a festive atmosphere.

The racist cop PC Frank Pulley (Sam Spruell) surveys the comings and goings. He is sure that Crichlow has not given up his past misdealings, and so he frequently leads raiding parties to disrupt the camaraderie of the café. He seems to enjoy smashing some of the artifacts on display. The patrons, fearful of being caught up in the police-induced violence, stop coming. Black Panther leader Altheia Jones offers Crichlow the support of her group, but he refuses at first in his futile attempt to stay apolitical. “ “This is a restaurant, not a battleground,” he says. Despite his protestations that he no longer is involved in gambling, Pulley keeps barging in and dragging him and other patrons down to the station. Crichlow has no illusions about securing justice, declaring, “The system? Crooked as a damn ram’s horn, that’s what it is.”

It is activist Darcus Howe (Malachi Kirby) whose arguments bring Crichlow to realize that he must fight back. A community-wide march is called, the marchers to protest the brutal unjust of the police harassments. Altheia proves to be a firebrand, rousing the marchers to chant and march. The police turn out in force, most equipped with shields made of tough, clear plastic which they use skillfully in the following clash. It is they who actually start the riot, which ends with dozens of marches, and of course the principals, arrested, many of them beaten by the cops’ truncheons. The camera places us right in the middle of the mayhem, effectively raising our ire at the patently unjust actions of the cops.

The leaders, becoming known as the Mangrove Nine, are arraigned in court and charged with inciting a riot and another vague term. The proceedings are to be held in Old Bailey, usually the venue of more serious crimes such as murder and treason, so the government is showing that it is serious in their unjust prosecution. Ian McDonald (Jack Lowden) and another white lawyer becomes the group’s counsels, and we soon se they would handle the defense in very different ways. The older man would rather work out a plea deal than fight in court, and for some time Crichlow is so dispirited that he seems ready to accept a deal that would still involve jail time, but at a reduced rate.

However Altheia and Darcus  adamantly reject this route. Altheia Jones speaks for them both when she proclaims, “We mustn’t be victims, but protagonists of our stories. And what better way of representing ourselves than self-representing ourselves.” Ian heartily agrees, agreeing that this is “Brilliant!” He explains that this would, under British Law,” give each of them the right to directly address the court and to cross examine witnesses. The group will need all the eloquence and skill of the two advocates, it becoming clear that the stern judge presiding over the trial is  very much on the side of the police. I am not sure whether it is he or the prosecutor who declares after PC Pulley lies throughout his testimony that surely no one would believe that an officer of the law would lie in presenting his testimony. American viewers will smile at this as they recall what a difference cameras have made in this country when their images revealing police brutality contradicted the official reports of police encounters with young black men!

The depiction of the trial, which dragged on for 11 weeks, with the nine sitting together in the dock and all the officers of the court wearing their tawdry-looking wigs, will satisfy all lovers of courtroom dramas. As Judge Edward Clarke (Alex Jennings) glares at them as if they were already convicted the two activists make a mockery of PC Pulley’s testimony by pointing out its numerous contradictions, loopholes and impossibilities. Darcus Howe gives an incisive closing argument calling out the racism that is rooted “somewhere in the stench of British colonialism.” If this were heard in a theater, I can well imagine the audience joining in the cheering that comes from the spectators watching the proceedings in the balcony.

It is good that the film casts the white counselor as an ally rather than a savior, with the Blacks taking on most of the burden of their own fight against injustice—beginning when they decide to suffer no longer in silence, but to protest in public, and then at their trial, assuming to speak for themselves. This is one time when the old adage, “A client who is his own lawyer has a fool for defense,” does not hold.

As with his adaptation of 12 Years a Slave, McQueen spins a parable of justice consistence with the God of the Bible who demands that his people, from king to commoner, pursue justice in their dealings. And even his title for his five films exploring the West Indians’ fight for justice in the UK stems eventually from Christian Scripture. Bob Marley’s song, directed at those who controlled the music industry in his company, is full of references to the Bible, including the Gospel stories of John the Baptist angrily denouncing the tyrannical authorities of his day and promising their destruction by an axe.

In Britain this is the second film in McQueen’s series, which there began with the somewhat lighter film about a house party, Lovers Rock. That film, which we will review next, is a celebration of West Indian joi de vie, music, and love, with just hints of racism in the background (except for the denouement the following morning, of course). Maybe it was felt that starting out in the UK on a lighter note was a better way to bring the audience of majority whites along so that they could more readily side with the Black West Indians and accept that the portrayal of the racist PC Officer Pulley was not an overdone caricature in the four subsequent films. Americans, having a long history of brutal lawmen, from Bull Connor and Chief Pritchard in the 60s to the bully Derek Chauvin who knelt on the neck of George Floyd until he quit breathing. We know that these and Officer Pulley are cut from the same cloth, and that it would be difficult  to over-emphasize their callous brutality. But the film, too, recognizes that the problem is not just that of an individual “bad apple,” but that Pulley is part of a system of racism—witness the behavior of the judge. McQueen will make this even more plain in the third film of his anthology, Red, White and Blue, in which a Black man joins the police force in order to change it within. The Black protagonist in that film lacks the supportive community that surrounds and supports Frank Crichlow in this film; his, as we will see, is a very lonely struggle, and thus all the more painful. And this is another take away from Mangrove, the need for community in the struggle for justice. People of faith know that the prophet Jeremiah, in daring to berate his own country for its idolatry and injustice, was not alone, but accompanied by his loyal secretary Baruch and other disciples, including a few members of the royal government, the latter literally saving his life at times. And of course, we know that Jesus had the Twelve.

I wish I had seen the films of this anthology earlier, as there is no doubt that Mangrove would have made my Top Ten Films list for the year. It alone is worth the monthly fee for joining Amazon Prime Video!

The racism of the London police trigger an uprising of London's West Indian Community when the cops continually raid their beloved Mangrove Cafe.
Editor Rating ★★★★★5 out of 5
More Details