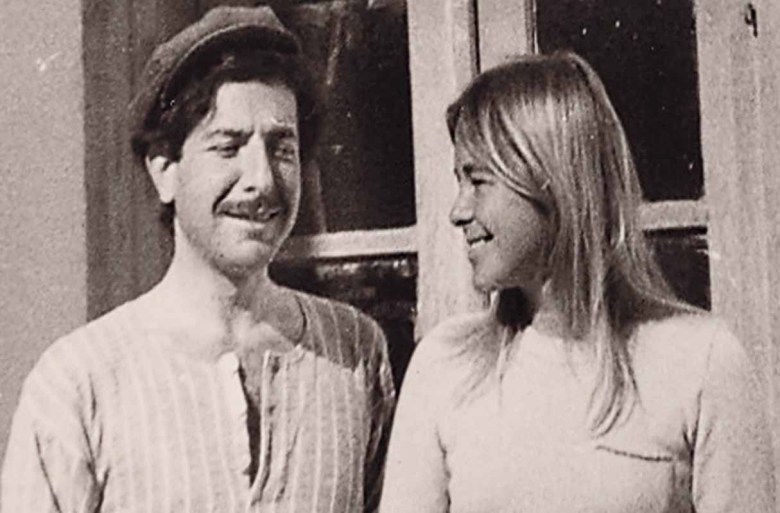 If, like me, you have listened to the many versions of Leonard Cohen’s magnificent “Hallelujah” on YouTube, you will want to search out this small indie documentary. Director Nick Broomfield has assembled some amazing clips of home movies, archival video (such as that taken at), interviews and photos that tell the poignant love story featuring the poet/songwriter and the woman who was his muse, Marianne Ihlen, a young Norwegian single mom who Cohen met in the early ’60s on the Greek isle of Hydra, and ends only with their deaths a short time apart in 2016.

Writing poetry and unsuccessful novels, Canadian-born Cohen spent 7 years on the island enjoying its many pleasures, one of which was Marianne, with whom he lived. When he went to New York City to concentrate on poetry and song writing, his affair with Marianne was off and on over the years. In the clip shot at a huge festival in England he introduced the song named after her by rhetorically asking if she was there. Judy Collins, who helped spread his popularity as a songwriter by including “Suzanne” in one of her albums, relates how at Newport she persuaded the reluctant songwriter to go on stage with her. After that success his fame kept growing.

Leonard and Marianne tried to maintain their long distance relationship, and she even for a time moved with her son Axel to New York City to live with him, but his roving eye led him astray. Over the years they kept in contact on a friendly basis. When she lay dying in a hospital Leonard wrote her an email, saying

I’m just a little behind you, close enough to take your hand. This old body has given up, just as yours has too, and the eviction notice is on its way any day now.

I’ve never forgotten your love and your beauty. But you know that. I don’t have to say any more. Safe travels old friend. See you down the road.

She had asked that a camera record her reaction, so we see her softly say, “That’s beautiful…” A few months later she died, Cohen following her a short time after that.

I did not see the 2005 documentary Leonard Cohen: I’m Your Man, so I am especially glad for Nick Broomfield’s film. Knowing but a few brief facts about the man whose poetry and songs I have loved for many years, this film filled me in. In the five short biographies I read on line, not a one even mentioned Marianne and her important role in Cohen’s life. All include brief accounts of his several year stay at a Buddhist center in California, but fail to include this woman’s important influence in his life. As the subtitle affirms, there were (many) words of love passed between them, though sometimes expressed in a strange way, as in this line from “So Long, Marianne,” “I’m standing on a ledge/and your fine spider web/is fastening my ankle to a stone”).

Most of the excellent archival film is of Cohen, with just a small portion showing Marianne. Most notable is a B&W photo in which she appears as an ethereal blond beauty, which makes it easy to see how she could attract men. I wish there could have been more such material that brings her as much to life as the more extensive footage of Cohen does for him. But then what we do have is fascinating, leaving us with a portrait of a very flawed but creative genius. As I continue to listen on YouTube to his wonderful music, many scenes from this documentary will come to mind.

The story of poet/songwriter Leonard Cohen's on/off relationship with his muse Marianne Ihlen that began on a Greek island in the 60s.
Editor Rating ★★★★★4.5 out of 5
More Details