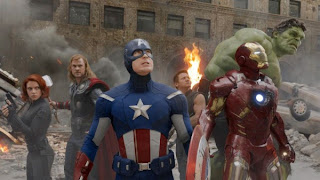 Two are better than one, because they have a good reward for their toil. For if they fall, one will lift up the other; but woe to one who is alone and falls and does not have another to help. Again, if two lie together, they keep warm; but how can one keep warm alone? And though one might prevail against another, two will withstand one. A threefold cord is not quickly broken.
Ecclesiastes 4:9-12
If one member suffers, all suffer together with it; if one member is honoured, all rejoice together with it.
1 Corinthians 12.26:

The new Marvel Comics film will make more sense if you have seen the previous adventures of the costumed superheroes, but even if you haven’t, there is a lot to enjoy in this spectacular extravaganza. Director Joss Whedon, aided by co-writer Zak Penn, keeps the story moving at a fast pace, yet takes the time to develop the character of each of the  superheroes and their contentious relationships. There are plenty to keep track of, so the film’s almost two and a half hours are not at all too long a time for this. The gang includes SHIELD director Nick Fury (Samuel L. Jackson), Iron Man (Robert Downey Jr.), Captain America (Chris Evans), Thor (Chris Hemsworth), the Hulk (Mark Ruffalo), Hawkeye (Jeremy Renner) and Black Widow (Scarlett Johansson). There are also, of course, Agent Phil Coulson (Clark Gregg) and Loki (Tom Hiddleston), the adopted brother of Norse god Thor who is league with aliens to destroy human civilization.

In case you haven’t read the comics, SHIELD, the creation of Nick Fury to protect humanity from all sorts of super evil, stands for Strategic Homeland Intervention, Enforcement and Logistics Division. Whereas the earlier films dealt with one or two of the Avengers, this time Nick Fury has brought them all together because each of them is needed in a combined effort to beat back Loki and the alien race the Chitauri. Loki has penetrated SHIELD’s hidden lab where an all-powerful energy source the Tesseract is being examined. He is able to kidnap and control the minds of scientist Erik Selvig (Stellan Skarsgård) and Hawkeye in order to help him use the Tesseract, which can also open up a portal to the universe of the Chitauri so they can descend on earth. There follows a series of battles, at first high above the earth in and around SHIELDs super ship, a gigantic aircraft carrier/hover craft, and for the last half hour, a spectacular war in and around towering buildings of Manhattan. (Special effects addicts will love this incredible sequence!)

The earlier films dealt with the theme of society rejecting anyone who deviates from the norm—and no one is more deviant than our super heroes! This time the theme is well summed up by Rodney King’s famous question/plea, “Can’t we all get along?” Some of the Avengers are jealous and/or suspicious of the powers of the others. Thor and Iron Man actually come to blows in a delightful sequence. Nick Fury finds himself in the role of Scout Master/mediator, pointing out that their mission is too important, their foes so formidable that all of their gifts are needed if humanity is to be saved. It is during this middle section of the film that the script is so superior to similar films, with delightful back and forth banter between the characters. Just a sampling:

1. Bruce Banner/The Hulk: “We’re not a team. We’re a time-bomb!“
2. Tony Stark: “Let’s do a headcount: Your brother, the demigod; a super-soldier, a living legend who actually lives up to the legend; a man with breathtaking anger management issues; a couple of master assassins; and you’ve managed to piss off every single one of us.
Loki: That was the plan.
Stark:  Not a great plan.
3. Tony Stark/Iron Man:  “Dr. Banner, your work is unparalleled. And I’m a huge fan of the way you lose control and turn into an enormous green rage monster.
Dr. Banner: Thanks
4. Stark: Falling in line’s not really my style.
Steve Rogers: You’re all about style, aren’t you?
Thor: You people are so petty, and tiny.

Although by no means a great film, it will bring great pleasure to adventure lovers. The genius of Stan Lee, creator of Marvel Comics, has been well transferred to the screen in that he has given us characters with super human powers but who still have to deal with very human shortcomings—and I don’t mean those of the various villains, but of those far more difficult to deal with shortcomings, those within ourselves. Pogo was so right when he declared, “We have met the enemy, and the enemy is us.”