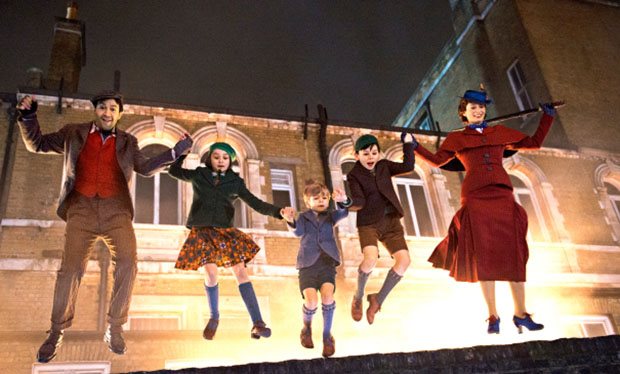 For he will command his angels concerning you
to guard you in all your ways.
On their hands they will bear you up,
so that you will not dash your foot against a stone.

Although she seems a bit more reserved than an angel, the umbrella air-born Mary Poppins is a good stand-in for one for the Banks family in the two movies about her. In the 1964 release Julie Andrews helped the neglected brother and sister, Jane and Michael Banks, draw closer to their overly busy parents in Edwardian London. Now the sister and brother have grown up, with the latter still living in the same house on Cherry Tree Lane. Jane (Emily Mortimer) is an unmarried crusader for the underdog, and Michael (Ben Wishaw) is a recently widowed father still grieving over his loss of his wife and his failure to be able to make a living by his art.

Also, Michael is so financially inept that he is in danger of losing the family home to the Fidelity Fiduciary Bank where he works as a lowly teller.  Agents from a repo company drop by to check over matters. He and Jane have just five days to make good on their overdue payments. During this situation Mary Poppins returns as nanny to Michael’s three children Annabel, John, and Georgie (Pixie Davies, Nathanael Saleh, and Joel Dawson, respectively). She takes charge of the children in her no-nonsensical way so that Michael and Jane can search for a lost bank-investment certificate bought years ago by their father. If they can find it, it should have increased in value enough to pay their debt.

Of course, when a movie involves a bank, there must be a villain. Colin Firth is the dastardly William Weatherall Wilkins who is every bit as mean as Mr. Potter in It’s a Wonderful Life. When he learns that Michael and Jane’s father had invested in the bank, he destroys the bank’s record of the purchase. It will be up to the brother and sister finding the family’s copy of the document if they are to save their home.

There are other characters also, the most notable being the bicycle-riding lamplighter Jack. Played almost as a tribute to Dick Van Dyke (chimney sweep Bert in the original) by Hamilton star Lin-Manuel Miranda, he adds sparkle to the intricately choreographed dance numbers, especially in the most delightful ten minutes of the film, a sequence melding hand-drawn animation with Mary Poppins and Jack as they enter the world of the painting on a ceramic bowl. What movie magic!

Another interesting minor character from the original film is Admiral Boom  (David Warner) and his aide Mr. Binnacle (Jim Norton). We see him often complaining that the Big Ben clock isn’t keeping proper time The two live in their ship-like residence, and they still blast a cannon at the strike of every hour, which is why he is upset over Big Ben.

While we’re mention eccentric characters there also are: Meryl Streep in a crazy cameo as Mary’s  eastern European Cousin Topsy; 92-year-old Dick van Dyke shows he can still hoof it; and Angela Lansbury, a year older than Dick, sells the family some magic balloons at the end of the film.

There is so much to like in this sequel that I am sad to report that the songs by Marc Shaiman and Scott Wittman do not match the excellent acting, costumes, and special effects. They are all serviceable, pleasant to hear as the characters sing them, but they do not fly out of the theater with you. As I started to write this review there is not one of the tunes that I could recall, hence an Internet trip to listen again to the lullaby-like “Where the Lost Things Go” that Mary sings to console the children for the loss of their mother. A nice song, but I suspect that you too will not be able to remember it as well as “Chim Chim Cher-ree” or the one that you can scarcely pronounce, “Supercalifragilisticexpialidocious.”

Despite the above concern, this is a rollicking, fun-filled family film that the whole family can enjoy. When available on video, what a wonderful double feature this could make when paired with the original film. A great way to spend a long winter weekend day with this secular angel that comes when most needed.

In this sequel Mary Poppins returns to London to take charge of a 2nd generation of the Banks family while their father & aunt try to save the family home.
Editor Rating ★★★★★4 out of 5
More Details