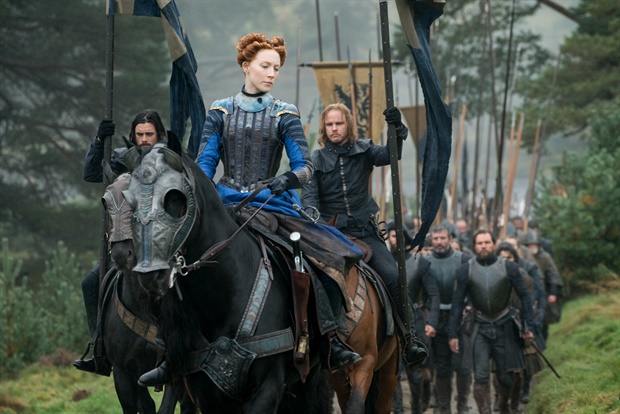 Therefore, you kings, be wise;
be warned, you rulers of the earth.
Serve the Lord with fear
and celebrate his rule with trembling.

It seems appropriate that this film about 16th century politics is directed by a woman Josie Rourke because the two main characters are Mary Stuart (Saoirse Ronan), she of the film’s title, and Queen Elizabeth I (Margot Robbie) of England. As you would expect from the title, the film is more sympathetic to Mary than to Elizabeth, though it does allege that the two might have become allies, both of them ruling in a patriarchal age that when most men believed that women were not fit to rule. Mary’s fatal mistake that transformed Elizabeth from a potential ally to an enemy is when she referred to the English queen as her “inferior”—this in a dramatic face to face meeting that never took place.

It would be difficult not to sympathize with Mary, given all the badgering and manipulation by noblemen–and especially their forcing her to witness the murder of her husband who has gotten in the way of their schemes. And there’s the fierce Protestant reformer John Knox, whom she banishes from her presence during the first meeting of her council when she becomes Queen of Scotland. Having studied under John Calvin in Geneva and written a treatise denouncing the idea of a woman ruler, he preaches against her throughout the film.  As depicted here, he is the dour, kill joy Puritan embedded in the public consciousness.

Fortunately, the real Knox, whom some claim is the transformer of Scotland from a savage to a civilized, well-educated people, was a much better person than the scold of this film. But for him, Scotland under Mary would have become a Roman Catholic nation. (Of course, I realize for some this is a tragic fact of history.) The screenwriters make no attempt to go into the complicated religious issues over which the Queen and the Reformer clashed, which for the sake of entertainment one cannot blame them. That’s what Wikipedia and such are for.

I don’t know if the depiction of Mary as an advocate of religious toleration is true.  The film is adapted by Beau Willimon from John Guy’s biography Queen of Scots: The True Life of Mary Stuart, a book allegedly well-researched. Whether or not Mary would have made a wise ruler benefiting the Scots, all certainly do agree that Mary met her death with great courage and dignity.

With the tendency of most people to favor the underdog, it is little wonder that so many accounts of Mary sympathize with her over her rival. In her first time as screen director Josie Rourke has given us two strong women characters, wonderfully portrayed by Saoirse Ronan and Margot Robbie. Mary is depicted not only beautiful but also robust, donning armor and riding with her army during the civil war in Scotland.  After seeing so many films of kings, it is good that the ladies are having their screen time—you watch them clash in the 16th century. There is more. In The Favourite you can enjoy court politics in a queen’s court in the 18th century.

This review is in the January issue of VP along with a set of questions for reflection and/or discussion. If you have found reviews on this site helpful, please consider purchasing a subscription or individual issue in The Store.

Two queens, Mary of Scotland & Elizabeth of England, who might have become allies become enemies amidst the scheming of male nobles.
Editor Rating ★★★★★4 out of 5
More Details