Skip to content
I recorded this on Wednesday, February 29, 2012. Note that at various points some explanatory notes are enclosed in parentheses. To see my review of The Undefeated scroll down the page. 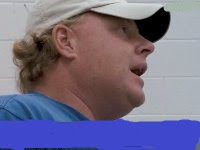