Vanity of vanities, says the Teacher,
vanity of vanities! All is vanity.
…    …
What do mortals get from all the toil and strain with which they toil under the sun? For all their days are full of pain, and their work is a vexation; even at night their minds do not rest. This also is vanity.
Ecclesiastes 1:1, 2:22-23 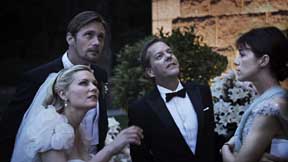 Justine, her new husband, brother-in-law, and her sister
look up at the blue star in the sky.
© 2011 Magnolia Pictures

Note: Toward the end of both the review and the set of questions there are spoilers.

One expects a Lars von Trier film to be a bit weird (remember his Breaking the Waves?), and this new one about the impending end of the world, which won the Palme d’Or and Kirsten Duntz’s “Best Actress Awards at the Cannes Film Festival, is no exception. Somewhat similar to Another Earth, and even Tree of Life, this film reflects the deeply pessimistic view of its auteur. Accompanied by the overture to Wagner’s Tristan und Isolde, it opens with a visual preface consisting of a series of shots of a bride, astronomical shots, the bride floating down a stream that calls to mind a painting we see later, John Everett Millais’ “Ophelia,” and more, all in extreme slow motion. Like a musical overture, we are introduced visually to the story, such as it is, to come.

Part 1 of the film is named after Kirsten Duntz’s character “Justine,” showing in detail the events of an overly lavish wedding reception. Justine (Kirsten Dunst) and groom Michael (Alexander Skarsgard) arrive in a stretch limousine two hours late at the reception held by her sister Claire (Charlotte Gainsbourg) and her husband John (Kiefer Sutherland) at their palatial estate overlooking the sea. Instead of going in to greet the guests, Justine visits her favorite horse in the stables. Although she attempts feeble smiles, she is so depressed that she does not enjoy the festivities, sneaking off to take a bath, then a nap, and later even having sex with a new acquaintance on one of the greens of the estate’s golf course. All this taxes the patience of her sister, and even more her brother-in-law, who keeps reminding Justine of how much the affair has cost him. Thus the marriage is over on the very night that it was to be consummated. Hanging over the events is a bright star that Justine had spotted earlier.

This bright star grows still larger in Part 2 “Claire,” actually dominating it. It is months later, and the star is a planet given the name of Melancholia. It had been hidden by the sun because it had been on the side opposite from the earth, but now it has deviated from its orbit and is moving toward the Earth. Justine, suffering a nervous breakdown, has stayed on at the estate, but it is Claire now whom we see acting strangely, becoming fearful that her amateur astronomer husband’s soothing statement that Melancholia will pass by the Earth is wrong. Each day the planet looms larger in the sky. Claire is anxious that her young son will not be able to grow up and enjoy life as she has. Justine is not much help to Claire, declaring at one point, “The Earth is evil. We don’t need to grieve for it.”

Claire tries to find some measure of comfort and reassurance but Justine dashes that with her statement, “We will all die, and no one will miss us.” And yet it is she who brings a measure of calmness as she gathers Clair and her boy beneath a group of poles stacked tee pee-like to await the End.

Lars von Trier apparently wants us to contemplate the end of our own lives by depicting the end of all life on Earth. What does it amount to? The filmmaker’s use of Pieter Breugel’s painting “The Land of Cockaigne” is a clever device in that the medieval painter was criticizing sharply the overly hedonistic values of his society, one very much like that in which Justine feels enmeshed in. von Trier shows us some people, such as the parents of the sisters (John Hurt and Charlotte Rampling), who are bitter and cynical about life, having failed in their own marriage. Even at the reception their mother criticizes marriage as a useless institution.

Justine’s brother-in-law’s ranting about how much the reception has cost him shows what a hollow materialist he is. And worst of all is Justine’s advertising agency boss (Stellan Skarsgard)) who even at the reception presses her to come up with one of her clever tag lines for their new ad campaign, even offering her a promotion. Just as she rejects marriage by later engaging in sex with the new man her boss has hired, so she ends her career by refusing her boss and telling him how she despises him. Here is a woman who seems to want to end her miserable life, and thus, unlike her fearful sister, is not sorry that the End is at hand.

I have compared the film to Another Earth because the plot of each involves a planet approaching Earth, but in terms of the film’s criticism of the shallow materialism of its characters, Federico Fellini’s La Dolce Vita is a more apt comparison. Lars von Tier is in good company, not just with the Italian filmmaker, but also with the author of the Book of Ecclesiastes in his rejection of society’s values. If only he possessed the faith in the latter’s God who infuses value into our lives as nothing else can. This film might be a hard sell for church groups. It is at times difficult to understand, and its brief sex scene might be off-putting (though it is filmed in a long shot), but it is one that could result in a lively discussion that calls for an in depth examination of our values and of death.

A version of this review with a set of discussion questions will soon be available to VP subscribers at visualparables.net.