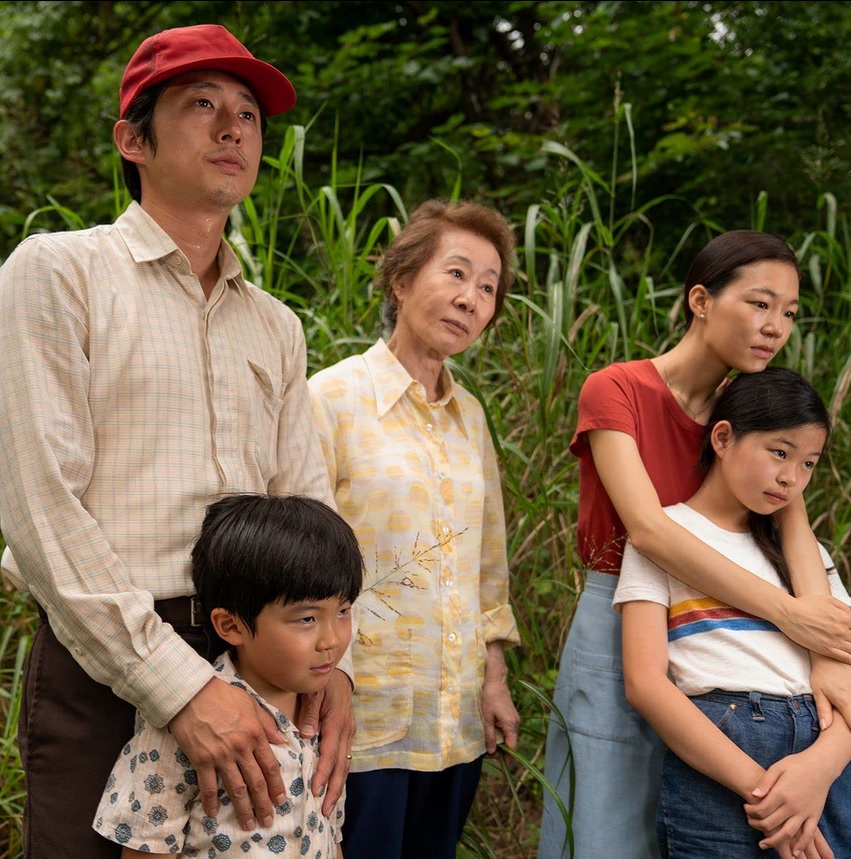 
Hope deferred makes the heart sick,
but a desire fulfilled is a tree of life.

Director Lee Isaac Chung’s story about a Korean immigrant family is a good addition to a genre that has largely ignored Asians. The Yi family is a memorable one, very different from the stoical stereotype.

We join the Yis at the end of their journey from California to rural Arkansas. Jacob Yi (Steven Yeun) and his wife Monica (Yeri Han) had emigrated from Korea together in the early ’70s, but — after almost ten years of eking out a living as chicken sexers in California, Jacob has decided to pursue his dream of farming by buying fifty acres of land in he one place which his meager savings can afford. His optimism as they arrive is matched by Monica’s dismay when she sees that their house “has wheels.” Her initial negativism will continue throughout the film, their new home being so far from any of the city amenities that she craves, especially a large hospital and a large Korean community.

The Yis have two children, pre-teen girl Anne (Noel Cho), and the rambunctious seven-year-old David (Alan S. Kim), who has a hole in his heart, hence his mother’s desire to live closer to a major medical center. In one scene wherein the parents are arguing heatedly the sister and brother quietly fold paper airplanes, write “Stop Fighting” on the wings, and hurl them at the pair.

Jacob and Monica find work at a local chicken processing plant as sexers, with David devoting the rest of his time trying to develop the land. His plan is to specialize in growing “Korean vegetables” for sale in cities where there are large clusters of Koreans. He rejects a water diviner’s offer to find water for the relatively dry land, both because of his skepticism, but even more because of the cost. Jacob negotiates a bank loan, much of the cash invested in the purchase of a used tractor. The deal leads to an unusual friendship with its seller Paul, an eccentric Pentecostal named Paul (Will Patton). He often prays for his new friend, and is liable to start speaking in tongues at unexpected times. He celebrates Sundays by shouldering a large cross and marching down a rural lane.

Jacob is not especially religious, but to assimilate with their new neighbors, the family does attend church on a Sunday, where the pastor embarrasses them by asking them to stand up for a welcoming round of applause. During the following social hour the members unwittingly insult them, one boy asking why David’s face is flat, but then also inviting him for a sleepover. There is good will in the congregation’s attempt to welcome the newcomers, but their clueless efforts actually repel the parents.

Relations between Jacob and Monica continue to deteriorate. He hopes matters will improve by bringing her mother Soonja (Yuh-Jung Youn) from the old country to help take care of the children. When David first meets her, he remarks that she does not look like a Grandma. She takes this as a compliment , but this is not his intention. She does not cook or bake cookies as he assumes all grandmothers do, so his dislike grows, the boy often acting hostilely toward her. Grandma absorbs all of his barbs, responding in love and concern—in one scene she tenderly bandages a wound. It is she who provides the film’s title when she accompanies David to a little stream and plants the minari seeds she has brought from Korea. She tells him that it will grow well there and can be used for many things, including food and a healing balm.

Relations between Jacob and Monica become even more strained, with Jacob even admitting during one argument that the farm and money take precedence over the family. There are crises, one being their running out of water; another, when their Dallas buyer cancels his order at the last minute. Even on a glorious trip to the city when they receive double good news, about David and a new buyer, tragedy strikes—not death, but still stark. But this seems to reset Jacob’s priorities, as well as Monica’s, the film ending on a thin ray of hope.

The troubled Yi family attempt a new start on a farm in Arkansas, with the wife skeptical & the husband hopeful of raising Korean vegetables.
Editor Rating ★★★★★4 out of 5
More Details