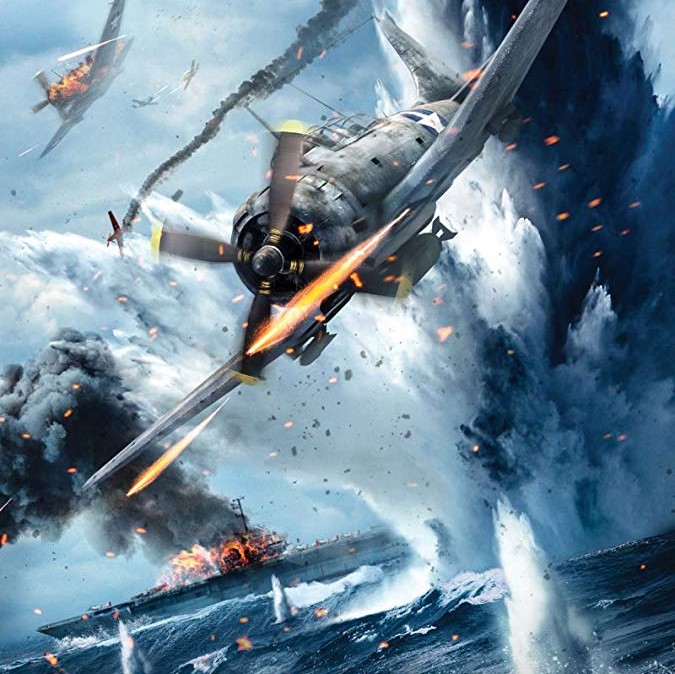 Proclaim this among the nations:
Prepare war
stir up the warriors.
Let all the soldiers draw near,
let them come up.
Beat your plowshares into swords,
and your pruning hooks into spears;
let the weakling say, “I am a warrior.”

Let me start by saying that director Roland Emmerich’s chronicle of the pivotal WW 2 naval battle is far better than what many critics have claimed. (I was almost angered when one jaded critic used forms of “bored” three different times. Anyone bored by this exciting film filled with high altitude dogfights and dive bombers hurtling toward ships probably would just yawn if their own pants were set afire.)

Thanks to an even-handed script by Wes Tooke that provides the context of the Battle, we are given a broad look at its scope and a few intimate glimpses of some of the characters. Of the battleship-size cast, the film focuses upon two characters: Edwin Layton (Patrick Wilson), a U.S. intelligence officer, and Lieutenant Dick Best (Ed Skrein), a gung-ho dive-bomber pilot who becomes a squadron leader aboard the aircraft carrier Enterprise. Although the three-day Battle of Midway took place in June, 1942, the film takes us back to 1937 in Tokyo where Layton is a Naval attaché. He talks with the U.S.-educated Admiral Isoroku Yamamoto (Etsushi Toyokawa), the latter desiring to remain at peace with the U.S. He, of course, was not successful, as we see in the Hawaii segment where on December 7, 1941, wave after wave of Japanese bombers and torpedo planes disturb the quiet Sunday morning as their missiles destroy the neatly lined-up American ships in Pearl Harbor. As a little girl watches the distant destruction, her mother Ann Best (Mandy Moore), wife of Dick Best, dashes out of the house to scoop her up and take her to a safer place. Ann will be the sole civilian to appear throughout the film, serving as a supporter of her endangered husband.

Edwin Layton, who had been frustrated because his warnings about a possible attack on Pearl Harbor had been ignored, serves om the staff of Admiral Chester Nimitz (Woody Harrelson). As a member of a code-breaking team, he advises his boss that the Japanese will attack Midway because of its strategic value as an airfield for both sides. Washington is certain that the attack will be elsewhere, so there is a tug of war back and forth, with Nimitz deciding to trust his aide and team. Vice Admiral William ‘Bull’ Halsey (Dennis Quaid), who had led a series of naval raids against the enemy, is plagued with shingles, so he has to retire from duty and seek treatment in a stateside hospital. Also, before the big battle, there is in April Jimmy Doolittle’s famous B-25 raid on Tokyo from the deck of the USS Hornet that so boosted morale and shocked the Japanese, who had been convinced their archipelago was invulnerable to attack, especially as their intelligence had not shown that any American force was within range of Tokyo. Cut from the Americans to the Japanese officials rushing in to escort Emperor Hirohito to a shelter. Though the bombing took just 30-seconds and thus inflicted minor damage, compared to the massive B17 & B29 raids three years later, the raid was a tonic for Americans after the terrible losses at Pearl Harbor just a few months earlier. As planned, due to using up all of their fuel, Doolittle and his men had to bail out over Japanese occupied China. Some were captured, but thanks to the Chinese guerrillas, Doolittle escaped, going on to fight in North Africa and Europe. (The end credits inform us that the Japanese killed an estimated 250,000 Chinese for helping Doolittle and his men to escape.)

Another interesting lead up to the Battle is the Japanese attack on Midway at the time that Lt. Cmdr. John Ford U.S.N.R. and his cameraman was setting up to film the action. Yes, this is the famed Hollywood director John Ford, one of the five ace directors who volunteered their services for the war effort, as chronicled in the fascinating three-part Netflix series Five Came Back. Positioned next to the watchtower, the director finds himself in the midst of the action when Japanese fighters strafe the area.

In the re-creation of the Battle, the filmmakers use all of their CGI skills in giving us at times a panoramic view of the vast fleets of ships and planes, interspersed with up close shots as the gum-chewing Dick best and his fellow pilots brave the in-coming flack as they dive toward the enemy ships. There is no doubting their courage, the air thick with lethal blasts of exploding shells. Many of the planes are hit and crash into the sea, some of the pilots able to parachute out, but many not. In one short episode two downed pilots manage to clamber into their life raft. They spot a vessel steaming toward them, but is it friend or foe?

Thus the film movies back and forth between the Big Picture and the personal, but thankfully downplays the romantic plot that marred the 1976 version. The shots of pilots daring the deadly ack-ack are as thrilling as any I have witnessed, making me marvel at the bravery of those pilots. I like the way in which the enemy is also presented as brave men doing their duty as they understood it. Best example of this is the sequence in which the Japanese commander of one of the damaged aircraft carriers tells his assembled officers that they must abandon ship so it can be scuttled, but that he intends to stay and go down with the ship. His aide asks to remain with him, and he grants permission. Another officer also wants to stay, but the captain tells him he must go with the crew. There is no way that such a scene would have been included in the war films that I saw as a boy!

The film was released on Veterans Day, very appropriately, as it is a fine tribute to their courage and sacrifice.

The story of WW 2 Battle of Midway is realistically depicted , mainly from the side of the US heroes, but also with numerous respectful scenes of the Japanese officers.
Editor Rating ★★★★★4.5 out of 5
More Details