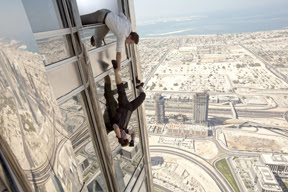 Our hero dangles high above the streets of Dubai.
© 2011 Paramount Pictures

This is a film that shows nothing is impossible if you have vast funds for computer generated effects and a public willing to believe anything—implausible plot devices and a hero able to withstand crushing blows to the head and falls and jumps from great heights that would injure or kill ordinary humans. The most enjoyable part of the film is its use of scenic locales—Moscow, Mumbai, and especially Dubai with its world’s tallest skyscraper piercing the sky like a giant needle.

Our team of heroes is racing to prevent a rogue terrorist from starting a nuclear exchange between Russia and the US that will draw the whole world into destruction. Action fans, who never seem to tire of watching the same plot but with different titles, will get their money’s worth here. Others might wait until it comes out on TV and DVD—no, make that at a cheap seat theater, because the scenery and skyscraper scenes really should be seen on a theater screen.

The main interest to some could be that this is director Brad Bird’s first live action film, his previous work being in animatios—I loved his Iron Giant, The Incredibles and Ratatouille.  Because it’s such a cream puff of a film I am not going to the work of finding a relevant Scripture nor a set of discussion questions.