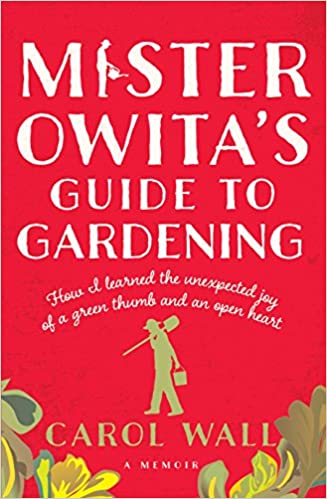 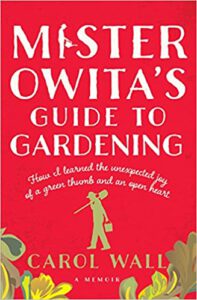 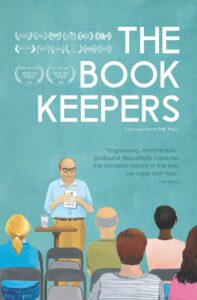 I became interested in reading this book while reviewing the documentary film The Book Keepers. The book is a memoir of an unusual friendship between a white Southern woman, Carol Wall, and Giles Owita, a Kenyan holding several jobs, including gardener. Ms. Wall, a writer for 20 years for Southern Living magazine had struggled with the final editing of her book because she was also fighting a losing battle against Stage IV breast cancer. The book was published in 2014, and the author died shortly afterward.

The film tells the compelling story of how husband Dick, who had greatly assisted Carol during the editing process, agreed to hit the road in a nationwide tour to promote the book. Son Phil accompanied him, his camera catching many heart-warming details of their road trip. The film reveals just a few details of the book, so I was very curious to find out more about it. It turns out that the book is as compelling as the film. It more than justifies Dick’s and Phil’s labors in bringing the book to a wider public view.

Carol was an English teacher more interested in her work as a writer than as a house keeper, especially of the yard, which she freely admits was headed toward being the worst looking one in the neighborhood. When she asked her neighbor with a lovely yard and garden who might help her improve the lawn, the woman suggested Giles Owita. The Kenyan worked at the local garden and lawn store and bagged groceries at a supermarket.  He agreed to come by, and soon began to appear periodically, bringing plants and flowers. Sometimes he went against her wishes, such as refusing to uproot some azaleas she detested. In the end, his choices always turned out better than she could have imagined. He even led her into assisting in some of the work. Over a period of months Mr. Owita transformed her once ugly yard into a show place.

He also transferred her inner life by his patience and wisdom. Because of a long ago loss of a sister Carol did not even like flowers, but Giles unveils their beauty to her, even of azaleas. She was surprised that in Kenya he had been a college professor trained in horticulture and his wife a nurse. They had emigrated to the USA to improve their lives but had been forced to leave a young daughter behind with their family. Giles had not been able to secure a college appointment, hence his working at less prestigious jobs. He is not sure his failure is due to his color or his accent, but he refuses to become embittered.

As the book progresses the lives of the two families impinge more and more, with the Walls joining others in helping the Owitas weather a financial crisis. Giles schedule often brings him by when Carol is away, so they start what becomes a long chain of notes and letters that they leave for each other.  Both Carol and Giles have secrets which slowly emerge, with a surprising denouement of their story.

Giles’ calm acceptance of the downside as well as the joys and beauty of life lifts Carol up out of her own pain and despair. She adopts his outlook, closing her book with his words, “Every day brings something good!” I am certain you will feel the same way after reading this charmer.