This is the second of what will be three posts on Nelson Mandela. I know, there has been so much on him, but there is so much good material available, that I hope you are not tired of hearing about him. This time I want to bring to your attention in case you are like me and missed the PBS “Front Line” 2 hour special on the leader “The Long Walk of Nelson Mandela”: 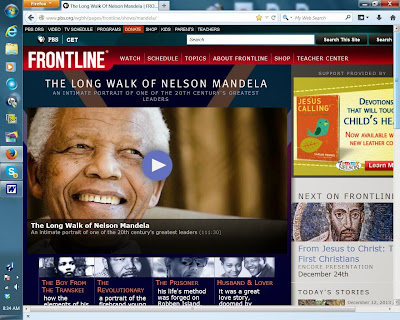 It’s available in its entirety at: http://www.pbs.org/wgbh/pages/frontline/shows/mandela/ . I don’t know how long PBS will make this accessible, so I suggest that you go and watch it soon,

The documentary begins with his youthful rebellion against his tribal chief  and on through his early days as a student and then an activist after meeting and coming under the influence of Walter Sisulu and on through his incarceration, release, sad divorce from Winnie, and his remarriage during his presidency. Along with the video you can also read material below it about aspects of his life. Embedded in these are some short videos. Quite a treasure trove of information!

One glaring omission, however–at least in what I’ve read thus far–is any discussion of the man in the ANC who opposed Mandela’s resorting to violence, Chief Albert Luthuli, then the head of the ANC. Nor have I heard or seen him mentioned in the many other TV/cable tributes to Mandela. This is a glaring omission in that Chief Luthuli received the Nobel Peace Prize in 1960 for his advocacy of non-violence against the apartheid regime and his persecution and imprisonment by the authorities. He was the first non-Euroean or American to be so honored, quite a precdent for that time. More on him next time.

I also will be bringing to your attention a DVD that I discovered I had bought a long time ago–one of almost 60 that I knew nothing about but which was appealing, either because of subject matter or their actors or director. This one is The Color of Freedom, the story of a racist guard who watched over Mandela for 20 years and moved from racist to admirer. It stars Joseph Fiennes as the guard and Dennis Haysbert  as Mandela. I tried to find out about it at the Imdb, but there was no listing, something very puzzling, that site suposedly having every film ever released in its databank. 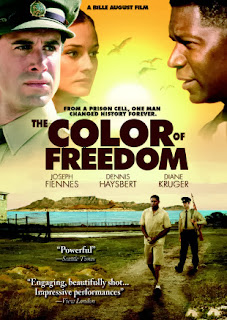 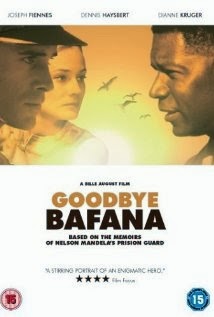 Then good old Google came to the rescue by revealing that it was known elsewhere as Goodbye Bafana. I plan on seeing this tonight, so will include it in the next posting, as well as reviewing it for Visual Parables at visualparables.org. I don’t know whether this is the same person featured in the about to be released Mandela: Long Walk to Freedom. We shall see,

Also one of the issues I want to raise in the third installment is Nelson Mandela’s giving up on non-violence, as I believe this was a sad mistake that set back the cause of South African freedom rather than advancing it.