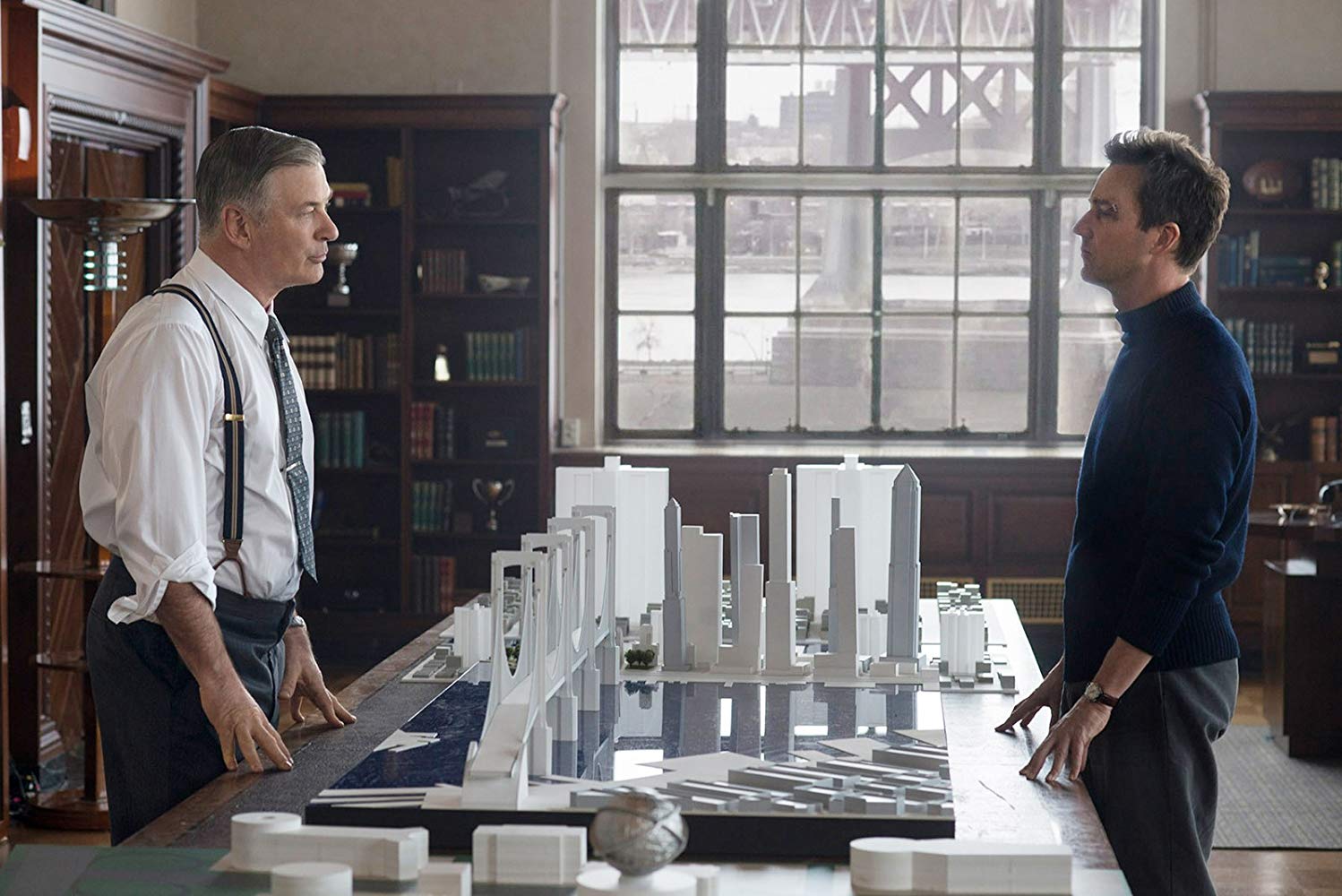 When the ear heard, it commended me,
and when the eye saw, it approved;
because I delivered the poor who cried,
and the orphan who had no helper.

Edward Norton is a triple threat in his new movie. He is director, writer, and star in this adaptation (very loosely) of Jonathan Lethem’s acclaimed 1999 novel. However, he made a lot of changes, beginning by moving the action back 40 years—from the 1990s to 1957, and thus into film noir territory, though not entirely, the film ending far better for our protagonist than do classic film noirs. Norton’s revisioning the book injects a strong note of social justice into the crime story, with one character promoting urban planning projects that callously disrupt the lives of thousands of New York’s black and brown citizens. The citizen protest scenes confronting this person reminded me of the excellent documentary Citizen Jane: Battle for the City. More on this later.

Norton plays a very unusual private detective, Lionel Essrog, who is devoted to his boss Frank Minna (Bruce Willis, in what amounts to a cameo role). Essrog is afflicted with Tourette syndrome, which causes unexpected tics and embarrassing outbursts of cries or inappropriate words. “It’s like I got glass in my brain,” Lionel complains more than once. Well he might, with some calling him “Freakshow.”

Serving as the film’s narrator, Lionel informs us that he was saved from perpetual rejection by Minna when the latter took him out of an orphanage when he was 12 years old. Frank had seen that the boy’s near photographic memory would be valuable in his detective work. Thus, the film’s title is actually the orphan’s nickname. Because of Frank the other men at the agency, Gilbert (Ethan Suplee) and Tony (Bobby Cannavale), also accept Lionel as a colleague and overlook his annoying peculiarities.

The action starts when Frank is kidnapped and murdered after meeting with several sinister-looking men in a seedy vacant apartment. Lionel and a colleague had been instructed to stay close by as back-ups but are powerless to save their boss or catch the murderers. The grief-stricken Lionel sets out to find out the identity of the murderers and to avenge his mentor. His main clues are words he was able to hear his boss say over an open telephone Minna had hidden in a drawer just before talking with the goons—the word “Formosa” and something about a “colored girl.” Lionel literally puts on his mentor’s hat and coat when he sets out on his mission: a good thing, as you will see. Thanks to a match folder in Frank’s coat pocket, Lionel’s trek will take him to a Harlem jazz club named The King Rooster and an urban palace of power. In Harlem he will meet the mysterious beauty whom he had spotted in connection with Frank, community activist Laura Rose (Gugu Mbatha-Raw). And at first at a distance when he sits at the back of a Council meeting, but soon up close, he encounters Moses Randolph (Alec Baldwin), a character I understand is not in the novel, but whom Norton makes central in the film, indeed, practically turning the work into a study of arrogance and abuse that has great relevance for today—though not intentionally so, Norton pointing out he has been working on the film project for 19 years.

Some have compared the film to Chinatown, which especially in mood and the glimpse into urban power brokers, is appropriate. Moses Randolph‘s nature is foreshadowed by an unattributed Shakespeare quotation we see at the beginning of the film, “Oh it’s excellent to have a giant’s strength, but it’s tyrannous to use it like a giant.” This describes well the real Robert Moses, who strove to transform New York City during the 40s and 50s according to his automobile-favoring vision of building freeways through crowded urban areas without heeding the immense disruption of lives. He also promoted high rises that made it impossible for the residents to continue their lively street relationships they had cherished. It is his battle with activist Jane Jacobs over a development that would have destroyed the beloved Washington Square Park that is chronicled in the documentary mentioned earlier, Citizen Jane. Although I have found no confirmation of it, I believe that Laura’s fellow activist Gabby Horowitz, whom we see several times speaking forcefully against Moses Randolph, is based on the Jane Jacobs of that film. This character is played by Cherry Jones*, my favorite Broadway actress who takes on movie cameos when the film is shot in the New York City area. In her make-up and glasses, she even looks like Jacobs.

Posing as the Times reporter whose “Press” hat tab he has stolen, Lionel talks with Laura Rose. His investigation takes him to the Harlem bar above which she lives. “You come off weird, but you’re sweet,” she tells him as their relationship evolves through several twists and turns, some of which are dangerous. True to the film noir form, Lionel does get knocked about. At the night spot, in one of the film’s most memorable scenes, the syncopated jazz music connects with his damaged brain, causing him to react in audible comments and body tics that upset some of the patrons. These bar scenes introduce two delightful African American characters, “Trumpet Man” played by Michael K. Williams, and Billy Rose, a World War II veteran, owner of the club and Laura’s father, played by Robert Wisdom. Still another character Lionel crosses path with is Paul Randolph (Willem Dafoe), the embittered brother of Randolph who seems to be lurking about wherever Moses shows up. As I recall, he is the one who says of Moses that he is “the hero of the people who hates people.”

Alec Baldwin must have had a ball playing the power broker who has more influence than even the Mayor. Indeed, he seems to regard His Honor almost as a lackey. Besides his position as Park Commissioner, Moses holds 13 other city appointments! Young viewers will probably think “Donald Trump” when they first see Baldwin because of his portrayals on Saturday Night Live, but due to the Fifties setting, there can be no doubt of the identity of its target. When Lionel and Moses face each other, first at his huge office filled with models of his future projects and then in a huge public bath, Moses’ monologue on power is a classic example of hubris and vanity. Accused of not caring for the black and the brown people uprooted by his “slum clearance” projects, he justifies the mass disruptions by pointing out that when Frederick Olmstead’s Central Park was built a century earlier, many farmers were similarly uprooted. Although public announcements about his developments had promised displaced persons help in resettling, nothing was ever done, and Moses displays no sympathy for their plight.

The way in which Lionel solves the mystery of his mentor’s murder and settles into a secluded future with Laura takes the film out of film noir territory into that of the romance film. Most people probably will be satisfied with this, even though the fate of the power baron is unresolved. But maybe this “and they lived happily” romantic ending is more realistic than the superhero defeats evil villain kind of film. Sometimes in life the best we can do in the fight against entrenched evil is to keep it at bay—though by what Lionel sends to the reporter whose press identity he had borrowed does suggest that maybe justice will win out. That the reporter works for the Times makes me think of the up in the air ending of Three Days of the Condor which takes place outside the Times building.

Visually, Motherless Brooklyn is pleasing, unlike the film noirs of old, shot in color by cinematographer Dick Pope rather than stark black and white. I loved the night shots of the Brooklyn Bridge with lights arcing up its main supporting cables. The shot in which at ground level we are looking through its arches, also a night shot and thus the misty color being monochromatic, would look great framed on a wall. The period details are spot on. Car lovers will have fun naming the various brands sitting at the curbs. With all this and its meaty theme, I think you will agree that Edward Norton’s 19-year effort to bring the story to the big screen is well worth the struggle.

*See my article about my evening with Cherry Jones in the Blog section.

Grieving over the murder of his mentor, the dead P.I.'s assistant ,afflicted by Tourette syndrome searches for the killers, eventually confronting the most powerful man in New York City.
Editor Rating ★★★★★5 out of 5
More Details