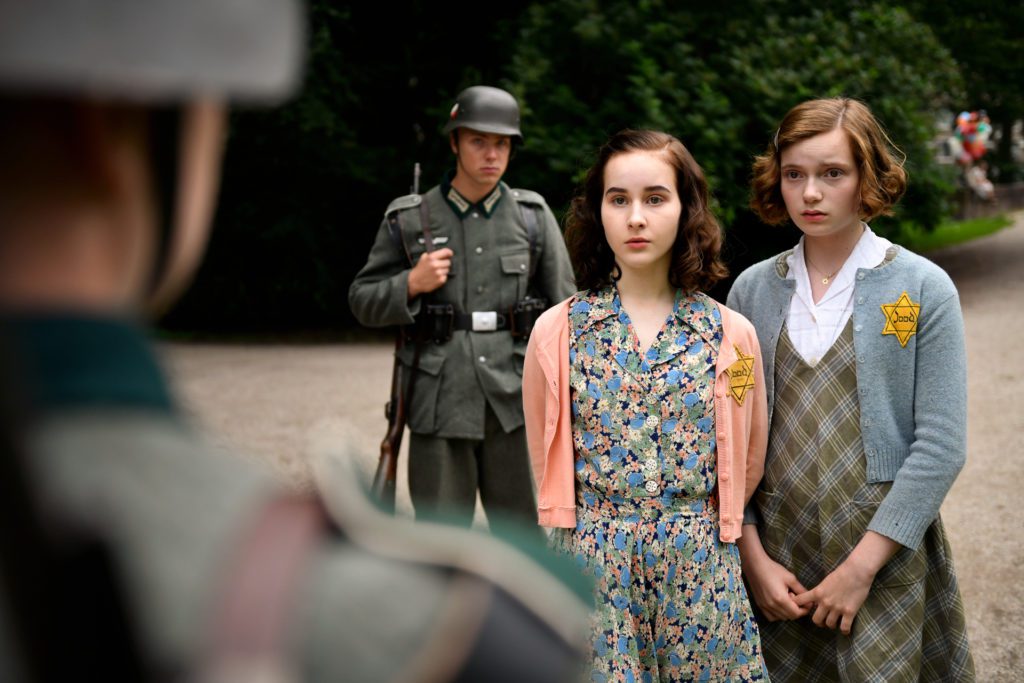 Dutch filmmaker Ben Sombogaart enlarges our knowledge and appreciation of the beloved Anne Frank in this new film, reportedly a hit in the Netherlands. Based on the book Memories of Anne Frank: Reflections of a Childhood Friend by Alison Leslie Gold, it tells the story of the friendship between Anne and Hanneli Goslar from 1942 to 1945.

Assuming that we already know the story of the Frank family’s hiding in the Annex of their office building, we see the two friends together in the events leading up to their disappearance and then a longer segment about Hannah’s incarceration at Bergen-Belsen where she again is able to contacts her friend who is in a section of the camp separated from her by a high wall made of straw. The film constantly moves back and forth from the brightly lit streets of Amsterdam to the dreary dormitories and yards of the concentration camp.

Anne Frank (Aiko Beemsterboer) and Hannah Goslar (Josephine Arendsen) attend the same school and try to make the best of their circumstances, with Nazi soldiers occupying Amsterdam. Hannah wears braces and still does not know “how a baby gets inside its mother.” She resents having to take care of her infant sister Gabi because of her pregnant mother’s bouts of illness. Apparently the Goslars are of German extraction because Mrs. Goslar sometimes speaks to her daughter in German as well as in Dutch. Knowing German will later become very handy for Hannah.

The friends often talk about boys and “French kisses,” each with her eye on a particular lad. They look forward to growing breasts as they chatter away. They sneak off with a boy interested in one of them to see a film at a theater forbidden to Jews. They still pretend with Anne’s childhood set of teacups and dishes to be dining and toasting one another as they talk about future plans Anne’s to become a famous writer and Hannah to become a nurse (though the sight of blood bothers her). They promise never to leave one another—and yet, like all adolescents, they sometimes become upset with one another. Anne in particular seems at times to be insensitive to her friend, not taking her side, for instance, when the older Margot Frank taunts her.

They play hide and seek at the Frank house where Otto Frank has told his daughter not to go into the annex, the door to which sometimes is left open. However, one of those rare times the two do go upstairs and explore the rooms. On one occasion Hannah notices that one room contains some of Anne’s things. The Franks say that they plan to emigrate to Switzerland when they can obtain papers, and the promise is made to take Hannah with them. Mr. Goslar at first resists but is persuaded to agree with Mr. Frank.

Hannah’s father also had hoped to move his family to Switzerland but was unsuccessful at obtaining papers. He assures Hannah, worried because she has witnessed the cruel deportation of a friend and her family, that they are safe from the roundups because he has a letter certifying that his pregnant wife is too ill, which proves true when the Dutch police conduct another roundup and almost take the Goslars with them.  However, Hannah’s hopes of going to Switzerland with the Franks are dashed on the July day in 1942 when she goes to the Franks’ house and is told that they have left already.

Hannah is hurt first that she is left behind and then because she is separated from her best friend—and they had just quarreled and not made up. Hannah’s mother tries to reassure her that Anne will write her a letter. However, there is no time for this, because Mother soon goes into labor and, while Hannah is sent out into the night in a vain attempt to find a doctor, the woman dies. The father and daughter light the candles and say the prayers for the dead. Before long the three are arrested and sent to Bergen-Belsen where the girls are sent into a women’s dorm. Dahlia, a Hungarian prisoner who speaks German, often takes charge of little Gabi, with the little tyke often expressing her hunger. There is a second Hungarian named Eva, head of the women in the dorm, but she speaks only her native language. Hannah develops a dislike for her because she is so demanding and seemingly harsh. It will be up to Eva to set the girl straight about this.

Hannah is able one night by whistling and quiet speech to make contact over the high wall, but it is not Anne who responds. A little later Hannah tries again, and evidently the woman had passed word along. The answering voice is Anne’s, but their conversation has to be brief. Hannah mainly learns that her best friend is being starved, and so her anxiety to do something increases. Even more so when told the good news that she, Gabi and her father are to be traded for one German soldier. Freedom is at hand for them!

They will soon be in Switzerland after all. But for Hannah this is not good news, with her friend left behind to starve. She says that she will not go, which puzzles the women. On a visit to her father, now a weakened patient in the hospital, she steals a parcel of food, and then…

The prison scenes are grim, with little held back in depicting Nazi hatred and brutal treatment of prisoners. And yet, as in Schindler’s List, there are numerous moments of kindness, what I like to call “moments of grace.” When made to join the other women in their forced labor of making handles from cellophane for carrier bags, Hannah even leads in a playful song. Hannah learns from Dahlia how the woman she dislikes has been a person of grace. Most touching of all, however, is Hannah’s dedication to Anne. The powerful scene of loyal friendship when she is able to tear a hole in the straw wall so she can see her dear friend eating from the parcel she has tossed over the wall—this is deeply moving. We know sadly that it will not be enough to save her friend, but at least for a brief moment the two share a touch of joy.

Mr. Goslar is a man of faith, commenting stoically when denied emigration papers that this is a part of God’s plan. He urges his daughter to “have faith.” When Mrs. Goslar dies, he and Hannah light candles and offer prayers. Other than this there is no attempt by anyone to “justify” God in the light of the horrors overtaking the Jews and those who might try to help them. (None of the latter is shown in this film, though we know from other films that there were.) If Hannah prayed in the concentration camp, it is not shown in the film. Yet she endured, sustained I think by her hope of reconnecting with her friend and being able to help her in a small way.

It is hard to believe that this is the first Dutch film dealing with the life of Anne Frank, considered now a national heroine. It is true that this film is really about the girls’ friendship rather than Anne—everything is shown from Hannah’s perspective—but I found it in no way exploitive of Anne Frank’s fame. Even if the friend on the other side of the wall had not been world famous, the story of a friendship despite everything deserves to be celebrated. The two actresses playing the girls are captivating, both showing the humanity of teenagers under pressure. Conditions around them in Amsterdam are horrible, but they are teenagers, still concerned about boys, sisters, experimenting with make-up, and pushing against parental authority. Anne is not a stained-glass saint but can be impetuous and at times unfeeling in regard to her friend.

This is another film that by itself makes the Netflix subscription price a bargain, even with its new increase. Many scenes contain too much brutality for young viewers, but families

The friendship of Hannah Goslar & Anne Frank is depicted, from their days together in Amsterdam during the Nazi occupation to the prison camp.
More Details