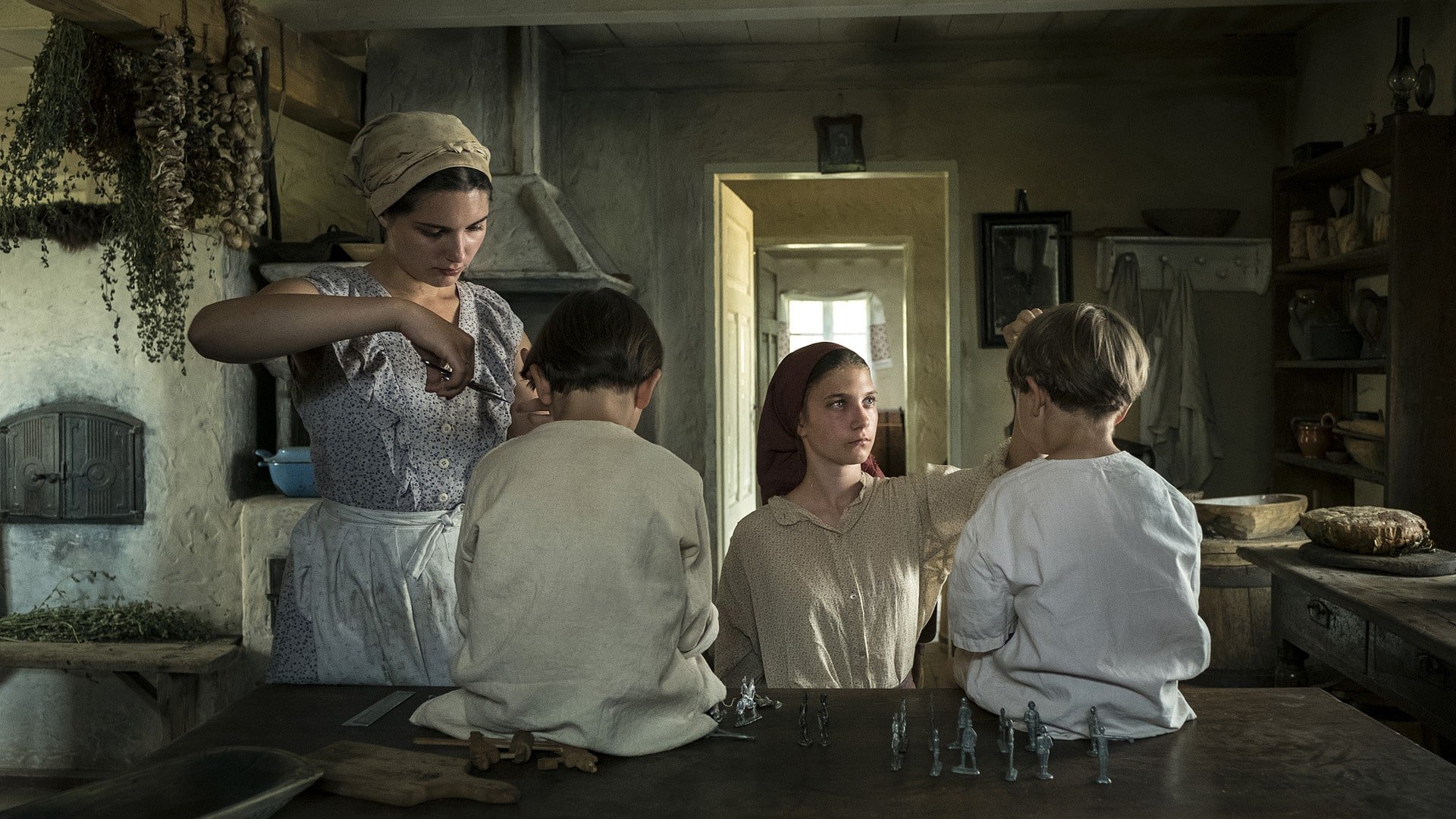 In English, and Polish, German and Ukrainian with English subtitles

Director Steven Oritt and co-writer  David Himmelstein’s Holocaust survivor film is a bit different from the many in which sympathetic Gentiles hide or help Jews being hunted by Nazis to escape. But what if those to whom you turn are themselves anti-Semites? That is the situation that confronts our Jewish heroine in this latest addition to the Holocaust genre.

In 1942 13-year-old Sara Góralnik (Zuzanna Surowy) and her older brother Moishe (Konrad Cichon) are sent away by their parents from their Ukrainian village of Koretz to escape the coming round-up of Jews by their Nazi occupiers. They have paid a woman in another village to take them in, but the woman becomes fearful and refuses to harbor them. Out in the forest Moishe suggests that she would be better off if they split up because she, unlike he, does not look Jewish. Sara disagrees, but early in the morning she has rethought matters, and so slips away. Trudging through the forest she eventually comes across a peasant family out working in their field. They are , Pavlo (Eryk Lubos), his wife, Nadya (Michalina Olszanska) and two young boys. The first question of the suspicious farmer is “Are you a Jew?” Sara denies the charge (it really wasn’t a question), replying that her name is Manya, actually that of her best friend back home. She spins a story of having to run away because of a cruel stepmother. Fortunately, her Christian friend had shown her how to make the sign of the cross and taught her some other rudiments of the faith, so when Nadya tests her, the couple’s suspicions are laid to rest. Pavlov agrees to hire her on—no pay, just meals and shelter in the barn.

Thus begins Sara’s, or Manya’s, life as a nanny and farm worker. She must guard against Pavlo’s numerous lustful looks and Nadya’s surly, hostile attitude toward her as an intruder. The boys, however, welcome her and her attention eagerly. She eats her meals with the family and retires to the barn to sleep in its loft. She accompanies the family to the Orthodox church and during its weekly excursion into town. Paylo must deliver a specified amount of grain and produce to the Nazis. They also sell in the market, one encounter when a Nazi officer haggles over the price and another draws his pistol and threatens to shoot the farmer. He barely is able to talk and bribe his way out of what could have been a fatal confrontation.

Sara discovers that Nadya had been forced to marry Pavlov but still loves her old boyfriend and sneaks off for trysts with him whenever possible, such as during the family visits to town. One more secret for the girl to keep. When the family takes pity on her during the winter and invite her to sleep in the house, she places a folded cloth inside her mouth to prevent her from crying out or talking in her sleep. Jew-hatred is ever present, even in a merry New Years Eve celebration where families, many of them wearing special costumes, dance and parade through the village. One of the costumed characters is dressed as a stereotypical Jew who is ceremoniously cast out of the house. At another time, when the family is returning in their horse cart from the village they have to pass beneath the bodies of peasants hung from a tree, a sign pinned to them declaring that they had hid Jews.

The farm family is caught between the demands of the Nazi occupiers and the Soviet partisans. The former come out from the village in the daytime to seize food and livestock, and the latter ride in from the forest at night to demand that Pavlov give up the meat from his slaughtered animals. The partisans are almost as brutal as the Germans, beating Pavlov when at first he refuses to admit that he has any meat. Sara cries out when he is about to be shot, revealing its hiding place amidst a bed of straw. This earns her Nadya’s scorn.

This is a powerful story well told by all involved. It is hard to believe that Zuzanna Surowy has never acted in a film before, so convincing is she as the vulnerable teenager who grows in stature as her ordeals mount. This is well shown in the two scenes when she is sent out to check the trap which Pavlov keeps set to capture rabbits to supplement their dwindling supply of meat. In the first scene the girl lifts up a rock to finish off the furry little beast, but she cannot kill it. A couple of years later she has seen so much bloodshed, and been threatened enough with it, that she raises the rock, hesitates slightly, and brings it down on the rabbit’s head. (Don’t worry, we just hear the crunch but do not see the blow.)

Based on the life of a real person, this is an unsentimental film about a survivor. Like numerous “true stories,” we are shown photos at the end of the real persons. Also of interest, the press notes reveal that the film’s executive producer Mickey Shapiro is the son of Sara Góralniak. We should be grateful that he has worked so hard to share with us, and thus honor, this young woman who refused to give up during Europe’s darkest hour. This is a film that will linger long in your memory, especially the almost underplayed scene of Father Oleksa’s self sacrifice.

The true story of a Jewish teenager who finds shelter with an anti-Semitic Ukrainian family during the Nazi holocaust by keeping her identity secret.
Editor Rating ★★★★★5 out of 5
More Details