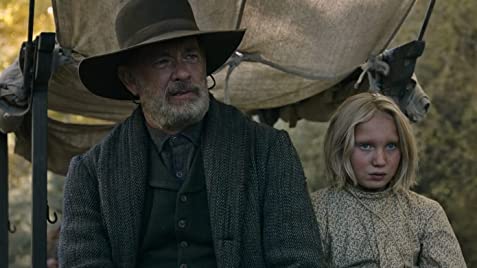 Like Unforgiven, Paul Greengrass’ News of the World is an unconventional Western. Oh, there is are sections of violent gun play, but these are secondary to other themes, such as human relationships, the need for belonging, and the importance of “news” for connection to a world larger than our own narrow existence. Adapted by director and Luke Davies from the 2016 novel by Paulette Jiles, the film provides Tom Hanks with a great opportunity to display his acting ability, an opportunity of which he takes full advantage! It also introduces many of us to a delightful young German actress Helena Zengel.

Capt. Jefferson Kyle Kidd (Hanks) was a Confederate soldier from Texas. After his wife died he took up a nomadic life, earning a living by entering a small town and holding meetings at which he reads for the illiterate townspeople stories from various newspapers. The people are starved for both news and entertainment, of which Kidd provides both, embellishing some of the stories with details that add an emotional touch to the story. News of the 13th, 14th, and 15th Amendments to the Constitutions are met with hoots and other expressions of disapproval. Out in the streets we also see their displeasure over the presence of Federal troops, stationed there to keep their prejudice in check.

Some of the scenes of Kidd’s public readings might remind viewers of the opening scene of The Man Who Invented Christmas in which Charles Dickens reads from his works to an enraptured New York City audience. It is 1870, just five years since the Confederates were defeated, but their prejudices remain embedded in their hearts and souls, as Kidd discovers early on. Not only is there hatred for the freed slaves but fighting continues between the white newcomers and the Native Americans over the land. One of Kidd’s news stories reports that a railroad is being built to Texas that will pass through Indian territory. No doubt this act is as distasteful to Native Americans as it is favorable to Kidd’s audience. There is also news of a plague—is this, along with the division over race, and the emphasis on the importance of news, an attempt at relevance?

Coming across an overturned wagon, its horses long gone, Kidd follows a trail of blood and sees the body of a lynched Black trooper hanging from a tree. A note declares, “Texas Says No! This is White Man’s Country.” He hears movement in the bush and chases down a young blond girl clad in buckskins. A document that he finds in the wagon reveals that the girl was being forcibly taken by the trooper to live with her aunt and uncle on their farm near San Antonio. Kidd thinks that her name is Johanna. The girl herself seems to know no English, speaking instead in Kiowa.  A squad of Union soldiers stop to inquire what has happened but decline to take the girl in custody. The officer in charge says he should take the girl to the Indian Agency at Red River. In town the boarding house proprietor Mrs. Gannett (Elizabeth Marvel)  understands a little Kiowa. She learns the basic facts of the girl’s story, telling Kidd that the girl is an orphan taken by a raiding party six years earlier when they killed her German immigrant parents.

An attempt of three sinister men to buy the girl from Kidd leads to the most violent episode of the film when the three follow the trail of the wagon and attempt to seize their prize–though a later one in which Johanna saves Kidd’s life is also violent. The sights along the way back to San Antonio are revelatory of the harsh times. There is a camp where dozens of buffalo carcasses have been stripped of their hides and hundreds of men are busy tanning and cleaning them. A small town is controlled by a cruel boss named Merritt Farley (Thomas Francis Murphy) who demands that Kidd read aloud the newspaper he has had printed as a puff piece, rather than news from a legitimate paper. Kidd masterfully handles this by getting the crowd on his side and thus supportive of what he wants to read. This leads to a deadly showdown, one which will also liberate one of the boss’s supporters.

At the heart of this period drama is the growing relationship between the almost burnt out man and orphaned girl. Both have been deprived of family, and thus are deeply wounded. As with so many of his characters, Tom Hank’s Kidd is a decent, compassionate man, setting him apart from most other Confederates with whom he had fought along. We see this early on when he buries the lynched Black soldier, rather than riding away from the tree with its “strange fruit.” He could have left his charge back in Wichita Falls when it became obvious Johanna would never fit in there.

Likewise, Johanna at one point could have left her benefactor and rejoined the Kiowa who had raised her. This is following a deadly sandstorm from which they might have perished because they had lost their horse. But thy encounter a band of Kiowa that apparently is leaving their land, forced out by the policy of the state. From them they receive a replacement so they can continue their journey. There is no dialogue in this sequence, and none is needed.

Kidd does find the girl’s aunt and uncle at last, but witnesses no warmth or compassion, just family obligation, as they grudgingly take custody of her. In San Antonio he tends to business and seems to find some closure as he visits his wife’s grave. And then…

This is a film that will stay with you for a long time, especially if you devote some time and effort to think beyond its mere entertainment value. The very title out to resonate with the strong attack on the conveyors of the “news of the world.” In this country a large portion of citizens have been convinced by charges of “fake news” and that reporters are “the scum of the earth,” indeed, “The Enemy of the people”! Abroad, journalists have been killed for writing the facts rather than serving as propagandists for a government. “Of the World” is an important component, because it expands the horizons of its recipients. As we see in the film, even the ignorant, prejudiced denizens of the Texas small towns in which Kidd offers his readings are hungry to hear what is transpiring elsewhere. Despite their flaws, news papers, and today other forms of media, are our lifelines widening our narrow little worlds.

People of faith will appreciate that Kidd, whatever his personal beliefs, is an agent of the divine. From Exodus through the Letter of James we see that God has a special concern for outsiders, orphans in particular. Indeed, in his opening chapter James wrote (v. 26), “Religion that is pure and undefiled before God, the Father, is this: to care for orphans and widows in their distress, and to keep oneself unstained by the world.” Thus Capt. Jefferson Kyle Kidd, who probably does not think of himself as a religious man, is certainly a spiritual agent. Whatever the future holds for him and his young charge in that troubled land, they will face it together. Each as what the other needs, love and trust, qualities that are at the core of what constitutes a family.

This review will be in the January y issue of  VP along with a set of questions for reflection and/or discussion. If you have found reviews on this site helpful, please consider purchasing a subscription or individual issue in The Store.

While returning an orphaned girl raised by Native Americans to her family a Civil War veteran runs into problems in racist Texas.
Editor Rating ★★★★★5 out of 5
More Details