The Egyptians became ruthless in imposing tasks on the Israelites,  and made their lives bitter with hard service in mortar and brick and in every kind of field labour. They were ruthless in all the tasks that they imposed on them. The king of Egypt said to the Hebrew midwives, one of whom was named Shiphrah and the other Puah, “When you act as midwives to the Hebrew women, and see them on the birthstool, if it is a boy, kill him; but if it is a girl, she shall live.” But the midwives feared God; they did not do as the king of Egypt commanded them, but they let the boys live.
Exodus 1:13-17

Those who oppress the poor insult their Maker,
but those who are kind to the needy honour him.
The wicked are overthrown by their evildoing,
but the righteous find a refuge in their integrity.
Proverbs 14:31-32

Although the Hebrew midwives were at the bottom of society in ancient Egypt, they were brave enough to exercise the one power that they did have, the power of saying “No” to Pharaoh’s murderous command. Chilean film director Pablo Larrain’s film claims that an advertising campaign concocted by the same pitchman who was selling a drink called Freedom would also lead to the freedom of his people by convincing them that if enough of them said “No” at an upcoming plebiscite, they could oust the dictator who had destroyed their democracy. 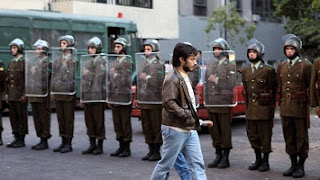 In 1988 the people of Chile had suffered under the harsh military dictatorship of Gen. Augusto Pinochet for 15 years. Thousands of them had been shot and imprisoned for even being suspected of opposing the regime. Pressured by foreign governments, the Pope, human rights groups, and even by the requirement of Pinochet’s own constitution, the General called for an election in which the people had two choices—a “Yes” to continue the dictator in office for 8 more years; a “No” for those who wanted to restore democracy. Pinochet is supremely confident that the people will support an extension of his term of office.
Director Pablo Larrain and screenwriter Pedro Peirano’s film, in turn based on an unpublished play by Antonio Skarmeta, is difficult to watch at first because of its technique. The director used old video cameras to shoot the action so that they blend in more with the actual TV footage of the time that he uses so frequently. More irritating is that in most scenes the cameras are hand-held, providing mostly close ups and medium shots that are jerky and unsettling. However, the story is so engrossing that we get over any irritations, and we marvel at the premise that the creator of cheesy TV commercials could have such a vital role in the ousting of a brutal dictator.

The film begins with René Saavedra (Gael Garcia Bernal) pitching to clients his commercial for their beer, ironically named in view of what will unfold. “Freedom.” They are puzzled by the unorthodox razzle-dazzle approach, especially the use of a mime. He employs advertising jargon from North America to explain to them “the social context” of their product. Rene is very much a member of the new generation, riding his skateboard back and forth to work. Because of his reputation for creativity it is to him that the coalition of opposition parties turn to direct their TV campaign to convince the public to vote “No” in the referendum. The government has given both sides 15 minutes airtime to make their case during the 4 weeks of the campaign.

At first Rene’s former activist wife Veronica (Antonia Zegers), who has left him because she despises his work of selling frivolous products to the wealthy, scorns his freelance campaign because of the widespread belief that the election is rigged. Rene also has to convince the opposition politicians that a light, positive approach is better than a heavy-handed one using scenes of past beatings and imprisonment. They are sceptical, especially when he uses that mime again, and one of the leaders walks out in disgust when Rene shows them his ad. The opposition politicians are convinced that the election is a fraud, so they see it merely as an opportunity to make their case to the people before the government’s iron curtain of censorship descends again. Rene, asking do they want to win the election, convinces them that his campaign can indeed lead to victory by stirring the large group of apolitical TV viewers to go to the polls and vote.

Inspired by the “We Are the World” campaign, Rene hires famous singers to sing a tuneful jingo “Happiness is coming, Chile!” Filled with upbeat images akin to those in Coke commercials, his presentations paint a picture of the bright future that could return to Chile if the people vote “No.” The word is incorporated into a logo that includes a rainbow, the latter representing the 17 opposition parties. Stan Freburg-like humour is employed in skits, such as that of a couple in bed, one of whom continually responds with “No” to her lover’s request. In another a comedian is bombarded with pleas to say “Yes,” but instead opens his mouth on which is pasted to his tongue the rainbow logos and “No.”

Much of the film shows the alternating meetings of the two campaign committees, that of the General’s agents disdaining the opposition’s seemingly frivolous approach, until polls begin to show once inactive members of the public supporting the “No” side. The actual videos of both the “Yes” and the “No” campaigns are interspersed throughout the story. At one meeting the “Yes” committee members complain that all of the talented, best-known artists are working for the other side. Even internationally known Hollywood stars contribute their services—we see the actual ads featuring Jane Fonda, Christopher Reeve, and Richard Dreyfus.

Adding to the tension is the fact that Rene’s ad agency boss Lucho (Alfredo Castro) heads up Pinochet’s campaign. However, Rene is apparently so valuable at the agency that he is not fired over his freelance work. More dangerous are the anonymous phone calls and threats he begins to receive. He becomes so worried that he takes his young son, of whom he has custody, to stay with Veronica—who now regards him with more respect. Matters become so tense that at the end, when a large majority of the people do vote “NO,” Rene and his colleagues fear that the government dictatorship will resort to its old violent tactics and refuse to give up power.

What happens is so surprising and refreshing that Chile should be added to the list of Iron Curtain nations that overthrew their tyranny non-violently, as well as those more recently in North Africa. The overall events are true, but the story is fictional, and according to its critics, very simplistic, leaving out many persons and intense work by other groups that made possible the Chilean revolution. However, as a political movie extolling the power of people saying “No,” the film is a delight. (I kept thinking of Thoreau’s “Essay on Civil Disobedience” while watching it. If you want to learn more about the actual history of the revolution, then you should go to the long article “Oscars: Real History Behind the Film ‘No’“ edited by Peter Kornbluh at the following site: http://portside.org/2013-03-08/oscars-real-history-behind-film-no. We can be thankful that the film’s Oscar nomination has brought it to greater public attention than such a foreign language film usually receives.

For Reflection/Discussion
1. In what ways is this film similar to Argo? How does the main character in each movie use unorthodox measures to achieve his goal?
2. What do you think of the visual symbols: such as the name of the beverage Rene is selling “Freedom; “ the mime;” the use of a rainbow; the constant employment of the large graphic  “No”? The use of the soap opera stars and the helicopter atop the tall building?  Theater of the absurd, maybe, but–?
3. How do the various characters’ view of Rene change during the course of the film? What does Veronica overlook in Rene at first when he takes on the “No” campaign: after all, who is the head of the “Yes” campaign? What could this portend for Rene’s future career?
4. Our Age of Enlightenment Founding Fathers maintained that in public discourse the side employing the facts (truth) in a rational argument would win: but does Rene’s campaign follow this? How is what he calls his society’s “the social context” very different from the 18th/19th centuries? How are images as important, or mores so, than rational arguments in today’s world? (You might think back on political ads in our own nation: do they appeal to the mind or to our emotions?
5. Why did Rene not want to use scenes and stories of Pinochet’s past brutal tactics in the campaign? What effect did he think, and fear, these would have upon the minds of the majority of people who did not participate in the political process? How was his campaign ironically a positive, rather than a negative one, despite the logos?
6. How did you feel at the end of the film? As a believer where did you see the God of the prophets at work in the story?