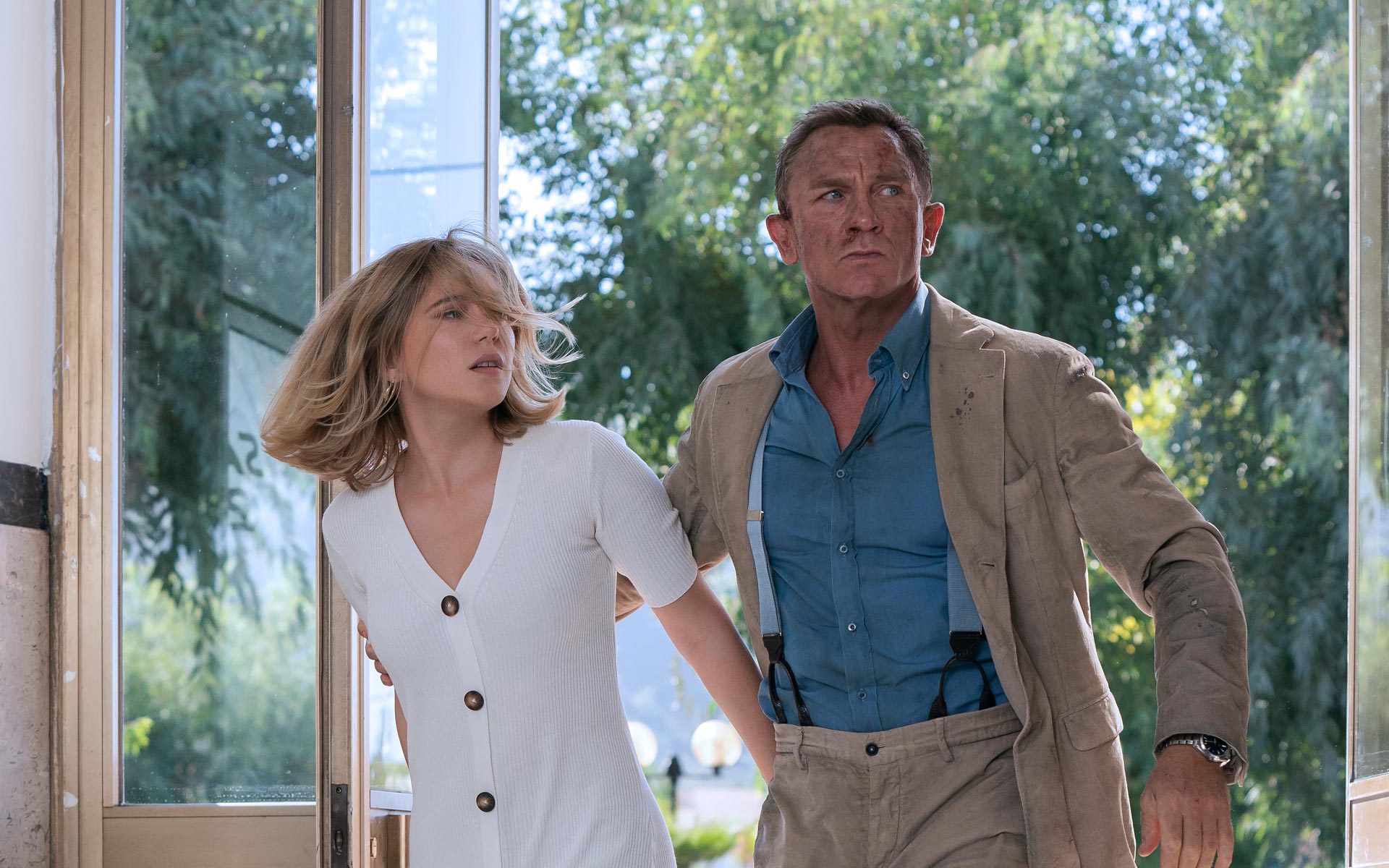 
"The proper function of man is to live, not to exist. I shall not waste my days in trying to prolong them. I shall use my time.

Although not an ardent James Bond fan—he has always seemed to me to be a cold-blooded sex/killing machine—I wanted to see the new film because it would be Daniel Craig’s last portrayal of Agent 007. And also because I admire director Cary Joji Fukunaga’s Beasts of No Nation and Sin Nomine so much. (A third reason is that years ago I read Benjamin Pratt’s intriguing  Ian Fleming’s Seven Deadlier Sins & 007’s Moral Compass. More on this later.)  Am I ever glad I did, as No Time to Die turns out to be a love story as much as an action thriller, a film dedicated as much to touching the heart as to arousing our flow of adrenalin.

Before the front titles there are two action-packed sequences. The first is a flashback to the villainous Lyutsifer Safin (Rami Malek) arriving to kill the young Madeleine Swann’s mother out of revenge. The little daughter shoots Safin but does not kill him. Running from him across the ice-covered lake, the little girl falls through and becomes trapped beneath it, and…

In the second, years later, Bond is in the hilltop city of Matera, Italy, with his lover (from the preceding movie Spectre), the now grown-up Dr. Madeleine Swann (Léa Seydoux). Urged on by Madeleine, Bond visits the tomb of his dead lover, Vesper Lynd, who had once betrayed and out of love and remorse had killed herself (in Casino Royale). Bond has written a note of love and request for forgiveness. The tender moment is suddenly shattered by an explosion from a bomb planted in the tomb by Spectre assassins. Bond survives and takes off through the steep and narrow streets in a running battle featuring motorcycles and Bond’s snazzy Aston. Bond disposes of his would-be assassins but, believing Madeleine has betrayed him, ends their relationship despite her pleas.

Five years later he is retired, living in a colorful Jamaican town. His longtime CIA friend Felix Leiter (Jeffrey Wright), accompanied by U.S. State Department representative Logan Ash (Billy Magnussen), shows up to ask for his help in a mission to Cuba. M16 scientist Valdo Obruchev (David Dencik) has been kidnapped by agents of Spectre even though their boss Ernst Stavro Blofeld (Christoph Waltz), earlier had been caught by Bond and sent to a special prison. Despite his imprisonment, by means of an ingenious device Blofeld is able to see and communicate with his minions. Obruchev is in charge of Project Heracles, a biological weapon consisting of nanobots that infect like a virus upon touch. Coded to a person’s DNA, they make the target deadly to relatives but harmless to others.

Bond resists his friend’s plea, but ultimately is persuaded because of the danger of the weapon. He travels to the island in the company of new agent Paloma (Ana de Armas). In the ensuing battle with Spectre’s agents the beautiful Paloma proves a skillfully resourceful companion to Bond. The Cuban sequence would have been the highlight of many action films, but far more is to come.

Bond will reunite with Madeleine in her childhood home in Norway and discover that she has mothered a daughter named Mathilde. Madeleine denies that the charming little girl is his, but those blue eyes…There will be various infections of the deadly nanorobots, an infiltration of the nanorobot factory located on a remote island between Japan and Russia, and lots of fights involving fists, guns, and eventually rockets launched from a Royal Navy ship. And of course, delightful scenes with M (Ralph Fiennes), Moneypenny, and Q (Ben Whishaw).

There are numerous humorous scenes, one example being with M16’s head, who goes by the singular name of M. Bond and M are discussing the latest threat to the world. When Bond asks “What is the latest madman attacking?”, his boss answers, “World leaders, innocent civilians, freedom — that sort of thing.” “Just the usual?” Bond asks. “Just the usual,” M answers.

Another humorous moment is the conclusion of a meeting with M. Bond is drawn up short when M calls to Moneypenny, “Send in 007!” followed by, “You can go, Bond.” With no ceremony or sentiment M dismisses the man who for years had been his star agent. Bond’s successor is a lovely Black woman named Nomi (Lashana Lynch). She admires Bond but is also eager to prove that she is worthy to assume his title.

“The latest madman” trying to destroy the world is Lyutsifer Safin (Rami Malek), a  nasty guy with a grudge against the evil Blofeld (Christoph Waltz) and his Spectre organization, and also the world in general. If the nanobots are loosed on the world, millions of people will die—indeed, Bond himself does become infected with them and must make a painful decision that will affect his relationship with Madeleine.

In this last of Daniel Craig’s Bond films the actor succeeds in humanizing the agent with the “license to kill.” He has obviously been hurt in the past, we see early on at the tomb of his dead lover in the hilltop Italian city. He has a new lover, and so he has come to Vesper Lynd’s resting place to make amends, writing a note that reads, “Forgive me.” When it appears that new love Madeleine has betrayed him to Spectre assassins, he tries to move on. We are delighted when he learns the truth and is reconciled to Madeleine—and to learn that he might be the father of her charming little girl. Then comes his anguish from learning that now that he is infected, the nanobots will kill the persons he loves if he touches them. Hence his heart-wrenching decision that he makes on the island where the nanobots are being manufactured.

I am still bothered by the casual way that Bond knocks off dozens of the goons in each violent encounter: like most thrillers such goons are relegated to the subhuman—they have no feelings, no loved ones, or ant reason for existence except to shoot poorly and to be killed off, often by a single shot from the hero while the latter is running or tumbling through the air. However, I regard Cary Joji Fukunaga’s film with far more respect and admiration than the previous ones in the series. No Time to Die is a thriller that will draw Bond fans and those who love the genre. But it should also appeal to romantics who love stories of star-crossed lovers. That last scene with Madeleine and little Mathilde will satisfy Bond fans (especially her last words!) and bring a tear to the eyes of anyone who has a drop of romanticism.

Oh yes, I almost forgot. People of faith, if they haven’t already, should obtain and read the book mentioned above, Ian Fleming’s Seven Deadlier Sins & 007’s Moral Compass. In Benjamin Pratt’s fascinating exploration of the novels by Ian Fleming, he asserts that the author was concerned with serious moral issues, and not out just to produce page-turning spy thrillers. Pratt insists that Fleming was deeply interested in the traditional Seven Deadly Sins, which the latter translates as:

To read more on this in a recent issue of my sponsor ReadtheSpirit.org, as well as to learn how to obtain Pratt’s book, click here. This can help you go back over the film and identify scenes that correlate with one of the Deadly Sins. Mr. Pratt opens up for us a new way of seeing the films. By going back to the novels, we can see how the filmmakers often overlooked Fleming’s intentions, focusing not on the author’s moral insights but upon Bond’s amorous and violent exploits. Equipped with this book, a group can have a delightful time exploring this film.