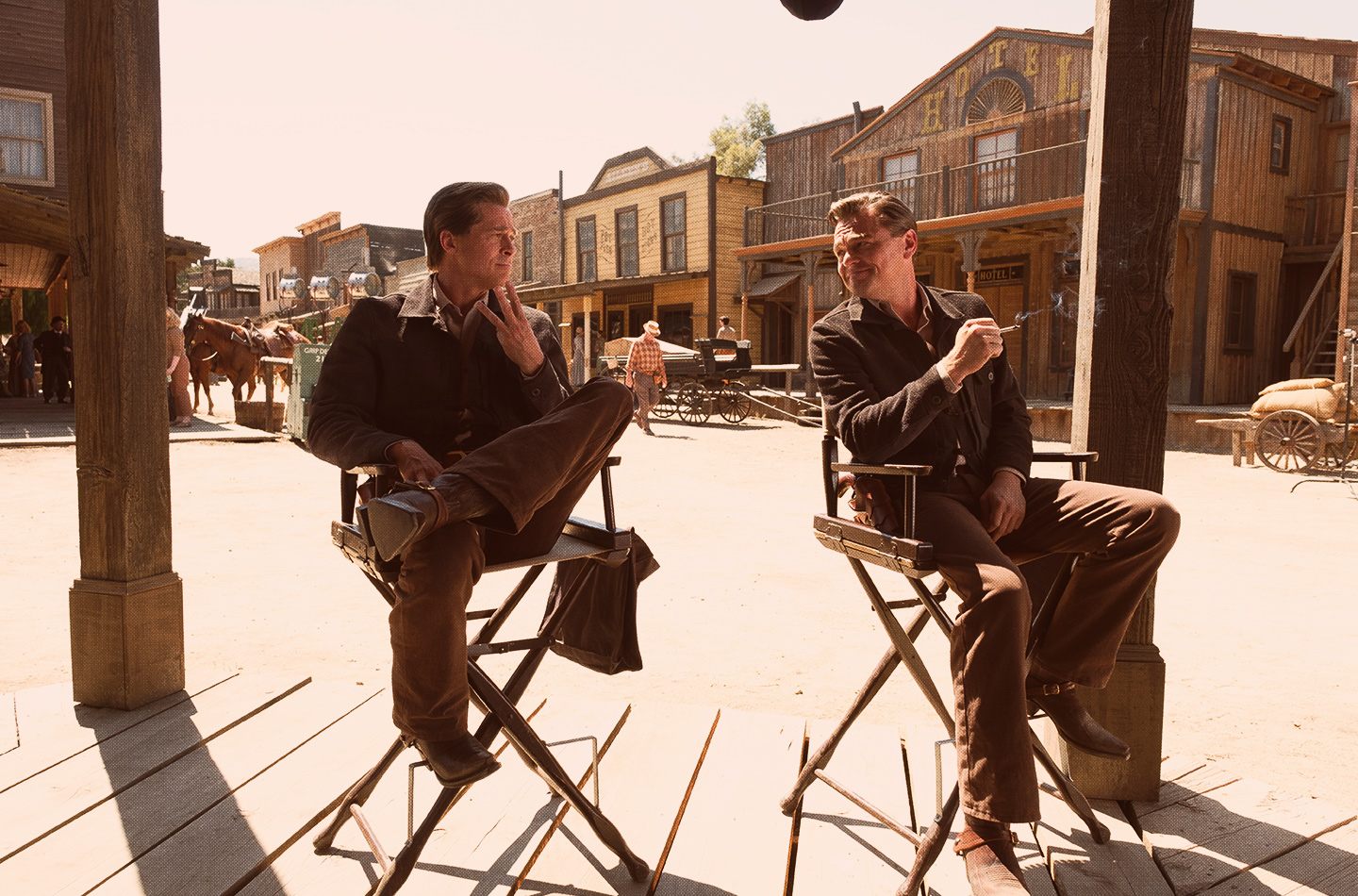 Some friends play at friendship
but a true friend sticks closer than one’s nearest kin.

Not since Pulp Fiction have I been so mesmerized by a Quentin Tarantino film. From start to finish this tale of friendship and declining celebrityhood set in the glittering world of Hollywood is a delight to watch. It also can be seen as a tale of the decline of one celebrity in contrast to the rise of a new one—though unlike A Star is Born, this film boasts no soaring songs, Tarantino preferring violence to music. The mixing of actual 1969 Hollywood stars and Charles Manson family members with fictional characters, as well as the documentary style of listing the dates, name of the days, and even exact time in which a scene begins, make the film seem like a docudrama.

In what has to be their best performances in years, Leonardo DiCaprio and Brad Pitt beautifully play off each other as long time buddies now perturbed over their declining prospects in TV and films. The first is Rick Dalton who starred in “Bounty Law,” a TV Western series when the medium was a black-and-white in the late ’50s and early ’60s. Pitt is Cliff Booth who had served as Dalton’s stuntman, while picking up other gigs on the side. Dalton for the past few years has been able just to snag guest spots on TV series, most of his roles now being the Bad Guy. Booth has a rumor hanging over his head, that he has killed his deceased wife, and so no studio will hire him. The occasional narrator points out that Booth is “more than a friend and less than a wife.”

Due to his excessive drinking Dalton has lost his driver’s license, so Booth serves as chauffeur, gofer, and handyman for the house on Cielo Drive, it’s purchase being the best thing that Dalton had done before squandering his cash. Property values in the area had shot sky high, with the house next door being rented by the hot Italian film director Roman Polanski ( Rafal Zawierucha) and his new wife Sharon Tate (Margot Robbie). Booth himself lives next to the Van Nuys Drive-in, sharing an old trailer with his dog, which he overfeeds when he returns each night.

We learn more about Polish director Roman Polanski and Sharon Tate in the glitzy party at the Playboy Mansion where they dance with Mama Cass and Michelle Phillips. Pointing to them, Steve McQueen (Damian Lewis) relates their story and how Tate is still adored by her ex-fiancé Jay Sebring (Emilie Hirsch) who is also at the party, along with Bruce Lee (Mike Moh).

There is a delightfully humorous scene later on when Booth, who has accompanied Dalton to the set of his TV Western shoot, gets into a fight with Bruce Lee, who is there shooting an episode of “The Green Hornet.” The arrogant player of Kato under estimates Booth. Instead of easily knocking down his opponent, Lee finds himself flying through the air and denting the expensive car parked nearby when Booth is able to grab hold of him and fling him into its side.

Al Pacino has a small role as Marvin Shwarzs, Dalton’s agent. Early in the film he is trying to convince his client to go to Italy to star in a spaghetti western as a means of reviving his career. At first Dalton is against this because he sees the genre as a major step down, but then with Booth in tow, he does move to Rome where he stars in three such films. Although this does not restore his career to its former glory, the films are successful enough to garner him sufficient cash to live on back in L.A.—plus, he returns with a hot Italian wife who speaks no English.

For me the most powerful sequence concerns Dalton’s being hired as the bad guy on a new TV Western directed by (real life) Sam Wanamaker (Nicholas Hammond). The hero of the series James Stacey (Timothy Olyphant) is like the rising star that Dalton had been almost 20 years earlier. Dalton strikes up a friendship with the child actress Trudi (Julia Butters), a regular in the series when he sits down next to her to read his novel. She glances up from the script she is studying to ask about his book, and he tells her it is about a rodeo rider named Easy Breezy. It soon becomes apparent that Easy’s riding career is also on a downward incline. As their talk continues, Trudi proves to be a precocious child with a kind heart. During the filming of Dalton’s scenes, he becomes angry with himself after blowing his lines several times. But at last he gets the crucial scene right, one in which he holds on his lap the girl at gunpoint, the scene climaxing with his confrontation with the hero. He shoves the girl onto the floor, an action not in the script, but which everyone, Trudi included, declare is a brilliant addition to the scene. Wanamaker and the others praise Dalton, but it clearly is Trudi’s comment that he appreciates the most, that his was the best acting she had ever seen.

The creepiest sequence is when Booth, having exchanged glances on several occasions with the lithesome teenager Pussycat (Margaret Qualley) while he is driving in the area, at last finds they are headed in the same direction and picks up the hitchhiker. Pussycat informs him that she lives with a group of hippies led by Charlie Manson at the Spahn Ranch. Booth and Dalton had worked there during their “Bounty Law” days, so instead of just dropping off the girl—whose sexual advances enroute he had refused because she was underage—he gets out of his car, saying that he knows the owner George Spahn (Bruce Dern) and wants to greet him. Actually he is concerned that the hippies might be taking advantage of the old man. Manson’s followers, emerging from several of the cabins, eye him like a group of vultures anticipating their next meal. Manson himself is away, so it is Squeaky Fromme (Dakota Fanning) who meets him at the door of the main house and tries to block his entrance. This makes him even more suspicious of the presence of the hippies. But when he finally manages to enter Spahn’s bedroom, the sleeping old man is upset at being awakened and befuddled concerning their long ago relationship. Before he can leave, Booth is accosted by a hippy far less capable than Bruce Lee, and thus beaten within an inch of his life. Pussycat rides off up the hill to summon the resident tough guy Tex, and so tension mounts even higher. Booth had beat up the hippy because he had plunged a knife into his tire, and so we wonder if Tex will return in time to confront the intruder.

Coming as a relief amidst the high tension sequences is the one in which Sharon Tate is shown as relishing her new status as a star while she still is not a familiar face to the public. She spots a theater where the film she co-stars in with Dean Martin and Elke Sommer is playing, one of the Matt Helm films, The Wrecking Crew. Walking up to the box office, she is told that the matinee price is 75 cents. She informs the girl, and then the manager, that she is in the film, and so is let in free. She sits there, her boots off and feet propped on the back of the seat in front of her, and enjoys watching herself on the big screen.

The last described sequence in no way advances the plot, but it brings the unfortunate actress to life as being so young and full of promise that we dread the inevitable climax on the night of August 9, 1969. Obviously knowing that we know what happened on that deadly night, Tarantino pulls of some surprises. The events leading up to the invasion by members of the Manson gang are told from the perspective of Dalton and Booth. The outcome is both unexpected and satisfying, leaving viewers to reflect on the fairy tale title of the film and its theme of friendship.

Tarantino still satisfies his violence-prone fans with plenty of blood and gore, so my reaction to the film is a mixture of pleasure and aversion. There are two scenes involving the dispatch of Bad Guys via a flamethrower that will bring to mind the climax of Inglorious Basterds, all of which are meant to elicit cheers from the audience. The director, perhaps more fervently than anyone in Hollywood, believes in the myth of redemptive violence—“Pour it on them, they deserve to die as painful and a gruesome death as possible!” Thus I cannot give the film a full rating of 5, as good as the rest of it is. And yet with its detailed recreation of a fascinating period in our national history, and once upon a time in Hollywood in particular, I look forward to seeing the film again.