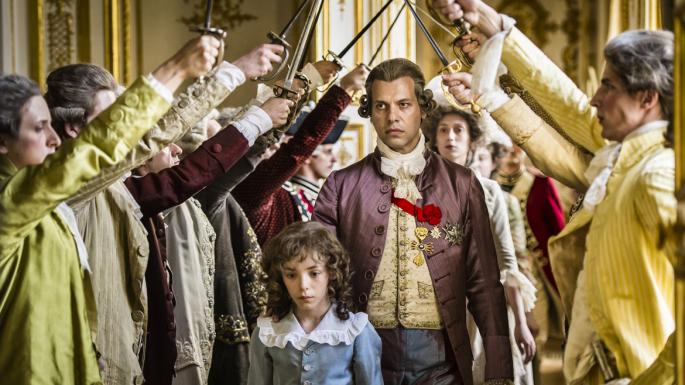 and you shall proclaim liberty throughout the land to all its inhabitants.

French writer/director Pierre Schoeller’s epic will enlarge our truncated view of the French Revolution, his film covering the period from the fall of the Bastille in July 1789 through the execution of King Louis XVI by guillotine on 21 January 1793. Schoeller attempts to give us a view of events from the perspective of those at the bottom of society.

Among these lower class people are a glassblower known as L’Oncle (Olivier Gourmet), his wife Solange (Noémie Lvovsky); the washerwomen Françoise  and Margot (Adèle Haenel and Izïa Higelin); the herring seller Reine Audu  (Céline Sallette) and the vagabond Basile (Gaspard Ulliel). In scenes set at the National Assembly where the fate of the royal family is debated, a number of notables (some known to French viewers but to Americans) make their appearance, the most prominent being the lawyer Maximilien de Robespierre (Louis Garrel); Jean-Paul Marat (Denis Lavant); Louis Antoine de Saint-Just (Niels Schneider). And there is of course, the royal family, King Louis XVI (Laurent Lafitte) and Queen Marie-Antoinette (Maëlia Gentil).

At the end of the taking of the Bastile the besiegers knock down the prison’s parapets, letting the shine onto the streets below for the first time, much to the wonder and delight of the onlookers.

Of all the characters Basile undergoes the most change. We first see him in a village where he stands mute, locked in a stock and branded as a chicken their. The crowds deride him, but after a while a kindly priest sets him free. Wandering aimlessly as the royal coach draws near, Basile kneels in obeisance. Impressed the King blesses him by touching his head. And yet later, he will join with the Parisians in rejoicing over the fate of the King. Married to Françoise and apprenticed to L’Oncle, Basile becomes a father and a budding glass blower.

In the Estates General, the National Constituent Assembly, and finally the National Convention we see that the Revolution evolved slowly, the majority at first agreeing with the people’s demand that the Royal family abandon their sumptuous palace at Versailles and return to Paris where a closer eye can be kept on them. The King reluctantly agrees, but his subsequent foolish behavior by attempting to escape radicalizes those who have fought for “Liberty and Equality!” The final vote over his execution is drawn out as a good number of famous and lesser know delegates make short speeches—often just one word for or against—until at last we arrive at the scene where the King, standing by the guillotine looks out upon and addresses the people for the last time. The film stops short of the period known as The Reign of Terror when it seemed as if the Revolution was devouring its own children.

Even though I often did not know which member of the National Assembly was speaking or the significance of an event, I found the film impressive. Schoeller’s roving camera often gives us a bird’s-eye view of the city and the crowds and then in close-ups intercut with long shots of the violence during the people’s

There are some interesting symbolic scenes, such as a hypocritical washing of peasant feet by King Louis, so greatly in contrast to his profligate lifestyle at Versailles; and Basile learning to shape a molten piece of glass before Uncle’s furnace intercut with scenes of he National Convention delegates debating the fate of King Louis, obviously a metaphor that out of the furnace of the evolution a new nation is being forged.

The film has been roundly condemned by some critics, but I found it very interesting in its scope and moving some of its scenes very moving. I couldn’t help but contrast our own Revolution with that of the French. Pierre Schoeller’s epic makes me understand a little better how the grudges of the French people against the monarchy ran far deeper and longer than ours. There is no room left for our feeling superior because less blood was shed on this side of the Atlantic. Ours was never a revolution of the classes; the attempt to wipe out the nobility in France definitely was, and the disruption of the nation would continue throughout the 19th century.

The French revolution told more from the POV of the Parisian underclass & members of the National Assembly who debate the King's fate.
Editor Rating ★★★★★4 out of 5
More Details