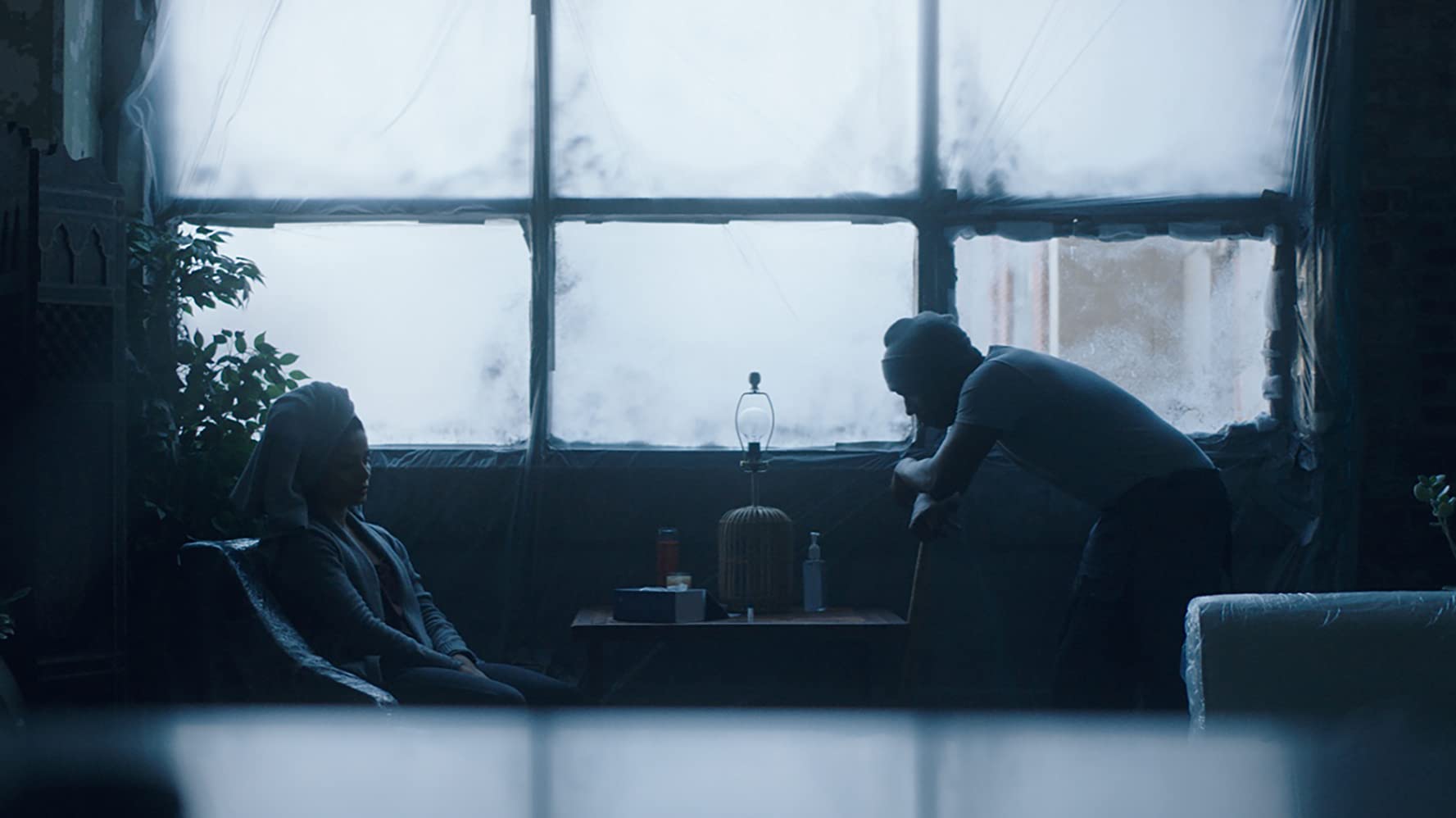 Truly the thing that I fear comes upon me,
and what I dread befalls me.
I  am not at ease, nor am I quiet;
I have no rest; but trouble comes.”

The plot of director/writer Takashi Doscher’s apocalyptic film differs from what is transpiring today in that most of the pandemic victims are women. Flakes of ash fall from the sky when a comet passes close to earth. Lovers Eva (Freida Pinto) and Will (Leslie Odom, Jr) become aware of its deadly gender-specific nature when her roommate Carolyn (Tia Hendricks) staggers into their apartment deathly ill. They rush her to the hospital where they find chaos in the corridors—and notice that all the victims are women. Will snatches a hazmat suit and rushes Eva back to the apartment. Eva, however, is not infected, and Will, following the instructions of her doctor father, who sends instructions over the Internet, intends to keep her healthy by sealing off their apartment, using a hazmat suit when he goes out for food, always taking a shower when he returns, and keeping his distance from her.

The movie has been edited in a nonchronological order, so the above we do not see until later on. It actually begins on “Day 400” of the epidemic with gas masked police (I thought they were soldiers at first) pounding on the door. Will pops Eva into the compartment beneath their bed, and then opens the door. Barking orders and rifles at ready, the police rush in, demanding Will sit down. Their leader is surprised at all the duct-taped plastic sheeting sealing the apartment, and demands to know, while his men search the premises for women. He stares wide-eyed at the two walls near their computer. They are covered with photos of women, each marked with a code. In a later sequence we will learn that during her months of confinement Eva had kept in touch with a group of women, until either the plague or the police had reduced its numbers until only, she was left in safe hiding. This dramatic sequence of embattled sisterhood is one of the poignant parts of the film!

The government, faced with the possible extinction of humanity, has resorted to draconian measures amidst the pandemic by setting up a program of making women produce children. A news report states that women have become so scarce that the reward offered for their capture is upped to $2 million. Eva, once she realizes she is one of the last women, begins to argue with the overly protective Will. Their interchange foreshadows what must be taking place today in the midst of a real pandemic and quarantine. She complains that their safe apartment has become her prison and she wants to get out into the air. Her lover is now her jailer, falling back on the old paternalistic ways that she has rejected.

Finally, Will agrees, and they set off with necessities stuffed into backpacks, she resorting to binding her breasts with cloth and duck tape to make her look like a young boy—but leaving her eyebrows perfectly trimmed and stuffing her long hair beneath a cap rather than cutting it. They decide to stop at a café for some comfort food—waffles and fried potatoes but no eggs because hens and other female animals have been killed off. This proves to be a mistake because the owner and other customers sense something is not right about the “boy,” and when the couple get wind of this, their dashing out without paying their bill confirms the suspicions. A father and his adult son decide to follow the pair, leading to much grief on the part of all. The sequence in the wilderness that night will not be a pleasant walk in the woods. The last scene by the beautiful waterfall that Eva and Will remember from an earlier trip is probably meant to provide a touch of hope to a depressing tail, but…

This is probably not a film you will want to watch right after the Evening News reports the latest figures of the victims of the Coronus virus, but because of some of the human interactions it is worth watching. Far less hopeful than Children of Men, it includes some seemingly prescient scenes, such as Eva’s reactions to her long confinement and resenting always being told what to do. She argues along lines very much like those angry anti-quarantine demonstrators we see on the Evening News.

The police invasion of their apartment ends with a nice humane touch when the officer spies Eva’s medicine bottle and, obviously aware that Eva is hiding, says to will, “I’m not taking a sick one, I know what they do with the sick ones.”

The couple in the film are completely secularized, never evincing a thought about God or prayer amidst their terrible predicament. The only reference to religion is negative, the usual Hollywood depiction of fanatical leaders declaring that the plague is God’s judgment upon sinful humanity. Although Job’s lament, ” Truly the thing that I fear comes upon me, and what I dread befalls me. I  am not at ease, nor am I quiet; I have no rest; but trouble comes, “describes this couple’s state of mind, but neither of them would think of calling upon Job’s God, not even to complain. The title well describes their spiritual as well as, in the wilderness, their physical situation—they Only have themselves to depend upon. Whether or not this is enough, the filmmakers leave it up to the viewer to decide.