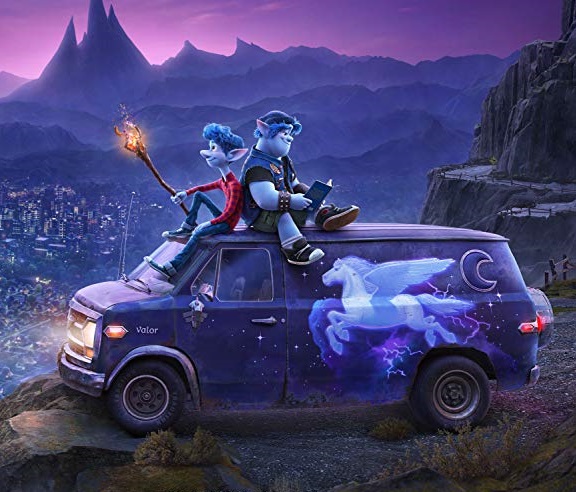 A friend loves at all times, and a brother is born for a time of adversity.

Onward was co-written and directed by Dan Scanlon (remember his Monsters University?) and is set in a modern world that devolved from a magical one. The narration regards the old one when magic was afloat as a golden era, the decline to the present beginning when an inventor lit the first light bulb, ushering in an era in which science replaced magic.

Two elves, Ian Lightfoot (Tom Holland) and his older brother Barley (Chris Pratt), are being raised by their widowed mother Laurel (Julia Louis-Dreyfus), who’s dating a gryphon police officer Colt Bronco (Mel Rodriguez). The boys could hardly be more different, the slight Ian being grounded in reality, whereas his hulk of a brother Barley lives to play a Dungeons and Dragon-like gang and tool around in an old van named “Guinevere” and decorated inside Medieval style. Pining for the father he never knew, Ian listens to old tapes of his father and wears his college sweatshirt. He is so shy that he fouls up his birthday party invitation to a group of fellow students at Mushroomton High.

As he approaches his 16th birthday, Laurel follows her husbands instructions by giving him a magical staff and a gemstone, with a spell that will bring Wilden back to life for 24 hours. What a surprise. However, the ever-tussling brothers argue over who can best execute the spell, the result being that they are only half successful—I mean, literally half successful, only the bottom half of their father their Wilden (Kyle Bornheimer). To complete the spell they must secure a magical gem hidden in a place called Ravenspoint.

Part of the delight of the film is that the guys later will indeed be guided by a series of stone ravens, each pointing them in the right direction. Still another funny touch is that the huge dragon mural, or at least its face, painted on the school building will become a part of the monster dragon that rises up at the climax of the film, threatening everyone with destruction. Another delightful touch is that Barley has pasted an “O” over the “D” of his van’s gearshift, the “O” standing for “Onward,” the motto for this exuberant brother.

How all this works out adds up to a fun time for families looking for a fun time together. Pixar continues to live up to its reputation for being the most creative studio in the U.S. The film is a funny celebration of bothers, who though they may be totally different from each other, will always come through for each other. The ending, with Ian now fully appreciating the brother he had resented and feuded with throughout the film, is guaranteed to elicit a tear or two, given what Ian does. It will prod those who have a brother to appreciate him even more, and cause us who do not to wish that we had one.

Given that the heroes are brothers, you might think that there is little in the film for girls, but the Pixar creators are too smart for such an outcome. There is Corey (Octavia Spencer), a manticore – part-lion, human and scorpion – who owns a raucous family restaurant—and, best of all Julia Louis-Dreyfus’s Laurel, who sets off on a quest of her own to find her two absent sons. Turning into a sword-wielding Amazon at the climax, she becomes crucial in defeating the dragon that threatens to derail her sons’ quest.

I am happy to report that Pixar continues its string of family-oriented, thought-producing tales that enlarge our imaginations. The creators live up to the opening line of the film about the world being a place of wonder.