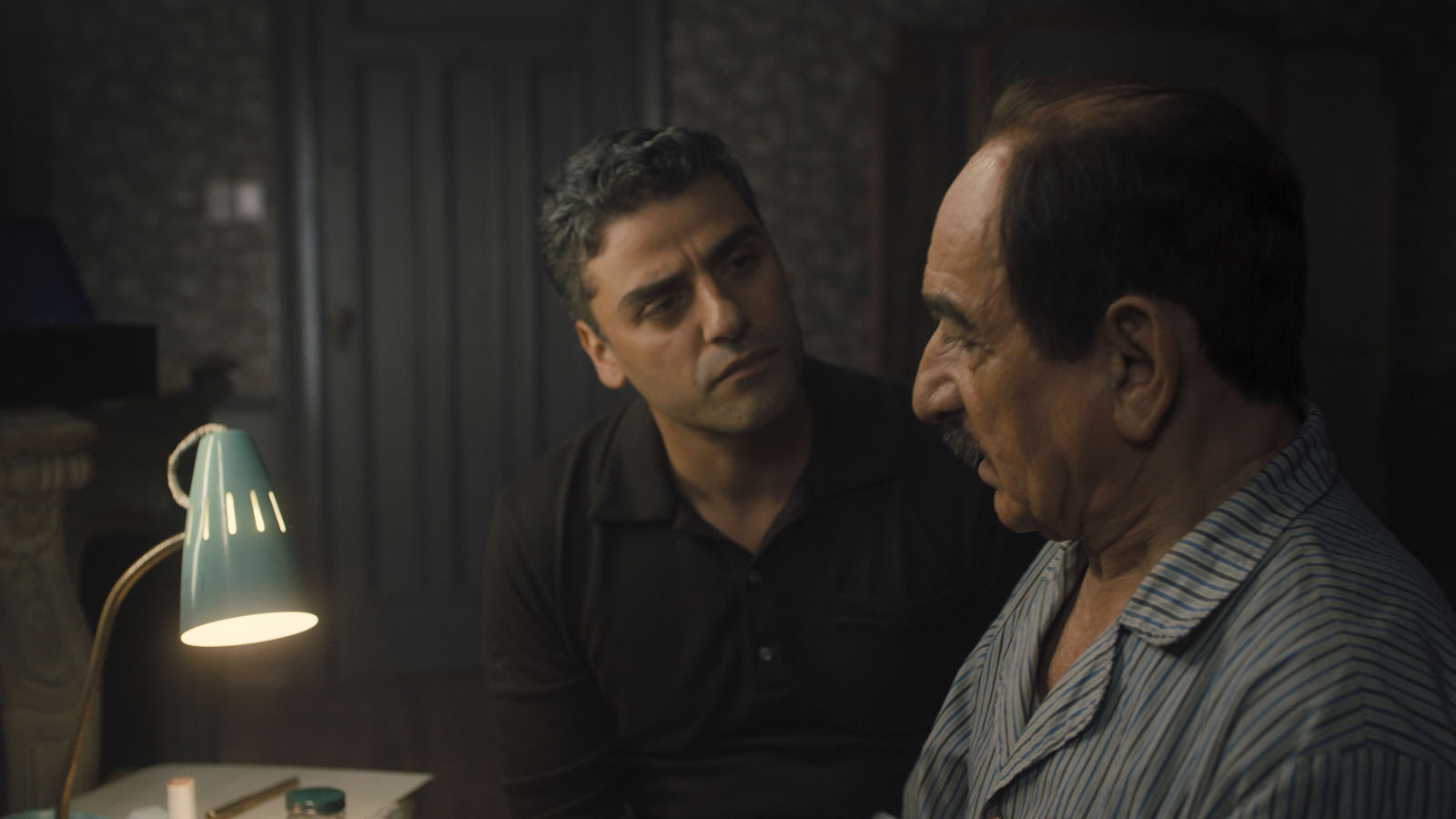 
Ah, you who call evil good and good evil, who put darkness for light and light for darkness, who put bitter for sweet and sweet for bitter!

Director Chris Weitz and scriptwriter Matthew Ortontell the story of the Israeli capture of the Nazi who prompted writer Hannah Arendt’s controversial phrase “the banality of evil.” As played by Sir Ben Kingsley, Adolf Eichmann is more than the faceless bureaucrat devoid of ideology she had depicted, he is part of the unrepentant Nazi community that had escaped to Argentina, still holding meetings advocating the expulsion of Jews from society. And in a repeated flashback, we see him in uniform attending the slaughter of some 8000 Jews standing in the trenches they had been forced to dig.

The film begins in Austria during the 1954 Christmas season with Israeli agent Peter Malkin (Oscar Isaac)  leading a raid on the home of a Nazi. As his men seize their quarry, Malkin talks with the wife and learns they have the wrong man. Before he rejoins his men, the prisoner is shot. No trial for him! Oh well, he was still a Nazi, Peter thinks.

Jump ahead 6 years. In 1960 Argentinian teenager Sylvia Hermann (Haley Lu Richardson’s) dates Klaus Eichmann (Joe Alwyn), whom, she discovers when he takes her to a Nazi meeting, is as rabid an anti-Semite as has father Adolph, who is working at an auto factory. He has assumed the name of Ricardo Klement. Sylvia’s blind father Lothar Hermann (Peter Strauss) is also from Germany, but he is half-Jewish. Thus, they report her discovery to Jewish authorities.

In Tel Aviv Mossad leader Isser Hare (Lior Raz), informed of the Nazi’s whereabouts, does not want to waste time on what could be another wild goose chase of “the architect of the final solution” because of the scarcity of agents. However, under pressure he finally relents, assembling the team that will hunt down, kidnap the Nazi and bring him to Israel for trial. The necessity for such a clandestine operation is due to the pro-Nazi leanings of the Argentinian government which would refuse a request for the war criminal’s extradition.

The extraction team includes Zvi Aharon (Michael Aronov), Rafi Eitan (Nick Kroll), Hannah Elian (Melanie Laurent), and Isser HareL (Lior Raz). Hannah, a doctor, is needed to sedate the prisoner. Peter is added to the group because of his past experience, even though he is reluctant at first because of the failure in Austria. Prime Minister David Ben-Gurion (Simon Russell Beale), who has endorsed the extra-legal effort to bring the Nazi to justice, urges the group not to fail. “We will try our executioners,” he declares. They will remind the world and tell the story of Hitler’s “Final Solution.” This is also a good reason for watching this film!

Aside from the interesting facts in planning and carrying out the details of the abduction of Eichmann and their escape to Israel, the film serves as a good case study in how to deal with a guilty captive. The Al Israel Airline requires that the team produce a document stating that Eichmann is willingly embarking on the trip before they will allow him to board a plane with the team. Team leader Zvi thinks that harsh interrogation, up to and including torture, should be used, whereas Peter Malkin argues that a more humane approach would be better. Indeed, one of the agents, the impetuous Moshe (Greg Hill), would rather do away with a trial, saying, “We should be putting him down, like a mad dog.”

During the periods when Peter can be alone with Eichmann the two get to know each better, one exchange including Peter’s description of how the Nazis treated the Jews, “You treated them like animals,” to which his captive replies, “We’re all animals. Some of us just have sharper teeth.” The more they talk, the more Peter sees beyond the label “Nazi,” recalling that when he has the German under surveillance he was impressed by the sight of the man enjoying holding a child in his arms. All are surprised and impressed that it is Peter who convinces the Nazi of signing the document merely by promising him that the captive’s wife would be allowed to visit him.

The German colony has cultivated close relations with the Argentinian authorities, so there is a manhunt going on. The movie makers milk this for suspense, but the Israelis and captive do make their escape, after which the trial and sentencing quickly transpire. The Israeli Prime Minister is right that the trial brings before a forgetful world the enormity of the horror that was the Holocaust, as we see in a succession of shots of the camps, the emaciated prisoners and piles of corpses, and, of course, the ovens.

As is the wont of film makers, many details, such as the gender of the doctor, are changed, but the basic facts are well dramatized. This is a tale of justice delayed, but not denied. Those who perpetrated such terrible deed ought to be, and are, punished. For Peter it is also the story of coming to closure with the vision that has haunted him ever since the War—it is the murder of his older sister and her child by Nazis in a wood. Hopefully, he will be able to lay this vision aside and contribute to the building of his nation.

This review is in the October issue of VP along with a set of questions for reflection and/or discussion. If you have found reviews on this site helpful, please consider purchasing a subscription or individual issue in The Store. Past issues of VP are available back to 2012, all of which are accessible to annual subscribers.

When the the Nazi Adolf Eichmann, a major leader in the Holocaust, is discovered in Argentina, an Israeli team sets out to kidnap and bring him to Israel for trial.
More Details