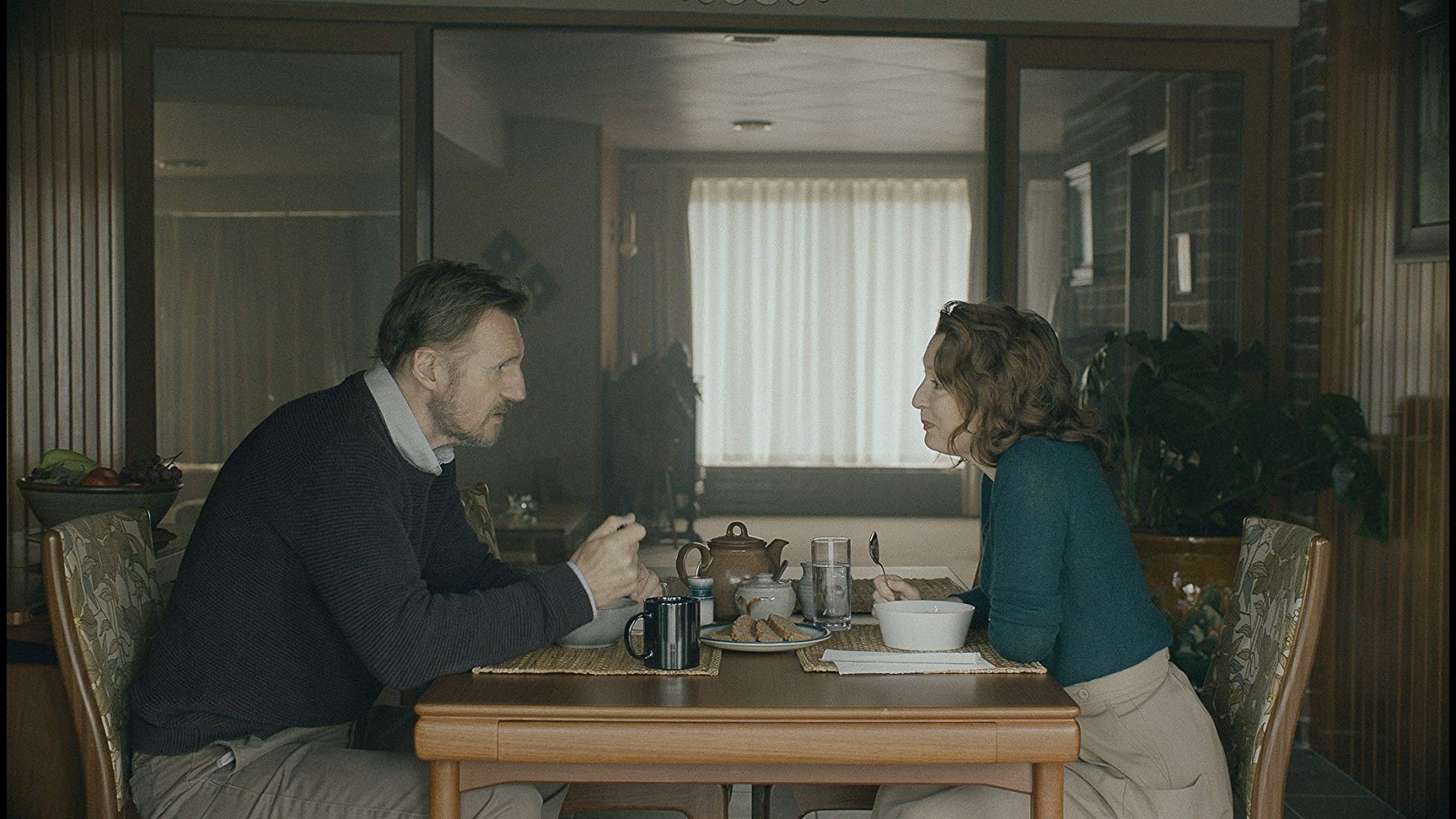 … for he makes his sun rise on the evil and on the good and sends rain on the righteous and on the unrighteous.

Everything about the production of Ordinary Love­ seems appropriate. The story about a long-married couple is directed by a pair of married filmmakers, Lisa Barros D’Sa and Glenn Leyburn, and the script is by the Irish playwright  Owen McCafferty, whose wife is a cancer survivor. Despite what the title might lead one to expect, this is an extraordinary film.

Joan (Lesley Manville) and Tom (Liam Neeson) are a retired couple living in a city apartment in Northern Ireland. Like the name of the first draft of the script, they are “normal people.” Their daily routine includes a walk along the riverfront until they reach a certain tree, turn around, and walk home to eat and watch some television. They enjoy small talk and bantering about small things, such as which of them should take down the Christmas decorations now that the season is over. Then comes the day when Joan calls Tom into the bathroom to have him confirm what she has just felt in her breast.

Tom would brush away her concern about the small lump, but he is with her soon waiting in their doctor’s office for a check up. When the examination calls for further tests, they are told that on a scale of 1 to 5 for having cancer, she is a “3”, the two speculate, he taking the optimistic, and she the pessimistic side. As matters become more serious, Tom assures her that he is with her all the way, even though at times he is excluded when she is put through one of the huge scanning machines.

The two argue at times, sometimes fiercely, but make up, and Joan finds some comfort in conversing with a fellow patient whom she had recognized in a waiting room, a former teacher of their daughter Debbie named Peter (David Wilmot), who informs her that his cancer is terminal. Tom later meets the gay Peter’s life partner

Steven (Amit Shah), who at one point is not allowed to visit his lover because their relationship is not recognized as legal.

Joan and Peter have weathered the loss of Debbie ten years earlier, though the effect of her death lingers. When Tom plans to visit Debbie’s grace, Joan asks him not to “tell” Debbie about her cancer diagnosis. At the grave site the troubled father, of course, does reveal this when he pours out his heart. Tom has to come to the realization that the two cannot fully share the cancer experience. Joan becomes angry when her husband insists on claiming to do so, declaring that the pain, the cancer, is hers, not his experience. And thus, for many of us viewers, the film becomes a cautionary one, insisting that we become aware of our limitations and that we respect the uniqueness of the experience of the sufferer. There is wisdom in the second verse of that old folk hymn, “We must walk this lonesome valley;/We have to walk it by ourselves./Oh, nobody else can walk it for us;/We have to walk it by ourselves.”

As presented by this film, Joan and Peter are secular people, despite living in what some still call a Catholic country. Not only is there no trace of a chaplain at the hospital, but neither of the pair seem to connect the hope for a cure with God. They do not speak of the possibility of an after life, although at the grave Tom talks to Debbie as if she existed somewhere nearby. The couple attend Peter’s funeral, but we see no clergyman, nor trace of a religious liturgy, just an anguished Steven sharing his love for his deceased mate. This secularism became more noticeable when a couple of hours later I attended a screening of the faith-based film I Still Believe in which a beloved wife dies of cancer, but her faith and that of her spouse sustains them through the crisis.

Unlike the producers of the faith-based film, those of Ordinary Love are not promoting a world view, just presenting us with a brave couple who, with all their limitations, are struggling to make the best of a strenuous situation. Their marriage may be the result of “ordinary love,” but it is a commendable one, movingly celebrated in this extraordinary film by filmmakers and two actors at the peak of their powers. I was so delighted to see Liam Neeson take a break away from the adrenalin-pumping Taken thrillers that he had lapsed into after such a marvelous performance as Oskar Schindler or the priest in Martin Scorcese’s Silence. In the thrillers Neeson’s father/husband always knows what to say or do in a world of action, but in this film’s realistic world of suffering and unfamiliar medical procedures his Tom is almost as helpless as a child. The one certain thing is the love that each have for the other. At one point in the story, when Tom and Joan are so angry that he walks away, this marriage could have gone the way of Charlie and Nicole’s last year’s Marriage Story, but it doesn’t. Thus, the film is a celebration of those ordinary couples who survive a crisis and emerge strong and a bit wiser as a result—perhaps your marriage or someone’s whom you know.

The story of how an ordinary Irish couple deeply in love weather the wife's cancer treatment.
Editor Rating ★★★★★5 out of 5
More Details