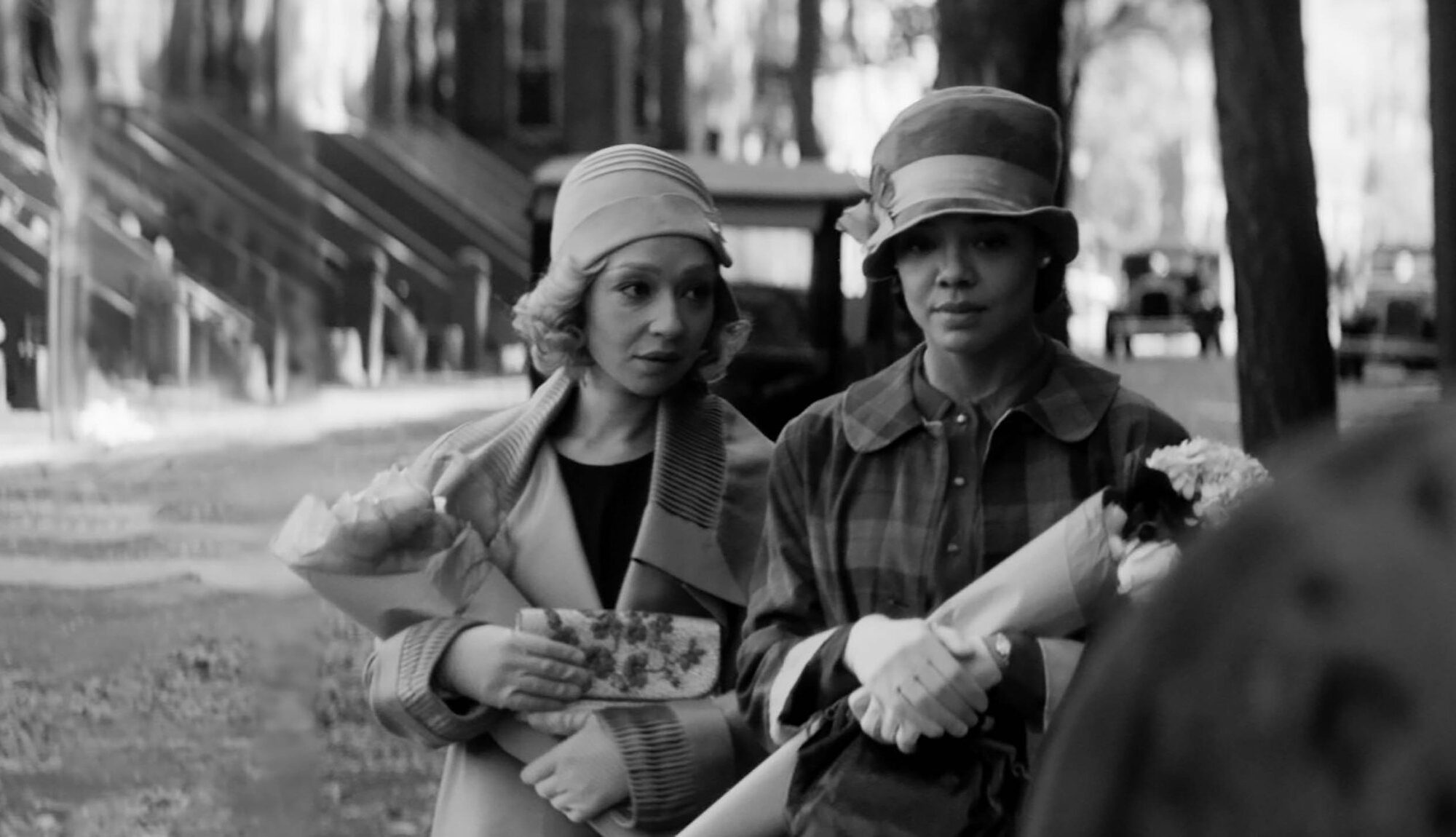 For what is a (wo)man profited, if he shall gain the whole world, and lose his own soul? Or what shall a (wo)man give in exchange for his soul?


I lie awake;
I am like a lonely bird on the housetop.

Actress Rebecca Hall steps behind the camera to co-write and direct this adaptation of Nella Larsen’s 1929 Harlem Renaissance novel about two light-skinned black women able to fool a racist society by passing as white. The film offers insights into both the values espoused by Blacks and the privileges enjoyed by whites. And the film’s tragic ending demonstrates once again the crushing power of those who dominate society.

Irene (Tessa Thompson) is out shopping in downtown Manhattan when she pulls her stylish hat down to partially conceal her face. She is hot and tired and seeks refreshment in the tearoom at the Drayton Hotel. It is the late Twenties when most such establishments banned Blacks. No crude “Whites Only” signs as in the South, racist Northerners are too sophisticated for them, but everyone knows who is not welcome. For Irene her fair skin is her passport to privilege. As long as no one scrutinizes her face where traces of her “Negroid” origin are evident to the discerning, she is safe, so she partially conceals her face by the veil of her cloche hat. But as she sits sipping her drink, one woman keeps staring at her. Irene is perturbed, and then there is mutual recognition—the staring woman gets up and walks over to her. She is Clare (Ruth Negga), an old friend from their days of childhood and youth.

Irene sits down with Clare, and the two begin to catch up on one another’s lives. It soon becomes obvious that they have diverged radically, Irene marrying a black doctor named Brian (Andre Holland) and living in upper-class comfort in Harlem, whereas Clare decided to pass as white and marry the wealthy businessman John (Alexander Skarsgård) in Chicago. It was fairly easy to keep her origin secret because most of her family had died, she having been raised by two white aunts.

We soon meet John when Irene insists that her friend come to their room upstairs for further talk in a more private setting.  John unexpectedly returns, spoiling their intimacy. Irene quickly learns the tension her friend has been living under when he calls his wife “Nig.” Yes, it is short for the hateful word, because, he says, Irene is “becoming darker every day.” When Irene observes that he does not like Negroes, he, sure that she shares his racist views, almost snarls when he replies that he “hates them.” Covering up her disgust by pretending to be amused, Irene for a prolonged moment seems about to out her friend but continues to converse. She leaves as quickly as she can, with no desire to see Clare again.

Back in Harlem with her young sons and husband, we see that Irene is one of those mothers who want to protect their children from the unpleasantries of the world. Brian not only openly talks about current lynchings with her, but also explains the word to their curious son. Irene objects, saying she wants to prolong the boys’ innocence, but Brian disagrees.

Clare surprise Irene s by showing up unannounced at her door. It seems that they will be staying in Manhattan for John’s business for a while, maybe even moving to the city. Irene allows her in, not just to her apartment, but into her social life as the days pass. Clare confesses that she now misses her African-American roots, that she feels so lonely as the wife of a white man. She desperately wants to escape what has become a gilded cage. She misses the liveliness of her family and black friends.

Irene invites Clare to a Harlem jazz club where she introduces her friend to a famous white author named Hugh (Bill Camp). Though impressed by the newcomer’s vivaciousness, Hugh does not like her. Brian, on the other hand, at first is wary of her, preferring that Irene not socialize with her. However, as Clare’s visits increase, Brian is won over by her beauty and warms up to her, even taking her to an event when Irene cannot go. As a result, Irene begins to believe the two are having an affair.

Rebecca Hall’s film differs from older “passing” films like Pinky or Imitation of Life in that it explores the result of successful passing, the person realizing the value of what she has given up and wishing to return to her own kind. Clare feels trapped, separated from her kin by a husband, and a society, that she knows will despise her if the truth comes out.

The word “separation” calls to mind theologian Paul Tillich’s famous definition of sin, quoted above. Clare’s separation is in fact “threefold”–from her black friends; from herself as she continues to deny her identity; and from the God who created her.

Clare’s continually showing up unsettles Irene so that she begins to worry and regard her friend as a threat to her relationship with Brian. This makes us wonder about who is responsible for Clare’s tragic fate when an enraged John breaks into a party where Clare and Irene and Brian are mixing with their friends. Earlier John has run into Irene and a Black friend on the street, and thus figured out his wife’s deception, which to him is a betrayal. The action involving them is so swift that we are not certain if he or Irene, or Clare herself in desperation, is responsible for what happens. I will leave the details for you to discover, and perhaps explore the possibilities in the discussion questions that will be added in the December issue.

Beautifully photographed in black and white, the mood of each scene is greatly enhanced by Devonte Hynes’ jazz score. Tessa Thompson and Ruth Negga are first-rate in their roles of two Black women caught up in the systematic racism that determined that a person’s worth depended upon the lightness of her skin color. Many whites have never seen the adds in “Negro” publications pushing oils and ointments promising to lighten one’s skin color or straighten kinky hair—hair that one day would be made up into Afros celebrating the hair that once had been despised even by its owner, and black skin that would at last be regarded as beautiful. This is a film that prevents us from looking back and wishing for the return of “the good old days.” They may be old, but they were far from being good.

Irene's upper-class life is set into turmoil when after years she is re-united with her friend Clare who has married, passing as white,
Editor Rating ★★★★★5 out of 5
More Details