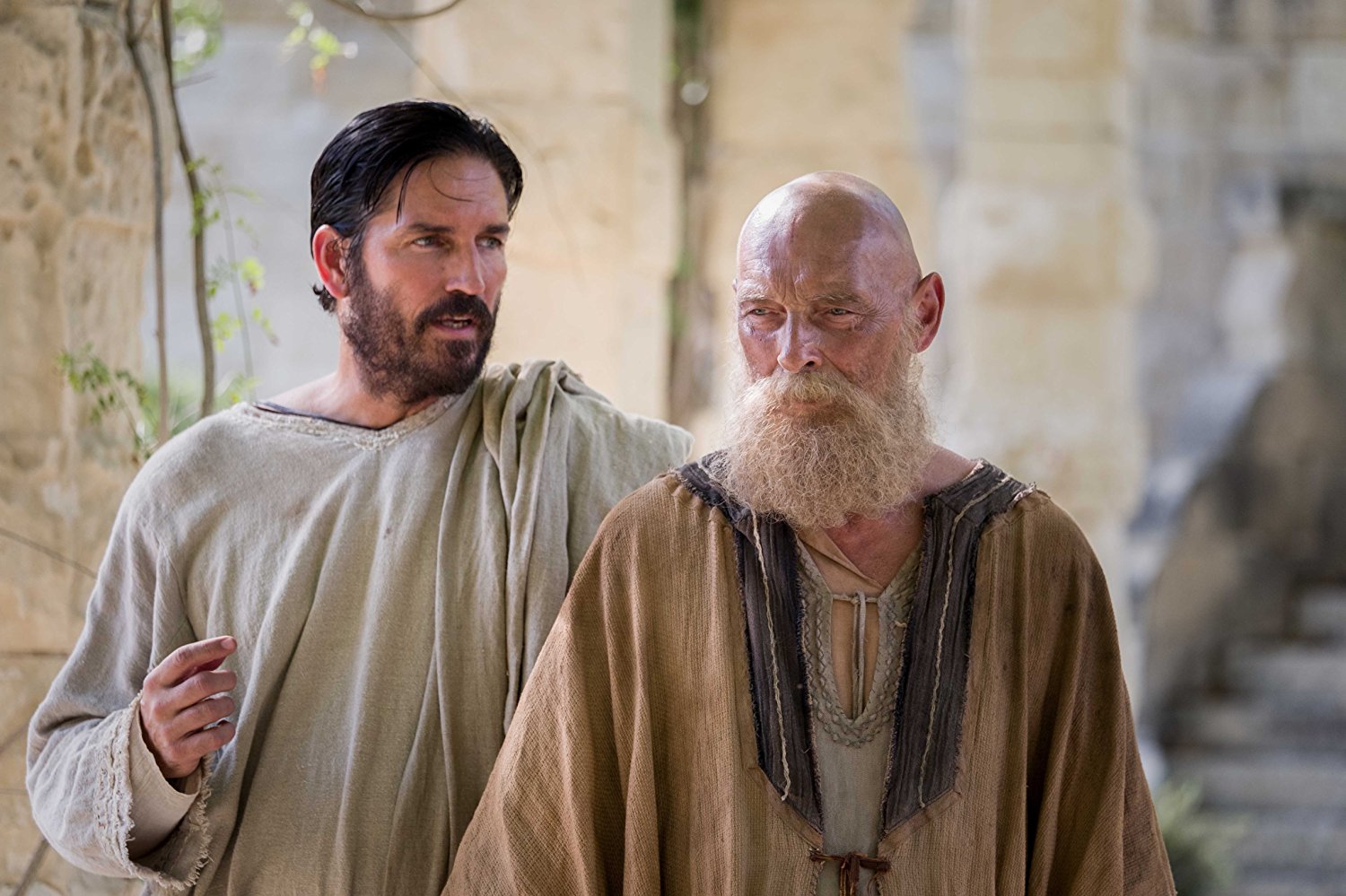 During the Neronian persecution in Rome, Luke visits the imprisoned Paul while church leaders Aquila & Priscilla debate whether to stay or leave.

I have fought the good fight, I have finished the race, I have kept the faith.

Affirm Film’s Biblical film is a bit mistitled because it is really not just about the most famous of Christian missionaries so much as it is about the faith and love arrayed against hatred and persecution that we see two leaders of the Roman church whom Paul greets in his Letter to the Romans. I would direct those who want the story of Paul the missionary to watch Visual Bible’s excellent Acts first (available on DVD), and then go and watch this film. Writer/director Andrew Hyatt does insert some flashbacks to the time when Paul went by his Jewish name of Saul, but these are limited to the Jerusalem stoning of the deacon Stephen, Saul’s conversion on the Damascus Road, and the visit of Ananias, the latter sent to heal the persecutor’s blindness.

The bulk of the story takes place in Rome in 67 AD when Nero, to deflect the blame for the recent disastrous fire in the city from himself, has scapegoated the Christians. Many have been rounded up and burnt as living torches or sent into the arena, but a sizable number have gone into hiding under the leadership of Aquila (John Lynch) and Priscilla (Joanne Whalley), the married couple at the top of the apostle’s greeting list in Romans 16. They are undecided about sticking it out in Rome or leaving to carry on their evangelizing elsewhere. The physician Luke (Jim Caviezel, yes, the same actor who played Jesus in The Passion of…) has come to Rome and sneaks back and forth between their home and Mamertine Prison, where Paul is imprisoned in an underground cell. The film makes no mention of the earlier days when, according to Acts and his letters, the chained Paul had been allowed considerable freedom in receiving visitors and even being able to preach to his Roman captors, so that he could boast how the faith had spread throughout the emperor’s household.

There are no huge crowds, battle scenes, or magnificent palatial sets, writer Hyatt taking a more personal tact to the story, hence the use of so many close-ups and long stretches of dialogue. Luke is eager to learn more details of his mentor’s life so he can write them down for the next generation. He knows full well that Paul has been condemned to death, so he (and Paul) wants to pass on the baton of the gospel to the next generation.  For those familiar with Paul’s letters, much of the pleasure will be in discovering what snatches of the epistles are spoken.

Of course, a modernized version of a major portion of 1 Corinthians 13 is spoken by the apostle. This is well used in his struggle to counter the fearful Christians who want to fight back with violence against Nero. Several times he and Aquila and Priscilla speak against such action, and yes, for the sake of drama, a small group of hot heads do sally forth in a vain attempt to free Paul.

Concurrent with developments among the beleaguered Christians is the struggle of the prison governor Mauritius (Olivier Martinez) concerning his sick daughter. Should he seek help from the Christian physician when none of the Roman and Greek doctors can help her? In the scenes between him and Luke, and later, Paul, we see the ethic of love in action, which so distinguished those early Christians from other sects. Thus, this is not the extraneous subtheme as charged by some critics.

Although we might wish for more on the early life of Paul, what is shown is powerful, his conversion shown in slow motion using close-ups rather than longshots, thus giving the incident a subjective tone. Yorgos Karamihos plays the young Saul of Tarsus, and the visit of Ananias (Manuel Cauchi) effectively demonstrates the faith, courage, and love of the followers of the Way. (The script uses the term for early Christians that Luke did in his Acts of the Apostles.) We also see Paul at times wracked by guilt over the suffering and mayhem he had inflicted on followers of the Way in Jerusalem, and which he intended to duplicate in Damascus. This welcome touch reminds us that the great apostle was no plaster saint but a man wrestling with his darks side, as we all must. The words beneath the title on the film poster are well chosen–“Where Sin Abounds, Grace Abounds More”—a good take away from the apostle’s letters to the Romans and Galatians.

The conclusion is very moving, with Paul entrusting to Luke at their parting what we presume is his second letter to Timothy. His solemn execution is followed by a delightful moment of reconciliation that washes away his feelings of guilt. I would like to describe more of this, but it would spoil your discovery.

The acting throughout is superb, so, although I still have a few qualms about the ignoring of some Biblical material concerning Paul, I have no hesitation in recommending the film. It will be of interest mainly to Christians, but with its message of love, forgiveness, and reconciliation, others too can appreciate it. Indeed, I would have given it a different, more descriptive name (Love in the Dark; Love Against Hate, or even the words from the poster, the somewhat unwieldly “Where Sin Abounds, Grace Abounds More.”)

This review with a set of questions will be in the April 2018 issue of Visual Parables. If you have read several of my reviews, please consider supporting this ministry by buying issues of the journal or my readtheSpirit book JESUS CHRIST, MOVIE STAR.

During the Neronian persecution in Rome, Luke visits the imprisoned Paul while church leaders Aquila & Priscilla debate whether to stay or leave.