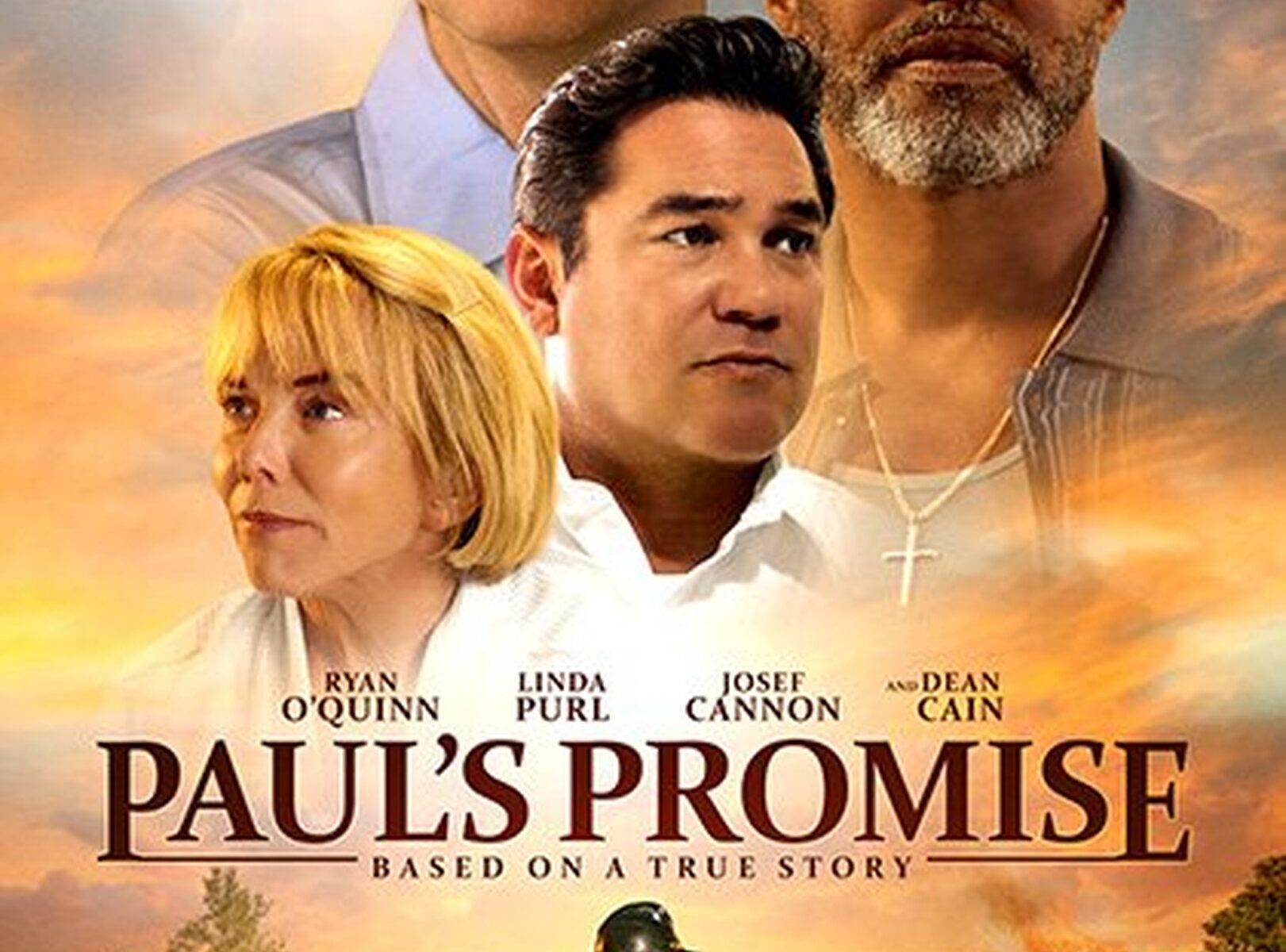 This is the movie poster for "Paul's Promise," a story based on the life of Paul Holderfield, Sr., founder of Friendly Chapel in North Little Rock, Arkansas. It opens at more than 300 theaters on Friday, Oct.21, 2022.

But now in Christ Jesus you who once were far off have been brought near by the blood of Christ. For he is our peace; in his flesh he has made both into one and has broken down the dividing wall, that is, the hostility between us…


But when he came to his senses… 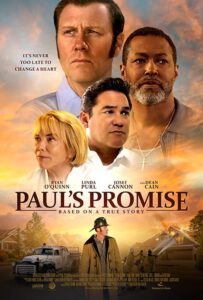 Director Matthew Reithmayr’s faith based film details the perseverance of a devout, cancer-ridden mother to bring her son back to faith in Jesus. Based on real characters, the script by Vitya Stevens does not do full justice to its subject life Paul”Brother Paul” Holdenfield’ because it portrays just a small part of his arc from racism and atheism to founder and pastor of the Friendly Chapel Church of the Nazarene. Nonetheless, for believers it will be an inspiration, but for non-believers far too religious—some critics have said “preachy,” but the religious talk is among the characters and not directed at the audience.

Set in 1967 in North Little Rock, Arkansas, the movie’s events take place against the backdrop of the Little Rock Central High School desegregation, reports of which Paul hears over his radio. Paul had apparently been a boxer (no details of this, just boyhood flashbacks to his training), but by 1967 is a member of the Fire Department. His unit is called out to fight a fire engulfing a house owned by an African American family, and when a neighbor, Jimmy Lipkin (Josef Cannon), comes up to talk with Paul, the latter refuses to acknowledge him while his fellow firefighters, all white, are looking on. In several flashbacks to Paul’s boyhood we learn how close young Paul and Jimmy (played by Parker Gunderson and Ian Harris, respectfully) were. Like most Southern whites, his father opposed the friendship, but Minnie (Linda Purl) encouraged it. That youthful friendship ended abruptly when young Paul failed his friend in a shameful way.

Many years later Paul’s mother is diagnosed with cancer, but she is more concerned for Paul and his lack of faith than her health. We learn during their many conversations that her deceased husband had been abusive to them and an alcoholic. Paul himself drinks far too much, sometimes falling asleep in a haze in a chair. His wife Barbara gets on him for neglecting their son and daughter who crave his attention. Paul says he cannot believe in a God or a Jesus who stood by and did nothing for them years ago. Her pastor Rev. Van Gorder (Steve Sladaritz) visits Mini and promises to talk with Paul, which he does, in a gentle, compassionate way. (This portrayal of a clergyman is one of the best that I have seen in a film for a long time.)

As the hospitalized Minnie sinks deeper into the grasp of her cancer she still clings to her faith, one that includes her hope that Paul will not only regain his faith but become a pastor. How he does and repairs the breech with his childhood friend Jimmy makes for inspiring viewing. Events are telescoped considerably for dramatic reasons, but they are true. Like Paul and his mother Minnie, Jimmy Lipkin is a real person important in Paul’s shucking his racism. In the film Jimmy is depicted as a strong Black man of faith, able to forgive past wrongs. There is one scene involving Jimmy and his brother Tank (Tank Jones) that especially makes this film worth seeing. Tank has become embittered by the racism of whites, so he argues against Jimmy, saying that he prefers the way of Malcolm X to that of Christianity. Jimmy offers a differently, saying “I ain’t trying to be like Malcolm. I ain’t trying to be like Dr. King either. I’m trying to be more like Jesus. I believe that’s the only way things goin’ change if we follow Him.”

The film’s release comes on the 50th anniversary of the real-life “Brother Paul” Holdenfield’s founding of the Friendly Chapel Church of the Nazarene and the soup kitchen and food pantry Feeding and Loving All Men Equally (F.L.A.M.E.). We learn this from a series of end titles, the film’s story stopping at the point of the prodigal Paul’s return to faith and accepting a pastoral vocation. It would have been good if some scenes had been added, showing Paul’s working with the youth and serving the needs of the people of the area that led to his founding of the interracial church—I think this would have helped us appreciate his earlier struggle even more. (The film is just a little over 1 ½ hours as it is.)

Nonetheless, it is good to learn of the founding pastor’s faith struggle, and that his important ministry continues under the leadership of his son, the Rev. Paul Holdenfield, Jr. This is one faith-based film that shuns the preachiness of that genre and demonstrates by the deeds of its characters what Christianity is all about—the possibility of repentance and of second chances and the necessity of reaching out to those in need for faith to be genuine.

This is in the December issue of VP along with a set of questions for reflection and/or discussion. If you have found reviews on this site helpful, please consider purchasing a subscription or individual issue in The Store.

A dying mother prays that her son will return to the church, and the son needs to seek forgiveness from a Black man he had failed when they were childhood friends.
Editor Rating ★★★★★4 out of 5
More Details