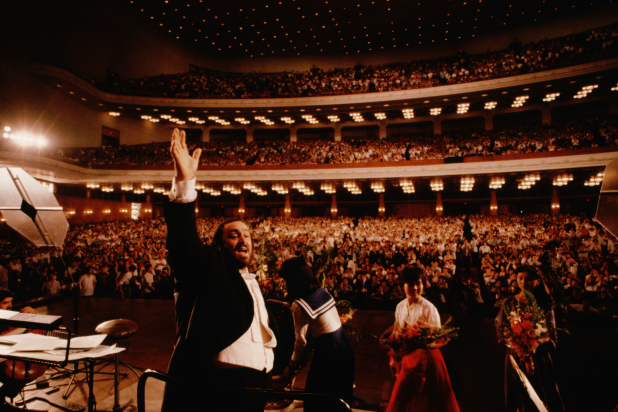 Pavarotti performs at the People's Assembly in Peking, China. (Photo by  Vittoriano Rastelli/CORBIS/Corbis via Getty Images)

Although opera lovers will be the first drawn to this biographical film, anyone who loves music will be entranced, so full of soul-stirring Luciano Pavarotti’s singing is it. Ron Howard, switching from dramatic to documentary genre, covers his life from his birth in Modena, Italy, in 1935 to his death in 2007 from pancreatic cancer. Through interviews, archival footage and numerous photos we follow his astounding career which at its peak achieved rock star status, drawing live audiences as large as 500,000 (in Central Park) and additional millions on TV.

His baker father was a good amateur tenor, the two singing together in choirs. Advised to follow a career that would sustain him financially, he studied to be a teacher after giving up his desire to be football goalkeeper. He taught school for two years, but then decided at the age of 19 to pursue a singing career. To which we might say, “Thank God!”

His phenomenal rise through the ranks of the opera world is fascinating, but his cross over into working with popular and rock musicians even more so. He was criticized by some in the opera world for associating with the likes of B.B. King, Andrea Bocelli,  Jon Bon Jovi, Bryan Adams, Bono, James Brown, Mariah Carey, Eric Clapton, Sheryl Crow, Céline Dion, Anastacia, Elton John, Deep Purple, Meat Loaf, Queen, George Michael, Tracy Chapman, the Spice Girls, Sting and Barry White. Most of these associations were a part of his generous charity work that raised millions for victims of war and hunger. He became a good friend of another celebrity known for her compassion and concern for children, Princess Diana. And Bono relates that it was Pavarotti who visited and urged him to write a song for the besieged people of Sarajevo.

The film depicts a man who loved food, music, and people, nor does it omit his failings, the chief one being his marital infidelity. His wife Adua had supported him and their daughters when he was beginning his career, but his affairs led to their divorce. His former personal assistant, Nicoletta Mantovani, much younger than he having been born in 1969, became his second wife. Even before their nuptials she had given birth to daughter Alice. This cost him some popularity in his home town. And yet Adua and her daughters Lorenza, Cristina, and Giuliana apparently have forgiven him, as we learn from their interviews.

For most viewers the segment on The Three Tenors Concert in which Pavarotti joined with Placido Domingo and Jose Carreras on 7 July 1990, the eve of the 1990 FIFA World Cup Final, will be the highlight of the film (I am listening to one of the YouTube versions as I type this.). The setting itself was splendid, the ancient Baths of Caracalla in Rome, Italy, but the music they made together was splendid beyond words. Beforehand producers had thought they might wrangle over the songs and who would sing a part that would show off their voices, but there was none of that. Rehearsals and the concert transcended all expectations. On stage their facial expressions and interactions are precious to see, the three obviously enjoying immensely singing together.

Ron Howard’s film certainly shows why this masterful singer deserved the title “the King of the High Cs.” He heartily agrees with the singer’s widow that Pavarotti did indeed manage “to bring opera to the people.” The greatest tenor since Caruso, Pavarotti was generous with his talents in helping the have-nots of the world. Some have called the film a hagiography, even though it briefly describes his personal flaws. While the filmmaker never calls his subject Saint Pavarotti, there is no doubt that Howard admires the man. Thanks to his film many others will also.

The life and loves of Pavarotti, "The King of the High C," is told, from birth through his spectacular career to his death,
Editor Rating ★★★★★4.5 out of 5
More Details