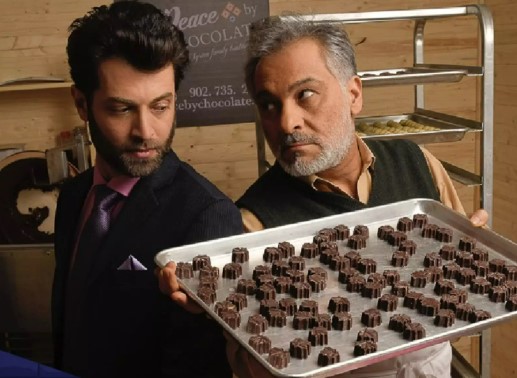 “Honor your father and your mother, so that your days may be long in the land that the Lord your God is giving you.


…I was a stranger and you welcomed me…

First-time feature writer/director Jonathan Keijser’s refugee story is as sweet as its title indicates. It touches on many of the issues that our refugee-suspicious society debates, showing that most refugees contribute to the society that welcomes them, rather, than as some fear, become a liability and threat. If you are attracted to this film first by the title’s unusual combination of “peace” with a favorite confection, then you will find even more reasons to stay with this delightful film when you when you watch it on Hoopla or various other streaming sites..

Director Jonathan Keijser and co-writer Abdul Malik tell the story of the Hadhad family whose patriarch Issam (Hatem Ali) was a leading chocolatier in Damascus Syria until it was bombed during the civil war in 2012. The family fled to a Lebanese refugee camp where at last a Canadian refugee program accepted them. Son Tareq (Ayham Abou Ammar) is the only family member who speaks English, so he arrives first, welcomed warmly by his sponsors Frank (Mark Camacho) and wife Zariah (Kathryn Kirkpatrick), who quickly thrust warm clothing upon him. Tareq had expected to be settled in Toronto, and so asks upon their arrival in Antigonish, Nova Scotia, where the town is. He had studied medicine and had hoped to be able to finish his studies in his new land. In this part of the film Tareq is a fish out of water as he strives to adapt from his Mediterranean climate to the frigid Nova Scotia winter requiring the parka and its fur-lined hood encircling his face.

The son is soon joined by his father and mother, Issam (Hatem Ali) and Shahnaz (Yara Sabri), neither of whom speaks a word of English. Thus Tareq becomes crucial for the family’s survival, with the father realizing in one poignant scene that their roles are now reversed from what they had been in Syria. (In this respect the film will remind you of Coda.) This still leaves the daughter/sister Alaa and her husband stranded in the refugee camp when her visa is denied. To the pain of their disappointed is added somewhat later the news that the son-in-law has been killed.

Tareq is disappointed when he applies to Canadian medical schools and they all turn him down because he cannot provide the papers detailing his studies back in Syria. A local doctor, originally from Syria, befriends and encourages him, even inviting him to speak on the life of a refugee at a conference, but apparently cannot secure a school to accept him. Meanwhile, Issam starts cooking up chocolates in the kitchen of the home to which they have been assigned—the house is made possible by the subsidy given to refugees by the Canadian government for a limited time, one year.

All agree that it is the finest chocolate they have tasted. Much better than that made by the town’s established

chocolatier Kelly (Alika Autran). When Issam enters her shop and tastes a sample, he knows he can improve it. But when he walks behind the counter to get to her chocolate wheel, she is unable to understand his words and moves to prevent him. Tareq arrives and escorts his father out, the old man protesting that he can improve her product. Encouraged by Frank, Issam and Tareq start selling bags of chocolate after church, the number of their customers rapidly increasing as word of their high quality spreads—indeed so much that Kelly starts losing business.

Although Tareq has agreed to manage his father’s business—Frank even arranges for a small shed to be built to serve as a chocolate store—he still longs to become a doctor. This father-son conflict moves to the front and center, Tareq showing it visually by always refusing to taste a sample that Issam offers him after concocting a new kind of sweet. The reputation of the chocolates grow, aided by the catchy name of the company, Peace By Chocolate. One little bit of humor consists of the postman pointing to the sign at the tiny store and declaring that they have misspelled the first word, it should be “P_I_E_C_E.”

The fame of the company spreads, to the extent that Premier Justin Trudeau mentions it as a refugee success story in a speech at the United Nations. Issam is even approached by the head of a national Canadian grocery firm who wants to partner with Peace by Chocolate. Issam summarily dismisses him, much to the consternation of Tareq. The father does not want to give up any of his independence, which he thinks would happen were he to accept the offer. The way in which this and the conflict between Tareq’s ambition and his father’s desire are resolved ought to please all viewers.

However, not everyone is so pleased and accepting as Frank, with Kelly, the native chocolatier whose business has been taken away, being the Syrians’ chief critic, her criticism being a mixture of xenophobic nativism as well as business anger. This theme is not followed up—you need to see Alamo Bay for an exploration of this issue. The film might have been stronger had Kelly’s character been developed a little more, as well as the what ultimately happened to her failing business.

Instead of xenophobia, Peace by Chocolate stresses the Canadian propensity for warmly welcoming outsiders, just like in the film about the sheltering of airline passengers during the aftermath of 9/11 in the 2017 film version of the Broadway play Come From Away. Frank could be the poster boy for warm Canadian generosity and welcoming spirit. He always seems ready to help if possible, or at the least to offer sympathy.

I have learned from various sources that this now well-established chocolate company does far more than support its founders, the company giving a percentage of its profits on certain candies to support other refugees, as well as providing employment for several dozen. This quote from a newspaper sums up well  its owners’ intent, “’At the end of the day, we are not in the business of only making chocolate; we’re in the business of making peace,’ says Hadhad, who hopes to continue spreading this message, one chocolate at a time.”

No wonder that Canadian filmmaker Jonathan Keijser, now based in Los Angeles, wanted to return to his native region to tell this inspiring story!

In this true refugee story a son's dream of becoming a doctor conflicts with his father's need for him to join in his chocolate business because only the son can speak English.
Editor Rating ★★★★★4.5 out of 5
More Details