Skip to content
Rated PG. Our ratings: V-4; L -0; S/N -1. Running time: 1 hour 46 Min.
I hereby command you: Be strong and courageous; do not be frightened or dismayed, for the LORD your God is with you wherever you go.’
Joshua 1.9
Do not seek your own advantage, but that of others.
1 Corinthians 10.24 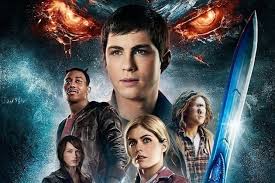 To go back to the beginning of the story, Percy and three other half bloods (as the children of a god and a mortal are called) were being chased through the forest as they attempted to make their way to the safety of Camp Half Blood. As their pursuers gain on them, Thalia stops, telling the others that she will hold off their enemies while they get away. Percy (Leven Rambin), son of the sea god Poseidon, and his two friends, Annabeth (Alexandra Daddario), daughter of Athena, and Grover (Brandon T. Jackson), a satyr, reluctantly press on to the camp. Thalia is killed, but even in death she serves her friends by turning into a mighty tree that sheds a barrier around the camp, protecting it from intruders.

There are lots of adventures ahead for them all, including a quest for the famous Golden Fleece, to be found somewhere in the Sea of Monsters, a.k.a The Bermuda Triangle. This is reached by a long taxi ride with a stop over in Washington D.C. where the UPS store is really the Olympus Parcel Service run by the messenger god Hermes. He asks them to speak with his estranged son Luke who is on the opposing side of the Quest. It seems that with the Fleece Luke, angry that his father had always neglected him, can awaken from his tomb the Father of the Gods Kronos, and…well, it all gets complicated, but lots of excitement.
Going into the film I was not too keen on the idea of glorifying old pagan gods and their offspring, but when it became obvious early on that these demigods had values—beginning with Thalia’s sacrificing her life, and then Percy during a training game making a smaller but similar sacrifice for the sake of another–I was won over. The characters might be pagans, but their values and deeds are very much like those taught by Christ. With its emphasis upon teamwork and friendship, as well as toleration of those who are different, this is a good film for young and old.

For Reflection/Discussion
These questions are to help caregivers discuss the film with young viewers. They should not be all used at once, but worked into a discussion that might begin with, “Tell me what you think of this movie…” Note that question 5 contains spoilers.

1. Which of the ancient Greek demigods does Percy represent? What did he do in the first film that Perseus did in the myth? (Yes, kill Medusa whose stare could turn a person into stone.)
2. This is a film that takes old gods and goddesses and makes them heroes today. How were the old gods very different from the God whom Christians (as well as Jews and Muslims) worship? How are the old stories—myths we call them—more like fairy tales?
3. Who in the film thinks of others and makes a sacrifice for them?
Thalia—how does she give everything for her three friends?
Percy—On the tower in the race to the top what does he do when a camper is in
trouble?
Tyson—When a villain shoots at Percy, what does Tyson do?
4. Why do you think Clarissa and her followers are so mean to Tyson? Do you know someone who was treated badly because they were different? In what way were they not like others—a dark skin; could not speak well; dressed differently; were handicapped in some way; or—?
5. In the fight against Luke and his zombie crew in the Sea of Monsters Percy and his rival Clarissa grow to respect, and then to like, each other. How do you think Percy’s refusal to hold a grudge against her help them become friends? What do you think of Percy’s letting her take the Golden Fleece back to Half Blood Camp and receive the honor of bringing it back? Who really deserved the most credit? How is what Percy does an act of true friendship?