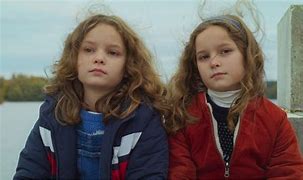 Has God forgotten to be gracious?
Has He in anger shut up His tender mercies? Selah

And I said, “This is my anguish;
But I will remember the years of the right hand of the Most High.”

Céline Sciamma has written & directed a memorable—whether parable, ghost story, or fairy tale I cannot say—that depends entirely on two child actors for its effect. And do Joséphine Sanz (as Nelly) and her sister Gabrielle (as young Marion) deliver! For those wanting to explore childhood love, loss, grief and innocence through the eyes of an 8-year old girl this is the film!

The film begins with Nelly (Sanz) entering several rooms of a nursing home and saying “Goodbye” to the residents. In the last room her mother is removing Marion (Nina Meurisse) is packing away the belongings of her mother who has just died after a long illness, Nelly’. The two with husband/father  (Stéphane Varupenne)  go to the deceased grandmother’s house to sort through the deceased house and prepare it for a new owner. Marion is devastated by the loss, having grown up there as a child, an only daughter like Nelly. She mentions a secret tree house she had built in the woods. She is so overcome by her grief that she returns to the city, leaving Nelly with her father (Stéphane Varupenne) to finish with the house.

Nelly goes to play in the woods, where she sees at a distance a young girl (Gabrielle) building a tree fort out of branches. The girl waves and when they approach one another says that her name is Marion. Hmmm. No coincidence here—as the girls play together over the next few days, Nelly accepts the fact that Marion is indeed her mother at the same age as herself. They visit back and forth, with the houses identical except for a few differences in furnishings and wall paper.

Usually in a movie involving people of different times meeting there is magic or a sci-fi device (such as the great car in Back to the Future), but Ms. Sciamma leaves it to us—maybe its all in Nelly’s inquisitive mind)—to decide on what is happening. Virtually all of us when we were young have wondered what were our parents like as kids; if we are lonely, were they too? Did they fear and feel the same things that we do?

As an only child myself who experienced loss close to Nelly’s age (divorce rather than death, but still leaving one with a profound sense of loss), I relate closely to Nelly’s and her mother’s sense of loneliness. This tender film reaches deep into our hearts, perhaps rekindling old feelings, and certainly making us sensitive to others around us. In the Scripture above we see that the Psalmist experienced anguish similar to Nally’s—indeed anything that a human being can feel, from extreme joy to despairing grief can be found in that book. For the Psalmist God and the memory of God’s loving favor are the balm for healing sorrow. We see no trace of religion in Nelly’s family, and yet her conjuring up her mother as “petite maman” (or “little mom”) is comparable to the experience of the author of Psalm 77. In her encounter with her petite maman she is able to discuss, ask questions of, and enter into play in ways that she cannot with her adult mother. There is a scene in which the two row a boat on a lake and pass through a tunnel of a floating pyramid that is joyfully magical.

Although at 73 minutes it is less than half as long as a Marvel Comics film, it is twice as powerful (even with no CGI effects) and should linger longer in the memory.

A magical tale in which a lonely girl during a period of grief meets in the woods her mother at the same age as she.
Editor Rating ★★★★★5 out of 5
More Details