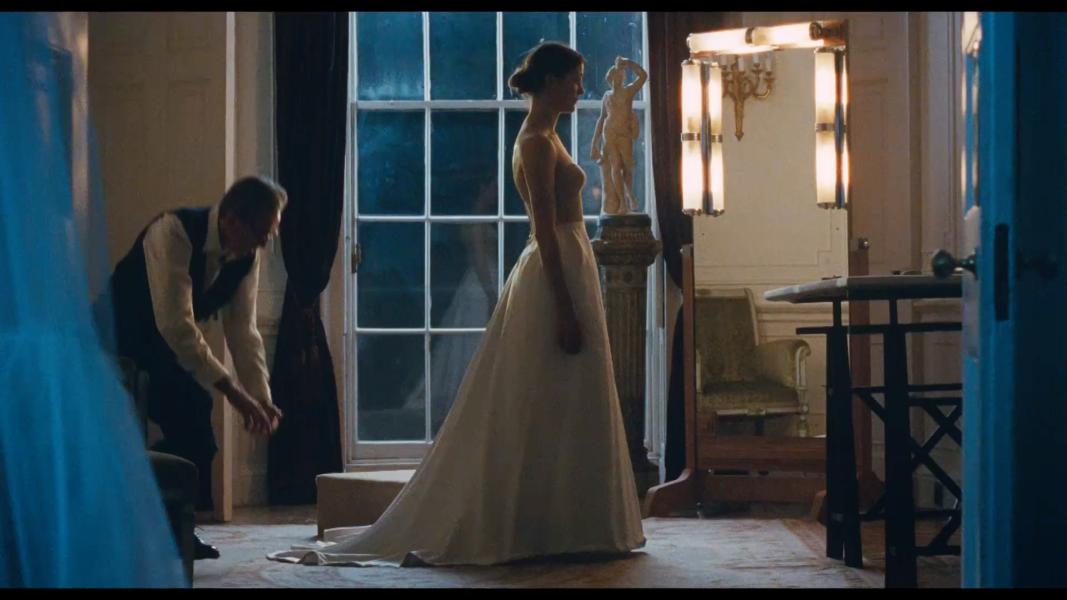 And why do you worry about clothing? Consider the lilies of the field, how they grow; they neither toil nor spin, yet I tell you, even Solomon in all his glory was not clothed like one of these. But if God so clothes the grass of the field, which is alive today and tomorrow is thrown into the oven, will he not much more clothe you—you of little faith?

World-renowned dressmaker Reynolds Woodcock (Daniel Day-Lewis) and his sister Cyril (Lesley Manville) would scoff at the words of the Galilean carpenter, no doubt considering him as attacking their lucrative livelihood. It is doubtful even if they had lived in the same century and country that their paths would ever cross. They moved in very different circles. Brother and sister were accustomed to dressing royalty, society grand dames, and debutantes, whereas the people among whom Jesus moved could barely afford two garments, not the closet-full owned by patrons of The House of Woodcock. I can imagine Woodcock designing clothing for the wife of the rich young ruler but could never see him approaching the prophet from Nazareth inquiring about eternal life.

The title is intriguing, referring to the designer’s sewing phrases into the lining of a garment that only he knows about, as if he believed he is imparting some mystic aura or power. As we see in the first part of the film, Reynolds is like a spider sitting at the center of its web, regarding everyone else as being there to serve his interests. His clients exist to feed his ego and enrich his coffers. Young women to whom he is sexually attracted are invited in to live with him if they do not disrupt his obsessively maintained regimen. He eats his breakfast in silence with Cyril sitting watchfully across from him while he reads the morning newspaper. When a current live-in mistress scrapes her toast too loudly, he erupts in anger and scorn, and soon she has been dispatched by Cyril from the premises.

Then comes the day when Reynolds’s tightly controlled life is upended. During his stopover for breakfast at a country inn he spies a comely waitress. Alma (Vicky Krieps) is a shy somewhat awkward woman with a German accent. When she is able to memorize his menu requests, the impressed customer offers and she accepts his invitation to dinner. He does most of the talking, mainly about his mother and his dressmaking, and soon she is accompanying him to his multi-storied town house. But it is not for a sexual tryst—at least not yet. Reynolds has her remove her dress, not for sex but for measurements. He takes up needle and thread to create a dress for her—well, no, really it is for himself. Everything this man does is for himself.

Alma thereafter finds herself a part of The House of Reynolds, Reynolds’s muse and mistress at night, and during the day helping his extensive crew of dressmakers in any way she is bidden. Because of her beauty she also models his clothes for his fashion shows. Soon aware of his volatile temperament and dismissals of past lovers, Alma soon develops the strength of character to stand up to him during his stormy tantrums. Alma dares to ask what his other lovers had not, “Why are you not married?”  to which he replies, “I make dresses.” She chuckles as she asks, “You cannot be married when you make dresses?” “I’m certain I was never meant to marry. I’m a confirmed bachelor. I’m incurable.”

Alma manages to find the “cure,” but they do not settle into marital bliss, their inevitable conflicts increasing in ferocity. Alma, refusing banishment, becomes as deadly in her efforts to maintain her place in his life as any femme fatale in a film noir—beware of her mushroom meals!

Daniel Day Lewis initially received all the attention, due both to his great skill as an actor and his announcement that he would retire from acting after this film was released. But as soon as the film was available for viewing, critics picked up on what for most of us is a new face, Vicky Krieps, who easily stands up to Lewis in their scenes together. The film is as much about Alma, whose journey from quiet ingénue to fierce warrior for her rights, as it is about Reynolds. Indeed, Leslie Manville is also formidable as Cyril, who has been used to being the one woman constantly in her brother ‘s life, in the past able to get rid of any woman threatening to become a rival. The dynamics between her, Alma, and Reynolds are fascinating to watch

The film is a delightful mixture of the serious and the comic, an example of the latter being when a rich, portly matron gets drunk while wearing his dress at a wedding. Reynolds, considering himself as an artist faced with sacrilegious behavior, marches up to her hotel suite where she has flopped into bed, and with Alma’s help, strips the dress from her sleeping body, despite the protests of the woman’s servant.

As a study of characters engaged in a power struggle, this is a film well worth seeing. Reynolds Woodcock is a man who thinks he is the center of the universe—until he comes upon a woman who is as strong-willed as he. He should have taken more notice of her warning during their first encounter—that in any staring contest she would win. Or maybe he did. Maybe those words belied her seemingly meek demeanor, perhaps reminding him of his deceased dominant mother.  From his talk about and his vision of his mother that he has during a fever brought on by his eating poisonous mushrooms, we see the huge influence she has had in shaping his life. Now it will be Alma, the only woman aside from his sister Cyril able to stand up to him.  We are left to ponder the future of the couple’s—no, the trio’s—unholy alliance. What kind of a future awaits them? Certainly not that promised by the conclusion of the typical romantic film. This is not a tale of star crossed, but of star colliding lovers

An arrogant London dress designer used to his own way, who lives with his sister, takes on a new model and lover who proves to be his match.
Editor Rating ★★★★★4 out of 5
More Details