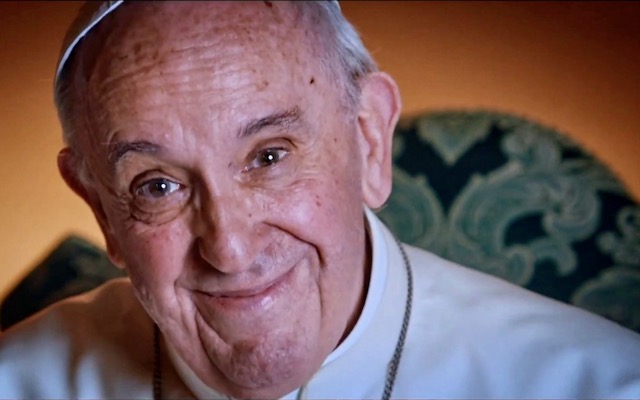 A cheerful look brings joy to the heart…

How happy are the humble-minded, for the kingdom of Heaven is theirs!

Wim Wenders’ new documentary is not a biographical film, but in a sense, a road trip film in which we are companions of the man who heads the Roman Catholic Church. We are invited along to witness this amazing man’s journeys throughout the world. Equipped with a warm smile and arms outstretched to embrace everyone, Pope Francis travels to Buenos Aires; St. Peter’s Square, where on March 13th, 2013, a vast crowd cheers as the Cardinal of Buenos Aires, Jorge Mario Bergoglio, just elected as the 266th Pope of the Catholic Church, greets them in Spanish. In NYC he addresses the United Nations; in Philadelphia he reminds those at a men’s correctional facility that the first saint was a prisoner, whom Jesus promised a place in Paradise; after a devastating typhoon, Pope Francis brings hope to the throng of Filipino people; in Africa he comforts parents and children at a hospital; in Israel at the Holocaust Memorial he joins with those who say “Never again!” and he prays at the Jordan River; in Washington, DC he urges the members to stop the arms trade and to welcome refugees; on the coast of southern Italy he meets some of those fleeing from war and poverty; at Ground Zero in lower Manhattan he stands with leaders of many faiths against hatred, as he does later with a similar inter-religious group at Assisi, Italy.

Wenders offers us almost nothing on the early life of Jorge Mario Bergoglio or of his time as Archbishop of Buenos Aires, his concern being on what his subject says and does now.* He does, however, in black and white sequences that appear to be from a vintage Life of St. Francis, shows us the great saint who inspires his every word and deed, the film opening with lovely shots of the hill city of Assisi, its glorious Basilicas with Giotto’s famous murals of the Saint, followed by the scene of the call of Francis while he is praying in the small church just outside the walls of Assisi. There are several other B&W sequences scattered throughout the film.

Social justice advocates will want to see and reference this film because of this pope’s strong advocacy of issues such as helping the poor, welcoming of refugees, and protecting the environment. He strongly denounces “the plunder of the earth,” and in his encyclical on ecology “Laudato si” he quotes St. Francis’s “Canticle of the Sun.”

When it is available on DVD, short clips from this film can be used to start or conclude a sermon, so many of them being quote-worthy. Here are a few memorable ones:

“Tenderness makes us use our eyes to see the other, our ears to hear the other.”

“Tenderness is not weakness, it is strength.”

“God does not see with his eyes. God sees with his heart.”

“The future has a name, and its name is hope.”

“In all religions, the environment is a fundamental good.”

“In the world today, we have so much to do, and we must do it together.”

Perhaps thinking of his church’s history, Pope Francis declares, “As long as the church puts hope in wealth, Jesus is not there.” As the film’s title indicates, Pope Francis is a man of his word. He gave up the luxurious art-decorated papal quarters to live in a guest room. When the Vatican sent him a first-class air ticket to fly to Rome for the conclave of cardinals, he traded it for a coach class seat. And he traveled by public transport from the airport to the Vatican rather than send for a limousine. In these and other ways (such as his remark that he is not the judge of gay Christians) this pope has, as Pope John XXIII said, let fresh air into the church. Many of us believers still have disagreements (women as priests) with him, but our admiration for him far outweighs these. This pope is indeed one we can all look up to for guidance and hope in dealing with the formidable issues of poverty, hunger, the welcoming of refugees, and saving the environment.

Note: To encourage viewership, the studio is offering group tickets. For information, go to http://focusfeatures.com/pope-francis-a-man-of-his-word/groupsales

*In 2016 The National Geographic Channel aired an hour-long drama/documentary, Rebel Pope, that dealt with the Pope’s earlier life. (Reviewed in the April 2016 VP.). Also, there is a 4-part series on Netflix called Call Me Francis which does deal with his early life: I will report on in a future issue.

The documentary focuses upon Pope Francis's deep concern for the poor, refugees, the environment as he travels the world reaching out to people of all faiths.
Editor Rating ★★★★★5 out of 5
More Details